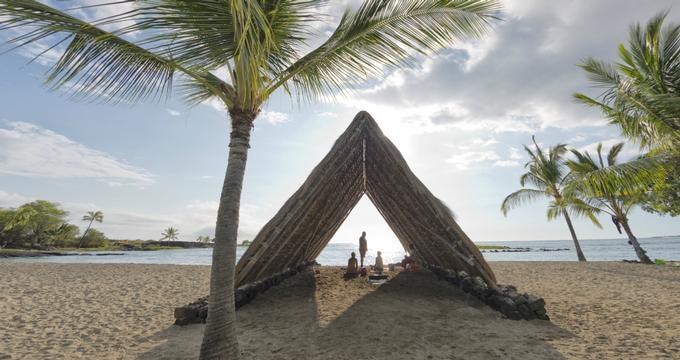 Located along 420 acres of the western coast of Hawaii's Big Island, Pu’uhonua O Honaunau National Historical Park is a National Historical Park preserving several traditional Hawaiian sites, including a pu'uhonua place of refuge, which allowed legal offenders sanctuary and forgiveness by a priest. The settlement of the Hawaiian islands is believed to date back to at least the fourth century A.D., when indigenous Polynesian settlers arrived from the Marquesas Islands.

In 1300, Tahitian settlers are believed to have conquered the islands’ existing settlements, forming much of the native culture encountered by British Captain James Cook upon his exploration of the islands in 1778. Large numbers of native Hawaiians were killed over the following century as the result of the introduction of diseases such as smallpox, measles, and influenza, and following a period of native monarchical rule in the 19th century, much of the islands’ traditional culture was Westernized as a result of the 1898 annexation of Hawaii as a United States territory, and later, its declaration as a state in 1959.

In 1955, 420 acres along the coastline of Hawaii’s Big Island were set aside as part of the City of Refuge National Historical Park, commemorating several traditional Hawaiian structures and important archaeological sites. It was renamed Pu'uhonua o Honaunau National Historical Park in 1978, and corrected for traditional Hawaiian language spelling as part of the 2000 Hawaiian National Park Language Correction Act.

Today, the park site includes a number of preserved traditional structures, historical replicas, and findings of archaeological excavations commemorating various aspects of native Hawaiian culture. A Visitor Center at the entrance to the park serves as a check-in point, offering a short orientation film and a bookstore selling handcrafted items by Hawaiian artisans. From the Visitor Center, the park expands through three traditional ahupua'a land units, with sites commemorating more than 400 years of the islands’ indigenous history.

The park’s most notable feature is its preserved traditional pu'uhonua, surrounded by a 965-foot Great Wall. The refuge was traditionally used as a sanctuary for defeated warriors and noncombatants during times of war. Through the 19th century, the pu'uhonua also served as a refuge for legal offenders who broke the culture’s kapu laws, a series of taboos governing codes of conduct related to various aspects of public and private life. Though those violating the kapu were traditionally sentenced to death, the sanctuary provided the option of absolution by a priest and release back into society for offenders who could reach the site without capture. A reconstructed replica of the Hale o Keawe temple, originally built by Kona chief Kanuha, is showcased, along with the remains of several older heiau temples.

Along Honaunau Bay, the Royal Grounds area preserves several residential and ceremonial sites used by Hawaiian ali’i royalty, which comprised one of the major political and religious centers within the island’s Kona district. Attractions within the grounds include a halau wa’a canoe house, three holua racing slides, and a site for playing konane, a traditional Hawaiian pebble strategy game which visitors may receive rules for at the Visitor Center. Nearby, the remains of Ki’ilae Village, an abandoned traditional fishing and farming village, offer a glimpse of life on the islands around the time of the arrival of European explorers.

Several hiking trails are provided throughout the park, including the two-mile 1871 Trail through agricultural sites and backcountry areas overlooking the Keanae'e cliffs. Recreational fishing is allowed at the park, following compliance of regulations by the Hawaii Department of Land and Natural Resources. Though snorkelers are asked to avoid entering the water at the sacred Keone'ele Cove site, the nearby “two-step” snorkeling area is located just outside the park’s grounds. Green sea turtles and native bats may be seen at various places within the park, and picnicking grounds offer dramatic views of the Pacific Coast.

Ranger-led tours and excursions are offered periodically, including Hawaiian Polynesian Plant Tours elaborating on the area’s native wildlife and its role in Hawaiian culture. Field trips for student and scout groups are offered, incorporating curriculum requirements into guided tours, and a Junior Ranger program allows youth visitors to complete park activities in exchange for a completion badge and certificate. A Hawaii Island National Parks Adventure Book is also provided for families visiting other nearby National Parks on the Big Island.

More Things to Do in Hawaii