Things to Do in Hawaii: National Memorial Cemetery of the Pacific 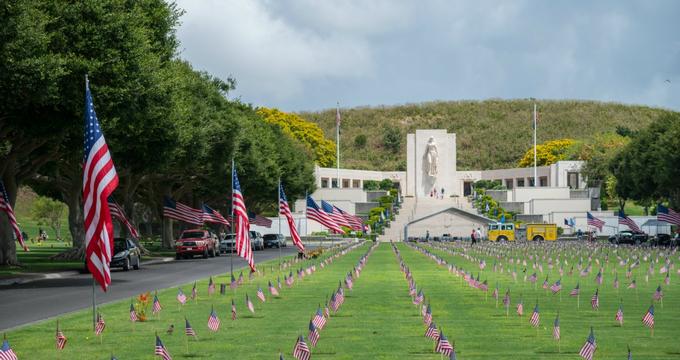 The National Memorial Cemetery of the Pacific is located in the unique location of in a crater in Honolulu, Hawaii. It serves as a site to honor men and women who have dedicated their lives to serving the United States Armed Forces. The beautiful extinct volcanic tuff cone that surrounds the cemetery is named Punchbowl Crater and is 116 acres of land and stands at 546 feet. The grounds are listed on the National Register of Historic Places, and it is administered by the National Cemetery Administration. Due to its historical significance and breathtaking terrain, it is one of the most popular tourist attractions in Hawaii and attracts more than 5 millions of visitors each year.

The history behind the National Memorial Cemetery of the Pacific begins between 75,000 to 100,000 years ago when a crater resulted after volcanic activity. The first known use of the crater was as a place to offer human scarifies to the gods, and it was named “Puowaina” which translates to the “hill of sacrifice.” The area is now called Punchbowl Crater and due to its history in the 1890s a committee recommended that that area be used as a cemetery. Yet, ironically the idea was rejected for emotional fear of making a city of death above Honolulu. In the 1940s, whist in the mist of World War II, Congress authorized the extinct volcano to be the site of a national cemetery. Yet it was not until after WWII, in 1948 when Congress finally approved funding and construction commenced. The National Memorial Cemetery of the Pacific was opened to the public in 1949; over 13,000 soldiers who died during World War II were brought to lay to rest in the site. Today the cemetery is a popular place to pay respects to the dead, visit memorials and enjoy the panoramic view from Punchbowl crater.

Within the National Memorial Cemetery, visitors are able to have a diverse experience exploring the grounds and remembering the lives of Americans that died in service. The crater is a stunning site to visit because of its lush environment contrasted by granite stonework; there is even a lovely pathway that leads to popular memorials and offers a stunning view of Honolulu. There are 74 memorials located throughout the cemetery that commemorate those who were killed in action in the 20th century wars, with a special emphasis on those who perished at Pearl Harbor. The memorial walk is lined with various monuments and makers that were contributed by organizations and governments that honor veterans. One of the main features is the Honolulu Memorial; it was built in 1964 by the American Battle Monuments Commission to honor members of the American Armed Forces from the Pacific during both World War II and the Korean War. Following the Vietnam War, in 1980 more names of fallen soldiers who were buried at sea or lost were added. On the walls of a grand staircase leading up to the memorial there are over 28,000 engraved names of American heroes. Sitting at the top of the stairs is a chapel that is decorated with mosaic maps and description of accomplishments of the American armed forced in Korea and in central and south Pacific regions. Throughout all of the aspects in the cemetery, fallen soldiers are honored and their service is recognized.

Affiliated with the National Memorial Cemetery of the Pacific is the Veterans Legacy Program, which uses an educational outreach initiative to memorialize American Veterans through sharing their stories. The National Cemetery Administration has partnered with schools, universities, teachers, professors, and students to provide insights into the lives of those buried at national cemeteries, and their contribution to the American Armed Forces. Education is taught through various forms of media such as digitizing the national cemetery experience. The goal of the Veterans Legacy Program is to educate the American public about the personal, historical, and political significance of veterans.

The National Memorial Cemetery of the Pacific is a fantastic place to visit for its educational impact, historical value, and its marvelous views of Honolulu, The location provides a place to be immersed in American history as well as enjoy the natural beauty of Hawaii. It is a site of reverence to those who have given their lives while serving America, and is a historical hub to learn more about their contribution to the wars throughout the 20th century.

Back to: Things to do in Hawaii

Things to Do in Hawaii: Pacific Aviation Museum Pearl Harbor

Things to Do in Hawaii: Dolphin Quest