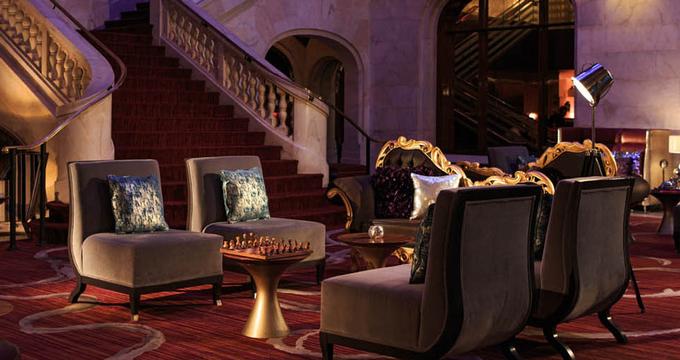 Exuding an air of style and sophistication and boasting a seamless blend of urban chic and cultural cool, the Renaissance Pittsburgh Hotel is one of the most unique hotels in Pittsburgh's Cultural District. Located in the historic Fulton Building in downtown Pittsburgh, the 14-story architectural gem, which is listed on the Register of Historic Places, offers luxurious accommodations, deluxe amenities and unparalleled service to provideboth business and leisure travelers a comfortable and stylish urban retreat.

The Renaissance Pittsburgh is conveniently located in the heart of the central downtown district with easy access to many of the city's top attractions such as the Rivers Casino, PNC Park, and Heinz Field, home of the Pittsburgh Steelers, as well as numerous restaurants, bars, museums, galleries, theaters, and shops. 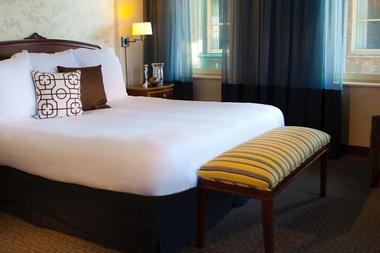 The Renaissance Pittsburgh Hotel offers 300 elegantly appointed guest rooms and suites that boast an irresistible blend of style, sophistication, and comfort. Each room is a haven of tranquility and peaceful escape away from the hustle and bustle of downtown Pittsburgh with deluxe beds dressed in plush beddings and imported linens, contemporary decor in soft, neutral hues, exceptional amenities and in-room entertainment and breathtaking views of the Allegheny River or downtown Pittsburgh.

Guests can choose from several unique rooms and suite types, from stylish King rooms with city or river views to luxurious Club Level suites, all of which are beautifully decorated and comfortable furnished. Modern amenities are standard in every room and include luxurious, imported bedding with custom duvets, down comforters and pillows, and cotton-rich linens, flat-screen LCD televisions with cable/satellite channels (including ESPN, CNN, and HBO), Internet browser and Web TV, Sony alarm clocks and iPod docking stations, mini-fridges, coffee and tea-making facilities, and complimentary wireless Internet. Private en-suite bathrooms have shower-over-bath combinations, plush bathrobes, and deluxe bath products, and rooms feature individual climate control with heating and cooling, in-room safes, electrical adapters, hairdryers and iron and ironing boards. Additional room extras include baby cribs and rollaway beds, which can be arranged on request.

City View King or Queen Rooms are 250 square feet in size and can accommodate up to three guests. These rooms feature king or queen-size beds, en-suite bathrooms with shower-over-bath combinations, plush bathrobes, and deluxe bath products, and a spacious sitting area with armchair, ottoman, and gorgeous city views.

City View Queen Rooms are 312 square feet in size and can accommodate up to five guests with two queen size beds, one rollaway bed and en-suite bathrooms with shower-over-bath combinations, plush bathrobes, and deluxe bath products. Sitting areas have ottomans and armchairs and look out over downtown Pittsburgh. 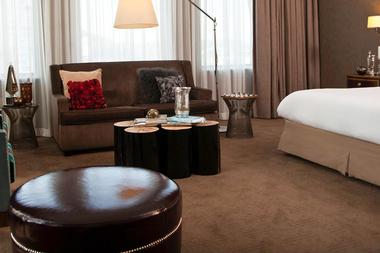 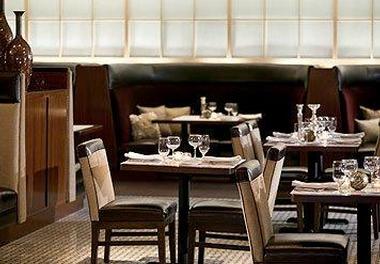 The Renaissance Pittsburgh Hotel is home to Braddock's Pittsburgh Brasserie - one of the best downtown Pittsburgh restaurants which attract locals, visitors and foodies alike to savor their diverse and creative cuisine. Braddock's serves an award-winning menu of European and American cuisine with a distinct Pittsburgh twist in a vibrant and inviting atmosphere with a homely feel. The menu features starters of Jumbo Lump Crab Cakes and Tuna Tartare, entrees of Sauteed Walleye, Bouillabaisse Rouille, and Filet Mignon, and decadent desserts of warm fudge brownies, apple crisp, and delicious chocolate cake.

Adjacent to Braddock's Pittsburgh Brasserie is Braddock's Street Side Bar, which is named in honor of the famous “Whiskey Rebellion” of 1794 and is home to the most extensive bourbon collection in Pittsburgh. The favorite bar celebrates the city's famed cocktail and whiskey culture with a menu of fine whiskeys and bourbons, and original versions of classic cocktails. 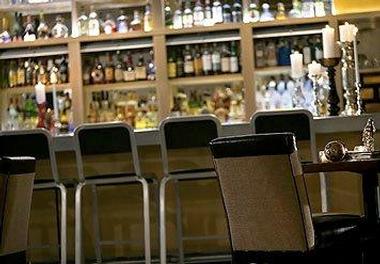 The Renaissance Pittsburgh Hotel offers an array of exceptional facilities, amenities, and services for guests to enhance their stay. A state-of-the-art 24-hour fitness center is fully equipped with the latest in gym equipment, cardio machines and free weights for keeping fit and an onsite business center features Apple and PC computers, printing, copying and fax services and complimentary wireless Internet.

Other hotel services include daily housekeeping, room service, valet dry-cleaning services, morning newspaper delivery on request, direct dial telephones with free toll-free calls, safety deposit boxes in each room and at the front desk, foreign exchange and ATM nearby and a Concierge Club for Elite Members. 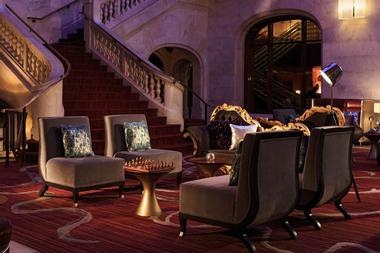 The Renaissance Pittsburgh Hotel offers a unique setting for romantic weddings, anniversaries or milestone celebrations. The hotel boasts several stunning venues that blend the timeless elegance of the historic building with a chic, contemporary style such as the magnificent 3,500-square-foot Symphony Ballroom with its spectacular floor-to-ceiling windows that overlook the Allegheny River and PNC Park. The hotel also offers a range of wedding services and packages that include professional planning services from certified event specialists and wedding planners, customized catering menus, table and seating arrangements and additional concierge services for guests staying at the hotel.

The Renaissance Pittsburgh Hotel is also an ideal venue for business meetings, conferences, and corporate functions, with over 10,000 square feet of technology-rich, versatile venues that can cater for small, medium and large-scale events and functions. Ten modern and stylish meeting rooms feature state-of-the-art technology including audiovisual equipment, projectors, high-speed wireless Internet access and staging capabilities, as well as flexible seating, personalized catering menus, and an array of support services including the hotel's business center services. 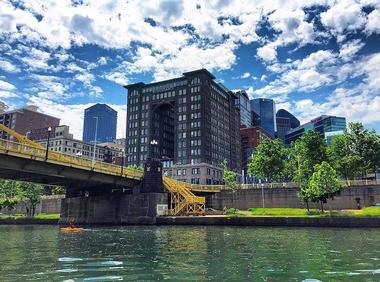 Resting on the banks of the Allegheny Riverfront in the cultural heart of the city, the Renaissance Pittsburgh is ideally situated for exploring all the city has to offer and enjoying its many attractions, many of which are within walking distance of the hotel. The hotel is based in the midst of the city's artistic and cultural renaissance and is surrounded by inspiring art galleries, iconic theaters, and trendy restaurants from the renowned Andy Warhol Museum to the Heinz Field, home of the Pittsburgh Steelers.

The city as an extensive arts, culture and entertainment scene and is home to famous theaters and museums, including the Andy Warhol Museum, theByham Theater, the Benedum Center for Performing Arts, the Heinz Hall for the Performing Arts and the Frick Art Museum. Other notable museums and theaters include the O'Reilly Theater, the Phipps Conservatory, and the Silver Eye Center for Photography.

Back to: Best Things to Do in Pittsburgh, Pennsylvania and Weekend Getaways in Pennsylvania.