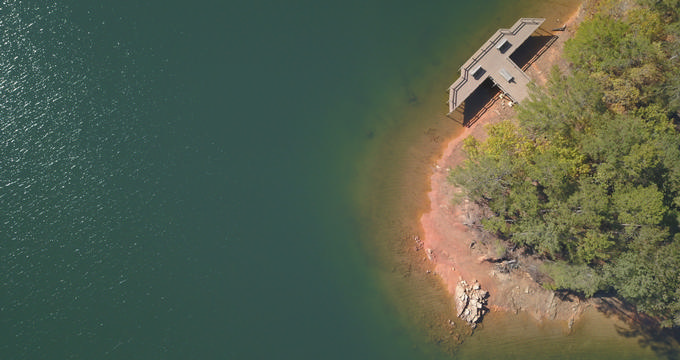 Around thirty miles outside of Atlanta, Georgia is Lake Lanier. Named after American poet Sidney Lanier, this reservoir was built by US army engineers as a means of flood control. Over the years, Lake Lanier has grown into a popular tourist spot with families, outdoor enthusiasts, and anglers. Fishing at Lake Lanier can be a thrilling and rewarding experience, often resulting in some very impressive and frequent catches. Certain attractions may be temporarily closed or require advance reservations. Some restaurants are currently offering pickup only. Hours/availability may have changed. 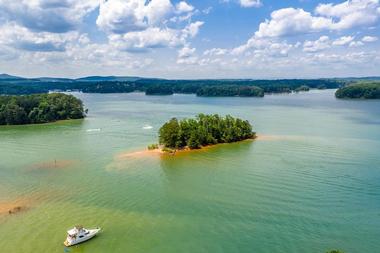 Lake Lanier has a surface area of 37,000 acres and nearly 700 miles of shoreline, offering countless fishing opportunities to keen anglers of all ages and experience levels. There are 90 different parks spread out along the shores of the lake, many of which have proven to provide excellent yields for fishermen. As a man-made reservoir, Lake Lanier has been stocked with various species over the years by The Georgia Game and Fish Commission. 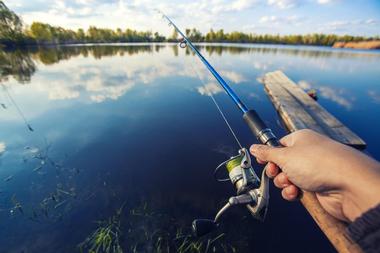 With dozens of different parks and beaches all along Lake Lanier’s enormous shoreline, anglers have a huge array of options when deciding where they want to set up for their next fishing adventure. Here are some of the top rated fishing spots at Lake Lanier, guaranteeing high catch rates and giving you the best chance of nabbing a ‘big one’.

As the name suggests, West Bank Park is situated on the western bank of Lake Lanier, not too far from Buford Dam at the southern end of the lake. This part of the lake tends to have the deeper and cooler waters, making it a prime spot for bass and carp fishing, especially at cooler times of the year. The park features a fishing jetty and is also a popular picnic spot, making it a great base for a day of Lake Lanier fishing.

This park is located up near the northern end of Lake Lanier. This is where you'll find more river channels, shallows, flat points, and rocky areas, ideal for the likes of trout and catfish. It's also renowned as one of the best Lake Lanier spots for both largemouth and smallmouth bass fishing. This park is very popular and family fishing derbies are sometimes held here.

Not far from the center of Lake Lanier, Duckett Mill Park is the place to go if you're looking to try and reel in a wide variety of fish. Lots of different species can pass through the waters around this area, including catfish, bass, trout, and others. The park is also a lively area of Lake Lanier, featuring toilets, showers, picnic tables, a boat ramp, and more. There's even a general store and restaurant just a short walk or drive away, making this an ideal location for an all-day fishing session at Lake Lanier.

You are reading "Best Lake Lanier Fishing" Back to Top 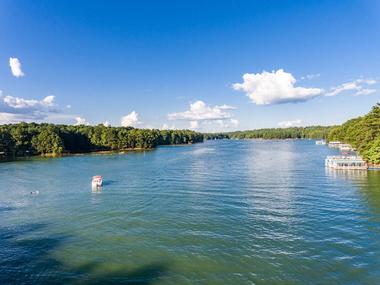 Due to the unique layout of Lake Lanier and its enormous size, it can be a frustrating place to fish for newbies. Even with experience, it’s easy to find yourself fishing in a spot for hours on end without any returns. That’s where fishing guides come in. Various fishing guides operate in the Lake Lanier area, offering tips, tours, and guidance to all the best fishing spots around the lake.

This all-year round fishing guide service is run by Captain Clay Cunningham. With many years of experience, the Catching Not Fishing staff know the lake better than almost anyone else and are determined to help you make the most of your Lake Lanier fishing trips. They know all the best spots, especially for stripers and spotted bass, and can almost guarantee that you'll be reeling them in within no time at all.

You are reading "Best Lake Lanier Fishing" Back to Top

Attractions at Margaritaville include the water park, Paradise Beach, Landshark Landing and boating. The water park offers fun for all ages. A Fun Zone includes a shallow pool with a playscape area for toddlers and smaller children, and a sandy beach for sandcastle building. Families can relax in lounges poolside under shade tents., children enjoy foam parties, and adults can visit the onsite bars.

The Wild Waves Wave Pool is the largest wave pool in the state of Georgia. Guests can play in the waves, or stay in the shallows for a more relaxing experience. Inner tube rentals are available for wave riding, or simply floating. Thrill rides at the park include tube rides such as the Raging River ride, which simulates a journey down white water rapids. Twister shoots riders through a 360 loop, then down a tunnel to a final downhill into the pool below. CAT 4 is a racing slide in which four riders on tubes compete to reach the bottom fastest, through bubbles, past the “chill zone,” and above Paradise Beach. Body rides include the Double Down, a side-by-side slide for a competitive splash to the bottom, and the Intimidator and Triple Threat, two of the park’s fastest, most thrilling downhill slides.

Additional attractions include the Thunderbolt Triple Zip. The Zip Line carries guests over 50 feet in the air above Paradise Beach. Paradise Beach is one half mile of sandy lakefront where guests can play beach volleyball, try stand up paddle boarding, kayaking or wake boarding, or make use of the Battle Ball Court. Battle Ball places players in giant inflatable balls to flip and roll across the beach.

Flyboarding is a water sport that incorporates hydroflight devices to allow guests to hover, dive and fly through the air above the lake. In addition to the original Flyboard, guests at Paradise Beach can try the Flyboard hoverboard or Flyride with 45 or 60 minute lessons.

A Chill Zone at Paradise Beach is home to several restaurants, snack bars and tiki bars. Dining options include Mexican food at the Paradise Cantina, burgers and fries at the L2C Grill, shrimp baskets, conch fritters and chicken wings at the Feeding Frenzy Fried Shack, or pizzas to go at Frank and Lola’s.

The Landshark Landing Beach is home to the Landshark Landing Bar and Grill. The beach is adjacent to dock space at Landshark Landing, making it easily accessible for visitors arriving by boat. Landshark Landing is home to the park’s evening entertainment, which includes live music performances and parties celebrating holidays, the full moon, beer and wine festivals and more. Outside the Independence Day fireworks show, the most popular holiday event is the annual Christmas display, Magical Nights of Lights. In addition to a driving tour of Lake Lanier’s best holiday lights, the event, which lasts from November through January, includes a bubble ice skating rink at Margaritaville, where guests skate through bubbles resembling snow.

History: LanierWorld first opened on Lake Lanier as a family owned resort business in 1987. In 2005, the resort was purchased by the Lake Lanier Islands Management Company. The company holds a long-term lease agreement with the Army Corps of Engineers, who owns the lakefront land. In 2018 LanierWorld reached a partnership deal with the Jimmy Buffet brand, Margaritaville, to infuse the resort with a multi-million dollar facelift and rebranding. Still under the same management company, the resort’s facelift included the addition of several new restaurants and an RV park suitable for larger sized luxury motor homes. Margaritaville resorts are also located in the Bahamas and Las Vegas.

The 38,000-acre Lake Lanier was formed when the Chattahoochee River was dammed in 1956, and is used for flood control and as a reservoir, operated by the Army Corps of Engineers. The Lake Lanier islands, originally large hills, are the largest chain of islands in the lake.

You are reading "Best Lake Lanier Fishing " Back to Top

Throughout the summer of 1863, Union forces under the command of General William Rosecrans advanced toward the city in an attempt to seize control of Confederate supply lines, causing Confederate General Braxton Bragg to abandon the city. Rosecrans assumed a Confederate retreat to Atlanta, and as such, ordered his men to follow the troops into Georgia. However, the surprise meeting and attack of the two battalions in the farming fields near Chickamauga Creek in late September, known as the Battle of Chickamauga, resulted in mass casualties for both sides, totalling in the second-highest number of casualties during the war after the Battle of Gettysburg.

After their defeat in the Battle of Chickamauga, the Union soldiers retreated to Chattanooga to plan a strategic campaign of maneuvers under the direction of Major Generals Ulysses S. Grant and George Henry Thomas. From November 23 through November 25, the seizure of Orchard Knob, the Battle of Lookout Mountain, and the Confederate retreat from Missionary Ridge into Georgia ensured the complete Union control of Chattanooga’s rivers and railways. The Chattanooga Campaign is widely considered to have signaled a “death knell” for the Confederacy, as Union control of Tennessee directly led to Major General William Tecumseh Sherman’s Atlanta Campaign of 1864, which precipitated the end of the war the following year.

In 1890, four military parks commemorating seminal Civil War battle sites were authorized by the United States, including the Chickamauga and Chattanooga site, the first and largest park in the series. Development of the park is credited to the efforts of Generals Ferdinand Van Derveer and Henry Boynton, who lobbied heavily for preservation of the battlefields. Supervision of the park was transferred to the National Park Service in 1933.

Today, the park preserves 8,973 acres of battlefield land throughout eastern Tennessee and northern Georgia, primarily within Hamilton, Catoosa, Dade, and Walker Counties. Two visitor centers serve the park, located at its western and southern ends. The Chickamauga Battlefield Visitor Center, located in Fort Oglethorpe, Georgia, serves as an entrance point for the attractions of Chickamauga Battlefield, and offers several Civil War exhibits, including the Fuller Gun Collection, one of the most noted displays of military small arms in the country, and the 26-minute Campaign for Chattanooga: Death Knell of the Confederacy orientation film. At the Lookout Mountain Battlefield Visitor Center, located in Lookout Mountain, Tennessee near Point Park, visitors can see the historic painting The Battle Above the Clouds, painted by battle eyewitness James Walker. The nearby Ochs Museum, located inside Point Park, contains exhibits about Civil War photography, signal, and communications operations.

Four main historic battlefield areas are preserved within the park, including Chickamauga Battlefield, which may be explored via a seven-mile automobile tour loop. Major sites include Viniard Field, a major battle site on September 19, and Horseshoe Ridge and Snodgrass Hill, the site of the Confederacy’s final battle victory. An audio tour is provided via cell phone, elaborating on the history and significance of the battle sites. Visitors may also seasonally climb Wilder Brigade Monument for a full view of the battlefield area. Other battlefield areas commemorated within the park include Lookout Mountain, Missionary Ridge, and Moccasin Bend.

Curriculum-based field trip programs are offered for student and scouting groups, led by park rangers. A Junior Ranger program provides badges and certificates in exchange for completion of independent activities on the park’s grounds, and a Civil War trading card program offers collectible cards commemorating important historical figures and sites connected to the park. Periodic special events include guided hikes, biking tours, and canoe and kayak excursions presented in correlation with the Friends of Moccasin Bend and Outdoor Chattanooga organizations.

More Things to Do in Georgia

You are reading "Best Lake Lanier Fishing " Back to Top

25 of The Coolest Green Trips

25 of the Most Beautiful Mountains in Utah