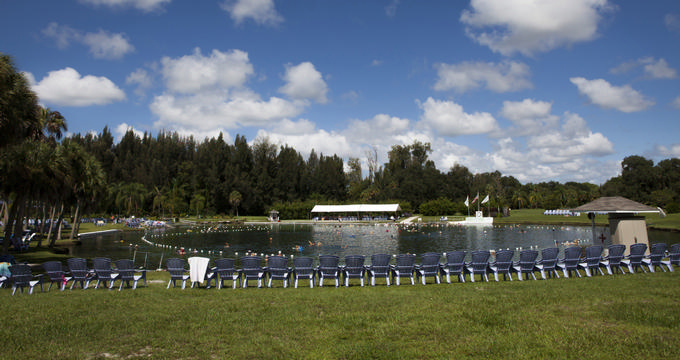 Warm Mineral Springs is located in North Port, Florida. The sinkhole is filled with water from several springs and is the only warm water spring in Florida, making it geologically significant. Native American remains found there make it culturally significant as well. The site, which some claim is the fountain of youth sought after by Ponce de Leon, is open for swimming. A full menu of spa services is also available, including massages, facials, waxing and skin care.

Formed by the collapse of a cavern some 30,000 years ago, Warm Mineral Springs is a 236-foot diameter swimming hole with a depth of 230 feet. The spring’s primary source of water is a 207-foot deep vent that emits over 20 million gallons of 83 degree mineralized water daily. Although the source of the water is unknown, it is known to contain chloride and hydrogen sulfide as the primary minerals, and virtually no dissolved oxygen. Traces of over 51 minerals make it the most heavily mineralized springs in the continental United States. 5 to 7 million gallons of water overflow from the sinkhole daily, ultimately running off into the Gulf of Mexico.

Approximately once every 10 years, the water in the sinkhole turns crystal clear, when heavy winter rains change the hydrostatic pressure on the water table, and clear, cooler water is released into the springs. In 2015, when this last occurred, visibility in the natural pool increased to over 140 feet. Normally, visibility is 8-10 feet. The phenomenon has been studied by the US Geological Survey and the Department of the Interior.

The historic 1950’s buildings servicing the springs were most likely designed by Jack West, of the Sarasota School of Architecture. Otherwise known as Sarasota Modern, the architectural style rose along the central west coast of Florida following World War II. Jack West was among the leaders of the movement and also designed the Sarasota City Hall. A circular “cyclorama” building is home to a 226-foot long mural by Don Putnam, a local Sarasota artist. The mural is accompanied by sculptural figures, and depicts Ponce de Leon’s Florida arrival in the 1500’s. It is thought that Warm Mineral Springs is in fact the Fountain of Youth that Ponce de Leon was searching for.

History: In the late 1950’s, the amateur archeologist and scuba diver William Royal found the remains of 7 individuals, as well as archeological finds in the sinkhole dating back 10,000 years. Of the human sculls found, one still contained organic brain matter. At the time, the remains were the oldest evidence of human occupation of Florida. Warm Mineral Springs was open as a small spa in the 1960’s, at which point recreational scuba divers removed most of the archeological evidence before proper scientific explorations and research could be carried out. It wasn’t until the 1970’s, that the owners restricted access to the site, having been encouraged to do so by an employee of theirs, Wilburn Cockrell, who was also a Florida State University archeologist. More archeological finds were discovered in the 1980’s, including early evidence of tool making. In total, the remains of at least 20 Paeloindian individuals were found at the site, as well as remains of Pleistocene era mammals such as the camelid, saber-toothed cat and giant ground sloth.

At the time the remains were deposited there, they would not yet have been underwater, since ocean levels were a good 90 feet shallower, most of their water still locked away as sheets of ice. The human remains were buried within the walls of the cave, above the water line. When first discovered, they upended the belief at the time, which was that humans arrived in Florida only as late as 7,000 years ago. Carbon dating now places some remains from this site at 12,000 years old.

In 1977, the Springs were added to the National Register of Historic Places, having likely once been used as a burial grounds for prehistoric people living in Little Salt Springs. In 2010, Sarasota County and the City of North Port purchased the site for over $5 million with the intent to develop it for tourism. In 2012, after the development plans failed to pass, the springs were temporarily closed. Local residents and city commissioners were concerned that the site would become overdeveloped, and were unhappy with the grossly ambitious first round of proposals. While a new bidding process is underway, the springs reopened for swimming in 2014, and has since reopened for spa services.

Things to Do in Sarasota, Florida: Mote Marine Laboratory & Aquarium

Best Things to Do in in Sarasota, Florida: Marie Selby Botanical Gardens