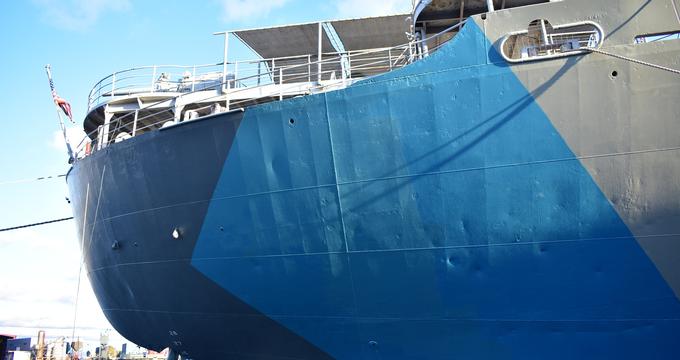 The SS American Victory in Tampa is a World War II ship that is one of four fully operational ships from the period. On board visitors will find a Mariner Museum complete with exhibits dedicated to American maritime history, rare artifacts, war memorabilia, and more throughout nine decks and many rooms.

The SS American Victory was built over the course of 55 days in 1945 as part of a call for 531 ships to be assembled for the war effort of World War II. The ship served in the Korean and Vietnam wars following World War II and was granted a restoration in 1985 that attuned to $2.5 million.

A decade later the SS American Victory was headed for the scrap yard when Captain John C. Timmel decided to acquire it and transport it from Virginia to Tampa Bay where it would serve as a maritime museum. The steamship is still fully functioning in 1940’s era glory. The ship arrived in Tampa Bay in the fall of 1999. After 80,000 hours of restoration time the SS American Victory could sail again on September 20, 2003 with nearly 500 passengers on board.

The SS American Victory is 455 long and 109 feet high weighing over 10 tons. There are 9 decks and a 2 Allis Chalmers marine steam turbine engine that is fully operational, with 500,000 cubic feet of cargo space on board.

The SS American Victory is open 7 days a week with hours posted online. They are closed on certain holidays. Tickets can be purchased on board with discounts for groups of 10 or more and museum members.

Tours- Visitors can relive history through self-guided or docent lead tours of the exhibits. A self guided tour comes with a visitor’s guide received at admission and is a go at your own pace adventure through the ship. Docent lead tours must be booked in advance and a lead by experience and expert docents.

The Ship Store- The ship store offers apparel, souvenirs, artworks, mugs, books, games, and more for visitors. Merchandise is only available in store.

Field Trips- Hour long educational programs are available for school and homeschool group field trips. Students will learn about the life of sailors during wartimes, merchant ship life, and hands on activities for their age level. Tour the cargo holds, radio rooms, wheel house, mess halls, lifeboats, engine rooms, and cabins in the Passage Back in Time Field Trip.

Visitors looking for a private rental option in the Tampa Bay area can rent the SS American Victory with use of both indoor and outdoor spaces for wedding receptions, corporate events, birthday parties, banquets, and other affairs. There are catering options that the SS American Victory staff have as preferred vendors as well as bar service, DJ and Specialty lighting services available through preferred vendors.

Membership has a lot of perks such as discounts on admission to the Florida Aquarium, Henry B. Plant Museum, MOSI during certain months, Armed Forces History Museum, and a discount in the Ship Store with free admission to the SS American Victory. There are also discounts and newsletters that you can receive with membership with all perks subject to change at any time.

There are memberships for students, teachers, individuals, and families. Some of the family membership plans include guest passes, free tickets to special events, and a free behind the scenes tour for the tour tier level of membership.

American Victory Ship is always looking for volunteers in administration, marketing, public events, and educational programs. Maintenance and restoration crew members with valid USCG are always needed as well with volunteers receiving discounts in the store, a free t-shirt and appreciation parties. More information on how to be a volunteer can be found on the SS American Victory website along with a downloadable volunteer packet.

More Things to do in Tampa