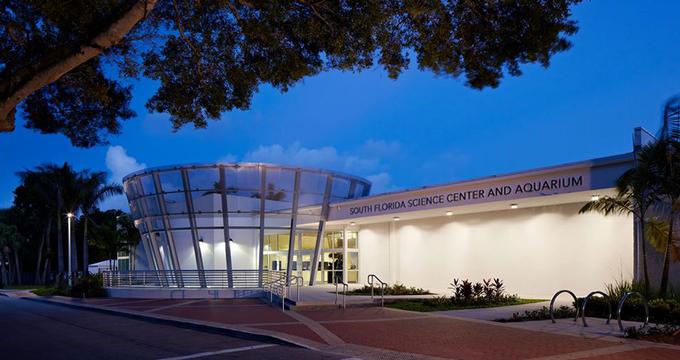 With a mission to “Open every mind to science”, the South Florida Science Center and Aquarium in West Palm Beach, Florida accomplishes just that, with a focus on science of the natural world. Attracting over 200,000 visitors per year, including tens of thousands of public and private school children, the Center provides an interactive learning environment for all who visit.

Just a few miles from downtown Palm Beach and all the fun of beach life, the convenient location makes it easy to incorporate science into any vacation or leisure day. As educational as the exhibits are exciting, the Center offers an aquarium, planetarium, observatory and temporary exhibits to pique the mind and imagination. 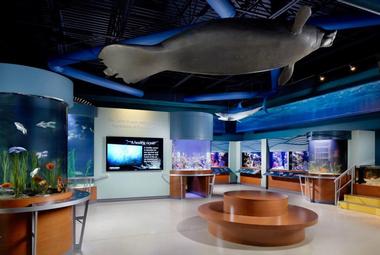 The South Florida Science Center and Aquarium has a vibrant past, full of growth, expansion and service to the community. Since its 1959 founding by the Junior League of the Palm Beaches, the Center has served more than five million visitors. Originally known as the South Florida Science Museum, doors opened in 1961, offering exhibits focusing on nature and natural history. The Museum grew rapidly, opening a planetarium in 1964 dedicated by and named for astronaut Buzz Aldrin.

From there, growth continued, doubling in size by 1971. The Center’s evolution continued through the 1980s, with a substantial renovation of the theater and planetarium. 2012 saw more renovation, after $6 million in funds were raised for the construction of a 6,000 square foot aquarium space, which includes Aquariums of the Atlantic and River of Grass, the Center’s Everglade Exhibit. This interactive space also includes a NOAA Science on a Sphere exhibit and a student showcase for local science fair projects from the Palm Beach School District.

The name was changed at this time to incorporate the new features, becoming the South Florida Science Center and Aquarium. With a subsequent renovation of Discovery Hall, the continuously improving and evolving Center now provides an upgraded theater and new science laboratory which cultivate interest in the sciences.

The Aquarium at the South Florida Science Center is comprised of two main areas. Half the space is dedicated to the Aquariums of the Atlantic gallery and the other half to the River of Grass Everglades Exhibit, which is dedicated to exploration of these special ecosystems in Florida. The exceptional exhibits on display include specific highlights from the Atlantic, including native Florida sea life such as eels, sharks, stingrays, seahorses and Queen Angels.

Visitors will want to be sure to explore the Coral Reef Tank, with its unusual layout that allows guests to feel as though they surrounded by fish, swimming right along with them. The Shipwreck Cove exhibit focuses in on predators of the Atlantic Waters, darting in and out from a simulated shipwreck. Other highlights of the Aquarium include tanks devoted to Venomous Beauties, Hidden Creatures, Seahorse Corral and Jewels of the Sea.

The Touch Tank allows visitors to get up close and interact with undersea specimens. In addition to exploring the tanks, visitors can enhance their visit through live aquarium feedings, alligator pettings, touch tank demonstrations or the shark tooth lab. Times and days vary for these interactive events, so it is recommended to review the website prior to visiting the aquarium to optimize the visit. 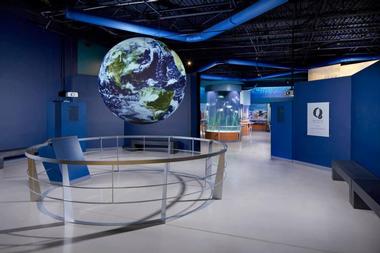 Featuring the only digital planetarium in Palm Beach County, the South Florida Science Center and Aquarium offers visitors a variety of shows in an immersive setting. The Planetarium currently offers eight different films ranging from 20 to 40 minutes each. Solar System Odyssey take viewers on an adventure through the solar system and is recommended for audiences over the age of ten.

Astronaut, narrated by Ewan McGregor, takes the viewer through a journey to inner and outer space, told from the perspective of the astronaut, including the experience of a rocket launch from inside the astronaut’s body. The award winning Back to the Moon for Good follows the stories of the Google Lunar XPRIZE, in which teams compete to land a robotic spacecraft on the moon. The competition, designed to invigorate interest in space exploration, makes for an intriguing story told at the Planetarium.

Cosmic Collisions explores the explosive results of celestial encounters, from the end of the dinosaurs to human life on Earth. Bringing the aquarium into the planetarium, Sea Monsters – a Prehistoric Adventure is a National Geographic production drawing together paleontological digs to explore the ancient ocean world. Other films on view include Night Skies over Palm Beach and One World, One Sky: Big Bird’s Adventure,a movie for the younger science enthusiasts in the crowd.Infinity Express is a journey of discovery mapping the universe, narrated by Laurence Fishburne. Planetarium shows are not included with admission; guests are advised to review the Center’s website for show times and ticket prices.

While the Planetarium offers visitors the chance to view the cosmos in an enveloping and immersive digital dome screen, the Observatory provides eager scientists the opportunity to view the celestial bodies themselves. At Nights at the Museum, amateur astronomers can explore the night sky through the Center’s massive telescope. The upgraded equipment used by the Observatory enables visitors to see celestial objects not otherwise available to the naked eye. The Meade LX600 telescope includes a computer and GPS which scans the stars; mounted on top is a Coronado Solar Scope, allowing viewers to look directly at the sun without need for additional specialty glasses.

In addition to the aforementioned permanent exhibits, the South Florida Science Center and Aquarium also features interactive temporary exhibits. These changing exhibitions keep the Center growing and evolving, enabling guests to experience something new with every visit. Recent exhibits include Grossology: The (Impolite) Science of the Human Body, which featured a huge “Tour du Nose” to explore the nasal cavity and its features, and the hilarious “Burp Machine”, which mimics the build of up gases to release a huge belch. Other past exhibitions have included Eww! What’s Eating You? and an interactive Mobile Learning Adventure. 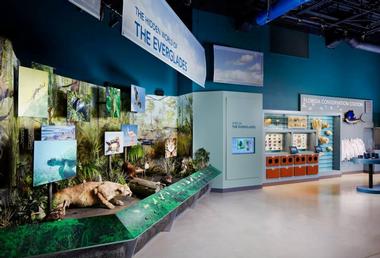 In addition to the permanent and temporary exhibits, the Center also offers a variety of events and programs to enhance visitors’ experiences. Nights at the Museum, offered monthly, allows participants to explore the Center after hours. These themed events include crafts, activities, entertainment, shows and night sky viewing. The GEMS Club, Girls Excelling in Math and Science, is another monthly activity which encourages exploration and discovery in the world of math and science for girls in grades three through eight. Food and refreshments are provided at these themed evenings.

The Center not only provides these ongoing series, but also hosts a variety of limited time event offerings. These include the Science on Tap Series, held at a local brew house, during which attendees listen to the latest trends in science from a world-class scientist, while enjoying their favorite beverage. Other events, such as the Science of Chocolate 2016, or Nine and Wine, a nine-hole golf event, complete with refreshments and prizes are also hosted throughout the year. Ticket sales benefit the Center’s conservation efforts. Family events include Tech Sleepovers, offered periodically, or the Young Maker Workshops, a week of workshops inspiring attendees to build, create and innovate at the Science Center. The calendar of events on the Center’s website provides scheduling and date information for all of these events and programs, as well as links to details and ticket prices.

A primary focus of the South Florida Science Center and Aquarium, education takes shape in many forms and offerings. These include programs, events, and even online resources through its “Anytime, Anywhere Science” program. Through these offerings, the Center reaches 75,000 students each year, delivering its missionto open every mind to science. Programs include parent and child classes, homeschool programs, science camps, science sleep overs and the Hack Shack Tech Club, a special club for fifth through eighth graders to explore the science of computer programming and technology. The newest educational offering, the FIRST LEGO League, give kids the opportunity to build their very own Lego robots, and compete in robot task competitions. The Center has sent teams the last two years, earning awards and recognition in the competition. 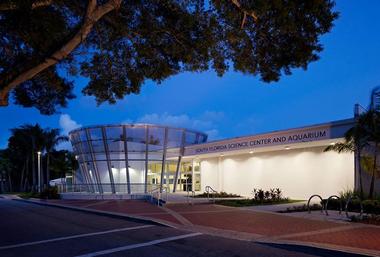 The South Florida Science Center and Aquarium is open daily. As times vary, guests are advised to visit the website prior to arrival, where they can also find special discounts, deals, and passes. The Center is easily accessible from several freeways, with parking available onsite. While at the Center, visitors can also visit the Science Center Store, with items such as toys, science kits, and even astronaut ice cream.

The WT Café provides nutritious offerings, including freshly made, kid-friendly foods that encourage healthy eating. The Café Mission, to make fresh nutritious and exciting food for every child everywhere, is also being delivered in several schools throughout Palm Beach County. Providing astronomical adventures to amazing aquarium explorations, the South Florida Science Center and Museum is a fun and family-friendly activity.

Back to: 22 Best Things to Do in West Palm Beach, Florida


Things to Do in in West Palm Beach, FL: South Florida Science Center and Aquarium