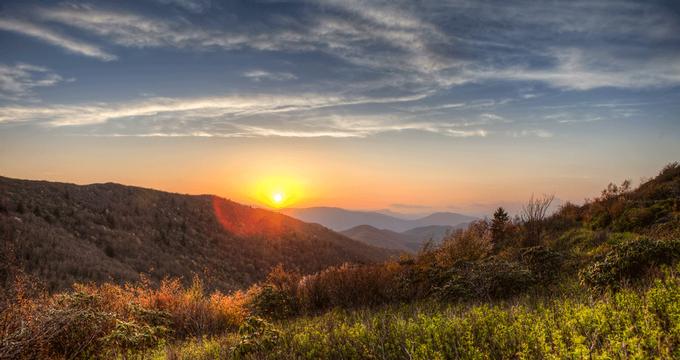 Great Smoky Mountains National Park not only preserves a tapestry of southern Appalachian culture and history, but is also the most biodiverse park in the entire National Park system. The park encompasses more than 800 square miles throughout the southern Appalachian Mountains. There is no other area of that size in a temperate climate that can equal its diversity. Great Smoky Mountains National Park contains more than 19,000 species that have been documented, and it is believed that another 80,000 to 100,000 species possibly live within the park.

In addition to the diverse plants and animals, the park also protects several historic structures, artifacts, and landscapes that illustrate the stories of the different people who once lived in the mountains. The Appalachian Mountains have long history with humans, from the prehistoric Paleo-Indians to Europeans settling the area in the 1800's to enrollees in the Civilian Conservation Corps enrollees and loggers in the 20th century. 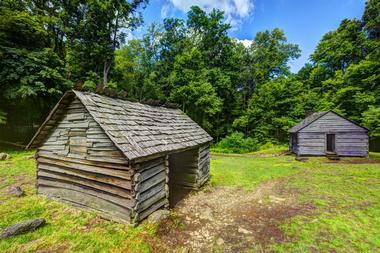 One of among the best collections in the eastern United States of log homes can be found at Great Smoky Mountains National Park. There are more than 90 historic buildings preserved or rehabilitated throughout the park, such as houses, churches, schools, grist mills, and barns. A few of the best locations in the park to see these structures are Cataloochee, along the Roaring Fork Motor Nature Trail, Cade's Cove, and Oconaluftee. Self-guiding tour booklets are available at each site to enhance the experience.

The Great Smoky Mountains National Park, spanning more than 800 square miles, is one of the eastern United States' most pristine natural areas. A park auto tour provides an array of experiences, such as timeworn historic buildings, panoramic views, hardwood forests stretching all the way to the horizon, and cascading mountain streams throughout the 384 miles of roads to choose from within the Smoky Mountains. There are booklets available that serve as a personal tour guide for visitors along the park roads. These booklets are keyed to numbered posts and landmarks throughout the park, and include information on the park's wildlife, plants, and history. Booklets are available for Cataloochee Valley, Cades Cove Loop Road, Roaring Fork Motor Nature Trail, Upper Tremont Road, and Newfound Gap Road. Self-guiding tour booklets can be found online, as well as at dispensers at the start of the roads they cover and visitor centers in the park.

There are around 9,200 miles of streams throughout the Great Smoky Mountains National Park, offering plenty of opportunities for fishing. The park protects one of the last wild trout habitats in the eastern United States. The wide array of fishing experiences range from secluded, headwater trout streams to large, coolwater smallmouth bass streams. Most of the streams throughout the park remain at or near their carrying capacity of fish, and provide a good opportunity to catch these species throughout the entire year. 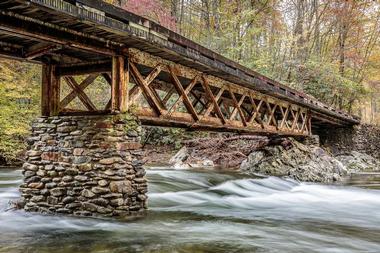 Hikers can enjoy the Great Smoky Mountains National Park throughout the entire year, with each season offering its own unique experiences. The Spring season offers a weekly parade of flowering trees and colorful wildflowers. Hikers can find cool retreats in the fir and spruce forests and balds during summer, or follow mountain streams to cascades and roaring waterfalls. Fall provides crisp, dry air to sharpen hikers' senses as they enjoy fall's varied palette of colors. The absence of deciduous leaves in winter opens new vistas for hikers, and reveals stone walls, foundations, chimneys, and other reminders of people who once lived in the mountains.

A few of the most popular hikes in the park are Alum Cave Bluffs, Rainbow Falls, Chimney Tops, Charlies Bunion, and Andrews Bald. One of the most difficult tasks for hikers is choosing a trail. Start by choosing what you want to see, and decide the distance you would like to hike. For people who haven't hiked very much recently, it's best to be conservative. Five miles round-trip is good maximum distance for those without much hiking experience. 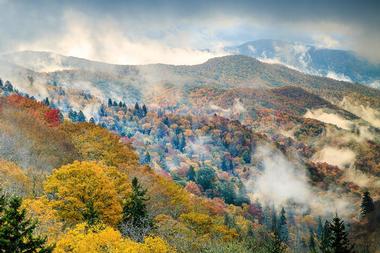 The Great Smoky Mountains National Park has several large waterfalls, but there are also smaller waterfalls and cascades on almost every river and stream in the park. More than 200,000 visitors hike the well-worn park trails each year to see the popular waterfalls in the park, such as the Grotto, Rainbow, Abrams, and Laurel waterfalls among others.

Grotto Falls, at 25 feet in height, can be found along the Trillium Gap Trail that winds through an old-growth hemlock forest. The trail actually goes behind the waterfall. The 80 feet high Rainbow Falls produces a rainbow from its mist on sunny afternoons. Abrams Falls may only be 20 feet high, but the huge volume of rushing, cascading water makes up for its lack of height. Laurel Falls is a popular, 80 feet high, picturesque waterfall.

There are also several other waterfalls found throughout the park, including Hen Wallow Falls, Juney Whank Falls, Ramsey Cascades, and Indian Creek and Thomas Branch Falls. Hen Wallow Falls is 90 feet high and found among a hemlock and rhododendron forest. Juney Whank Falls is separated into lower and upper sections, which together create a 90 feet high waterfall. Ramsey Cascades drops 100 feet over rock outcroppings and is the park's tallest waterfall. The Indian Creek and Thomas Branch Falls can be found along an easy hike in the Deep Creek area. Visitors can also drive to Meigs Falls, Place of a Thousand Drips, and The Sinks. Salamanders can often be found close to the base of several waterfalls.

Visitors can bicycle on most of the roads within the Great Smoky Mountains National Park, but many of the park roads are not well suited for safe and enjoyable bicycling due to steep terrain, heavy automobile traffic, and narrow road surfaces. The Cades Cove Loop Road is an exception to these roads. The 11 mile, one-way road is a popular bicycling area among visitors to the park. The road offers great opportunities for touring 19th century homesites and wildlife viewing. A few other areas suitable for bicycling are the roads in the Tremont and Greenbrier areas in Tennessee, and Lakeview Drive and the Cataloochee Valley in North Carolina. Bicycles can be rented at the campground stored during summer and fall. There are no mountain biking trails within the Great Smoky Mountains National Park. Only a few trails in the park allow bicycles: The Oconaluftee River Trail, the lower Deep Creek Trail, and the Gatlinburg Trail. 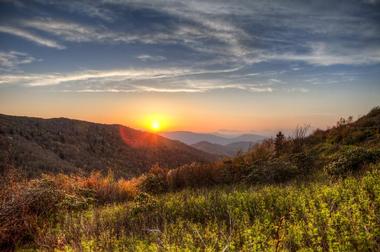 As a world-renowned preserve of wildflower diversity, the Great Smoky Mountains National Park contains more than 1,500 different kinds of flowering plants, more than any other national park in North America. The park is also known as the "Wildflower National Park," with flowers in bloom throughout the entire year. The year begins with ephemerals in the spring. These plants get their name from the fact that they appear above ground only in late winter and early spring. They flower, fruit, and die back within about 2 months. The ephemerals emerge February to April, and are gone by May or June. These plants include lady slipper orchids, fire pink, crested dwarf iris, columbine, phacelia, bleeding heart, jack-in-the-pulpit, violets, and 10 different species of trillium among many others.

Shrubs and trees bloom year-round, with brilliant red flowers of red maples appearing from February to April. Showy trees, like silverbell, serviceberry, flowering dogwood, Fraser magnolia, tuliptree, and red bud follow shortly after. Sourwood, a tree prized for the honey produced by bees from its small, bell-shape white flowers, starts to bloom in late summer. Late fall and winter offer the yellow flowers of witch-hazel, blooming from October to January. Small, bright yellow flowers of spicebush start to bloom in February and are soon joined by dog hobble, flame azalea, and sweetshrub.

-- You are reading "Places to Visit in North Carolina: Great Smoky Mountains National Park this Weekend with Friends" Back to Top

You are reading "Places to Visit in North Carolina: Great Smoky Mountains National Park " Back to Top

25 Best Things to Do in Casablanca, Morocco

Where to Go Now