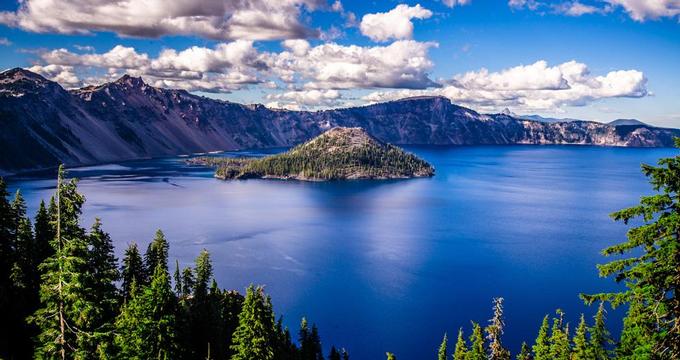 Crater Lake was created 7,700 years ago after a violent eruptions caused a towering volcano to collapse. Scientists are in awe of its purity and the lake possibly the most pristine on the planet, fed by rain and snow. Sightseers, photographers, and artists often stand in wonder at the stunning setting with the lake's blue water.

When comparing average depth, however, Crater Lake is the third deepest in the world and the deepest in the Western Hemisphere with an average depth of 1,148 feet. This volcanic lake's incredible average depth is due to almost symmetrical caldera that's 4,000 feet deep, as well as the somewhat moist climate. The rim of the caldera varies in elevation from 7,000 feet to 8,000 feet.

Crater Lake National Park spans 183,224 acres. All of the water that fills Crater Lake is ultimately lost from subsurface seepage or evaporation, and is replaced completely from direct rain and snow The water of the lake is usually a beautiful blue hue.

These walks last for about two hours and cover one to two miles of moderately strenuous terrain. The walks are more an off-trail exploration, not following any trail as they go through meadows and forests along the edge of Crater Lake. Tours and snowshoes are free of charge and no previous experience with snowshoeing is needed. Visitors wanting to participate in a snowshoe walk should come dressed in warm clothing and water-resistant shoes. 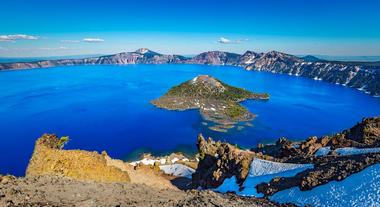 Volcanic activity in the Crater Lake National Park area is caused by subduction off of Oregon's coast. The resulting Compression and heat generated has led to the creation of the Cascade Range, a chain of mountains capped by a string of volcanoes. The range's large volcanoes are known as the High Cascades. There are several other smaller volcanoes in addition to these larger ones.

Mount Mazama came into existence nearly 400,000 years ago as an overlapping shield volcano, in a similar way as the other volcanoes that make up the High Cascades. Interspersing layers of Pyroclastic flows and lava flows created Mazama's overlaying cones over time until the volcano reached a height of around 11,000 feet. As the stratovolcano grew, several volcanic vents and smaller volcanoes were created within what is now Crater Lake National Park, as well as just outside the park's perimeter. Cinder cones were chief among these volcanoes. These early cinder cones are now gone, however, thirteen or so younger cinder cones can be found within the park, and about eleven at least outside of its borders.

Mazama became dormant for some time, but became active again. Around 5,700 BC, the volcano collapsed into itself during a massive volcanic eruption, losing 2,500 feet to 3,500 feet in height. A massive caldera was created from the eruption. The result was the beautiful blue lake now called Crater Lake. 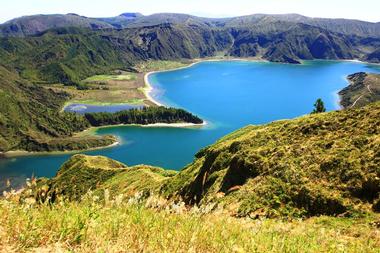 The Pinnacles in Crater Lake National Park are tall pinnacles and spires created by extremely hot pumice and ash that came to rest near Mount Mazama. 200 to 300 foot thick gas-charged deposits were formed when this happened. For years later, hot gas moved up to the ground's surface and gradually cemented pumice and ash together in paths and escaped through holes in the volcano, or fumaroles. Later, erosion removed the majority of the surrounding laxed pumice and ash.

The park's Pumice Desert is almost empty of plants due to poor soil and excessive porosity, meaning water drains through quickly. The desert is remarkably thick layer of ash and pumice leading in a northern direction away from Mount Mazama. As a contrast, old-growth forests cover about 50,000 acres of the park.

Another volcano within Crater Lake National Park is Mount Scott, a steep andesite cone. The lava in Mount Scott came from the magma chamber of Mount Mazama, making the volcano what geologists call a satellite or parasitic cone. Eruptions stopped on Mount Scott at some point before the Pleistocene's end. The extinct Union Peak volcano is located in the park's southwest corner, the remains of which includes an extensive volcanic plug.

The road most often used by visitors in Crater Lake National Park is Rim Drive. This road is a scenic route that follows along the rim of the caldera. On the caldera's northern side is Llao Rock, rising 1,800 feet above Crater Lake. There is a 1.3 mile trail that leads to the summit from Rim Drive. The 2,650 mile Pacific Crest Trail also cuts through the park. This equestrian and hiking trail stretches from the Canadian border to the Mexican border. 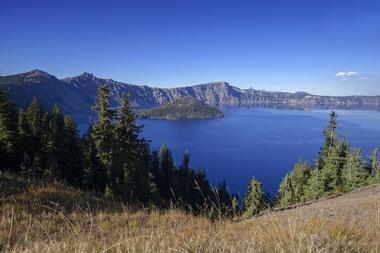 
There are many activities visitors can take part in while at Crater Lake National Park. Several campgrounds and hiking trails exist within the park's boundaries. Fishing without a license is permitted with no limitation on species, number, or size of fish. Rainbow trout and Kokanee salmon flourish and reproduce naturally in the park. Swimming is permitted in the lake. During the summer there are also daily boat tours available. The boat tours stop at a cinder cone in the lake, known as Wizard Island. The boats used for the tours were delivered by helicopter, as there is no roads leading to the waterfront. The lake can be reached by Cleetwood Trail.

Crater Lake National Park has numerous places where visitors can find spectacular views. Many observation points for Crater Lake can be found along the rim of the caldera on Rim Drive, which is thirty-three miles long. The highest point in the park is Mount Scott at 8,929 feet, and is reached by a steep 2.5 mile hike from the trailhead of Rim Drive. From the summit, it's possible to see at least 100 miles out on a clear day and take in the sight of the entire caldera. Visitors can also see the Klamath Mountains and the Western Cascades to the west, the Columbia River Plateau to the east, and the Cascade Range volcanoes to the north from this point. 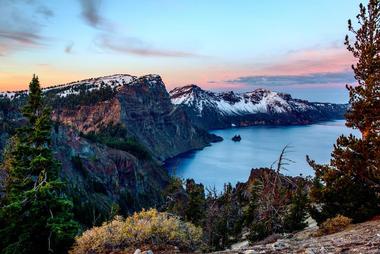 
Crater Lake National Park includes several hiking trails. The Cleetwood Cove trail, which is a little over a mile long, starts north of the lake and is the only trail that leads to the lake's shore. The trail descends 656 feet from the parking lot area of Cleetwood Cove with a 11% grade, making the return trip a more strenuous one. The trail isn't accessible for visitors who are mobility-impaired due to the steep grade.

Beginning from the parking lot of Watchman Overlook, the Watchman Peak trail is a 0.8 mile long uphill trail. The trail is on the caldera's western rim on an isolated mountain. Several switchbacks provide broad views of Wizard Island and Crater Lake. From the summit, hikers are able to see many landmarks, including Mount Scott, Union Peak, Klamath Basin, Mount Thielsen, and Mount McLoughlin. The Watchman Peak Trail ends near a fire lookout tower from 1932.

The Lightning Springs trail is three-fourths of a mile in length and begins at the picnic area with the same name. The trail is known for sights of grazing deer and circles several meadows on its way to the Lightning Spring creek. The easiest trail in the park is the trail that loops around the Castle Crescent Wildflower Garden. The garden bursts with wildflower during the spring. Starting from the East Rim Road, the trail stretches for only half a mile before reaching the meadow garden.

Back to: Best Places to Visit in Oregon