Things to Do in Connecticut: Florence Griswold Museum 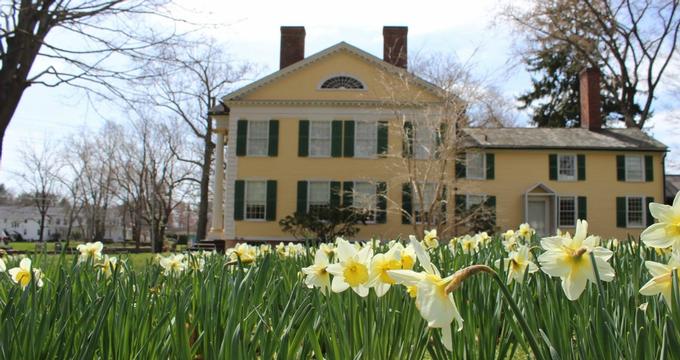 Located in an idyllic setting between the bustling cities of New York and Boston, the town of Old Lyme is home to the Florence Griswold Museum. Visitors to the museum are sure to be inspired by the sights and sounds of the historic district within which the museum is located. The same graceful gardens, rolling fields, and rocky shores that initially made this town a draw for artists seeking a refuge from turn of the century urban life can still be viewed by visitors today. This historic landmark aims to preserve and display both the historic structures and the art works that put Old Lyme on the map.

Built in 1817, the home that would find itself at the center of the American art scene was once just the humble abode of Florence Griswold. A long time teacher in a girls’ school, Florence found herself in financial hardship after the passing of several members of her family. To remedy her situation, she decided to take in boarders to help supplement her income. One of the first people to lodge in her home was Henry Ward Ranger, an American artist who had recently returned from a sojourn in Europe. Ranger, inspired by the beauty of the region and the hospitality of his hostess, encouraged many of his friends to join him. Over time, the School of Lyme was born. With a strong group identity, the Lyme artists created an entirely original painting style that was distinctly American in nature. Their creations form an important chapter in American art, identity, and culture.

The museum’s collection largely consists of paintings and sculptures that were made by the artists who lodged there. However, in 2002, the Hartford Steam Boiler Inspection and Insurance Company donated an additional 190 pieces, which now form part of the museum’s permanent holdings.

Built in 2002, the Krieble Gallery is a great place to begin one’s exploration of the Florence Griswold Museum. This space is designed to showcase the impressionist art of the museum’s permanent collection in the most natural light. With plenty of windows and skylights, visitors can appreciate the subtleties of the works on display. In addition, the Orientation Theatre, located in the gallery, shows an introductory film that helps contextualize the works displayed at the museum.

The Florence Griswold Museum has over 10 acres of gardens and grounds, which guests can explore during their visit. These scenic surroundings, which include who gardens and the picturesque Lieutenant River, are the very same that inspired the many artists that pioneered the Lyme school of art.

Occupying a unique place in American art history, the Florence Griswold House welcomed over 200 artists over the course of its career as a boarding house. This stately structure underwent a huge transformation as it went from being the home of a wealthy sea captain’s family to a retreat for turn of the century artistic luminaries. Its occupants left behind a visual legacy, which visitors can experience by touring each room of the home. Exploring this historic landmark can be a fun and rewarding experience and the museum also offers prizes for those who successfully complete its scavenger hunt challenge.

To get a better understanding of how the residents of Lyme utilized and interacted with the land in and around the museum, visitors can explore the Rafal Landscape Center. Located in a restored 19th century barn, the center offers reproductions of historic photographs and paintings, 19th century agricultural implements, and a silent film from the 1920s. Though the barn housing the Rafal Center underwent a recent restoration in 2009, its features have been curated to preserve as much of the original character of the space as possible. The result is a quaint relic that serves as a window to Connecticut’s long and storied past.

Those planning their visit to the museum between the months of April and October may include the Chadwick Studio in their itineraries. American artist William Chadwick worked in this studio from 1920 until his death in 1962. The Chadwick Studio arrived at the museum in 1992 after the artist’s daughter-in-law donated it to the institution. Prior to that, it was located on the artist’s property, about 3 miles away from the museum grounds. As Chadwick was an impressionist, he spent much of his time painting directly from nature. However, he used his studio for still life and figure painting.

Things to Do in Hartford: Museum of Connecticut History