Things to Do in Connecticut: Lake Compounce Park 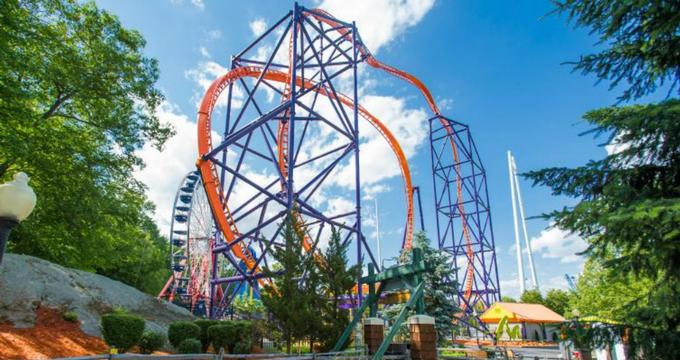 Lake Compounce Park is an amusement park situated in Bristol and Southington, Connecticut. With a history dating back to 1846, Lake Compounce is the oldest amusement park in continuous operation in the United States, although its original purpose as a picnic park as well as its land and ownership have changed significantly over the years. Since 2007, the park has been owned by Parques Reunidos. The park spans 332 acres and includes amusement rides, food and drink restaurants, carts and shops, gift shops, a theater, and amenities. Additionally, the park has a waterpark and beach, which are free to access for visitors to the park. Open seasonally, the park offers a number of admission passes, such as smart day tickets and season passes.

Lake Compounce has a wide variety of rides on its grounds. Categorized into roller coasters and thrill rides, classic rides, kiddie rides, and water rides, there are 44 rides in total. The roller coasters include the wooden roller coaster Boulder Dash, which reaches 60mph, the triple launch Phobia Phear Coaster, which rises 150 feet into the air, the Zoomerang with a 125-foot drop, the Wildcat, which has been open since 1927, and Thunder N’ Lightning, which zooms around 90 feet in the air with a force of 3 Gs. The thrill rides consist of the spinning seated ride Wipeout, the spinning cage ride Twister, the carousel-style Wave Swinger, and the 360-degree spinning Rev-O-Lution, which travels up a 5-story track. Other thrill rides are the Sky Coaster, where visitors are suspended in the air as if flying, the 185-foot vertical-drop Down Time, and the high swinging Pirate Ship.

The classic rides comprise one of the oldest carousels in America, known as the Antique Carousel, the Bumper Cars, the rotating American Spinners, an open-air trolley from 1911, the C.P Huntington Train, and the Giant Wheel. The kids’ rides consist of the 1950s-style car driving ride Zoomer's Gas n’ Go, the 30-minute open-air Sky Ride, the long flume Saw Mill Plunge, the rotating Rainbow Riders, the mini motorbike Little Dare Devils, and the mini version of the Bumper Cars known as Little Critters. Other kids’ rides are the Kiddie Coaster, the mini pirate ship Jolly Jester, Ghost Hunt with laser guns, the spinning Drum Circus, the Fantasy Carousel, the mini tower-drop Drop Zone, the Caterpillar Train, and the Dino Expedition.

The waterpark at Lake Compounce is the largest in the state and there are a variety water rides located here. These include the Lights Out high-speed slide, the tube riding Croc-O-Nile, the 300-gallon water bucket, the slides and canons of Clipper Cove, and the rafting Mammoth Falls. Additional water attractions are the large swimming area of Bayou Bay, the wave pool of Anchor Bay, and the large water slides of Tunnel Twisters and Riptide Racer. The Crocodile Cove area also features multiple water slides, wave pools, and a lake.

Another attraction at the park are the shows. Performed regularly, the shows take place at the Starlight Theater. The shows are offered as four performances, namely The Sparkplugs, a rhythm show, Step Right In, with live drumming and a dance performance, Crank Up the Cove with DJ Scratch Dat, featuring pool games, karaoke, and dancing, and finally Spin School with DJ Scratch Dat, where families can learn to DJ together.

Lake Compounce offers education days during certain months of the year. Educators are encouraged to take their classes to the park for educational field trips. The trips are open to children of all age groups. The topics are Triassic Park, discovering the ancient features of Lake Compounce Park, Physics Fun, where the group learns about how the rides work in relation to physics, and the Kids Class for kindergarten through 3rd grade, where they learn about mathematics and other subjects. Other topics are force and motion, which educate on the physics involved in the rides, and historic Discovery in the Park, which showcases the discoveries made in the grounds of the park.

Back to: Best Things to Do in Connecticut

Best Things to Do in CT: Taste of New Haven