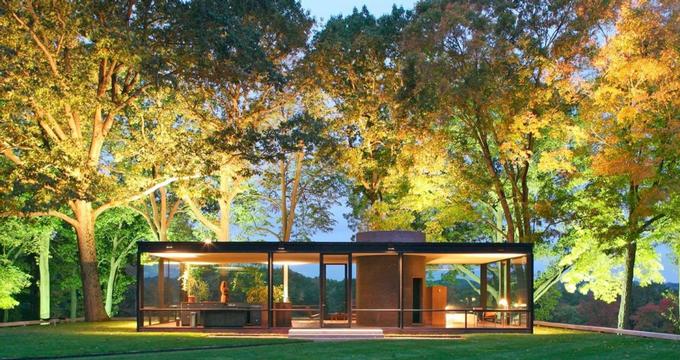 Located deep in the woods of New Canaan, Connecticut, the Glass House and surrounding structures offer visitors a getaway from NYC that is both tranquil and educational. Designed by Phillip Johnson, the space and the structures located within it showcase this legendary designer’s artistic point of view. The Glass House sits on a 49-acre parcel of land that was jointly acquired by Johnson and his lifelong friend David Whitney, a respected art collector and museum curator. Visitors to this site can see 14 structures peppered throughout the lush Connecticut greenery. Both the landscape and the structures within it can be seen as an exploration of the new, forward-thinking agenda of modernism as well as its continued reverence for the influential architectural styles that shaped it.

Built in 1949 as Phillip Johnson’s private residence, the Glass House is best understood as a pavilion for viewing and appreciating the landscape within which it was constructed. Johnson was an influential American architect known for his postmodern style and his residence, which he designed himself, is a tribute to his aesthetic. This structure is credited with introducing International Style to American residential homes. True to its name, the home features an open plan design and a notable absence of walls. This glass structure blends so seamlessly into the landscape that it is virtually invisible from afar.

Visitors to the Glass House can see original furnishings owned by its occupant and designer. In addition, his carefully selected artworks, which include Two Circus Women by Elie Nadelman and Nicolas Poussin’s Burial of Phocion, can also be viewed. The landscape and its natural features informed Johnson’s design, and visitors will doubtlessly appreciate that this exemplary structure allows one to simultaneously view the sunset and the moonrise from the same spot in the home. Those particularly well versed in modernism will also likely see the subtle influences of Malevich and Mies van der Rohe in Johnson’s design. More subtle still are the influences of the Romantic movement, English garden style, and the Parthenon. In combining these seemingly disparate design ideologies, Johnson’s Glass House is a statement about how history shaped our modern view of architecture.

Completed just a few months before the Glass House, the Brick House offers a perfect counter point to it. Johnson envisioned the two structures to be part of the same composition and they are connected through a grassy court to signal this. Juxtaposing the transparency of the Glass House, the Brick House has only a few skylights and circular orbs located at the rear of the building for windows. The orb-like windows are allusions to a 15th century Florentine structure called the Duomo, constructed by Filippo Brunelleschi.

Overlooking the Ghost House, the studio can be found by walking through a field of tall grass and wetlands. Built out of a need to have a workspace that is separate from the movement and vibrancy of nature, the studio is filled with bookcases that show Johnson’s artistic influences. Among the 1,400 volumes found here, visitors can see books on architecture from all corners of the world. Many visitors may be puzzled by the fact that the structure has no bathroom but includes a fireplace. The exclusion of windows also meant that Johnson’s work was primarily lit by way of the light entering from the skylight. Part sculpture, part functional space, Johnson’s design invites visitors to pose questions around the relationship between creativity and utility in design.

Inspired by Greek tombs, the design of the Painting Gallery was done in such a way as to not obscure the view from the Glass House. Visitors familiar with Johnson’s work will likely notice similarities between the Painting Gallery and the Geier House in Cincinnati, Ohio. The Painting Gallery is home to paintings by several notable modern artists, such as Julian Schnabel, Robert Rauschenberg, Andy Warhol, and Frank Stella, to name a few. Each room in the gallery is circular and equipped with rotating poster racks, which allows the museum to store a total of 42 works.

Of all the structures near the Glass House, none is as telling about Johnson’s reverence for German expressionism as the Da Monsta building. This building, which is designed to emulate a living thing, was largely inspired by the works of Hermann Finsterlin and, to a lesser degree, Frank Stella, Frank Gehry, and Peter Eisenman. Stretching the limits of architectural form, this captivating building is easily one of the most striking on the property.

More Day trips from NYC, Things to Do in Connecticut

Things to Do in Hartford, CT: Connecticut Science Center

14 Best Things to Do in Clinton, Connecticut