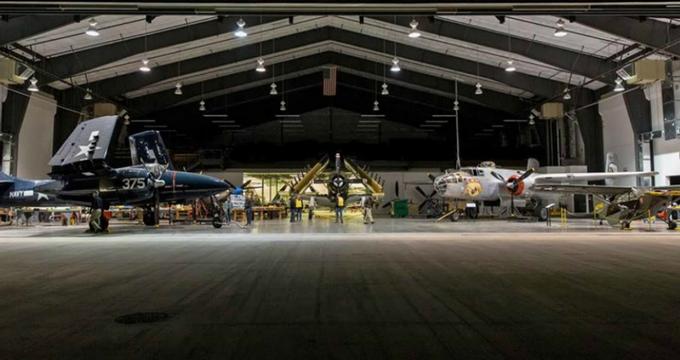 The museum’s campus is spread out over more than 20-acres near the Colorado Springs Municipal Airport and its interior displays are housed in a 44,000-square-foot facility. There is also a 65,000-square-foot restoration hanger, and currently, the museum is undergoing a huge expansion project which includes the addition of a 148,800-square-foot Aviation hall.

Currently, only about one-third of the museum’s vast collection can fit on site, but thanks to generous grants and donations from the community, the museum can expand and display all of its significant World War II memorabilia.

The museum boasts one of the largest collections of fully restored World War II aircraft in the nation. The goal of this collection is to tell the proud American story of influence and innovation of aviation in the second World War.

The aircraft is consistently rotated to provide new educational experiences to the museum’s returning visitors. The aircraft is generously loaned to the museum from personal collections from all around the United States. Currently, there are more than 40 different aircrafts on display at the museum, fighter jets, cargo aircraft and everything in between is on display.

Some of the exciting aircraft that is currently on display includes the Beech T-34 Mentor, the Howard DGA-15, the North American B-25 Mitchell, a Cessna A-37, and a Lockheed P-38 Lightning. Many of these are still in excellent flying condition!

There is also an extensive collection of more than 3,000 artifacts, historical documents, and rare objects in the museum’s permanent collection. These pieces are all representative of one of the most innovative and important times in American history.

These displays include historical photographs, pilot and flight equipment, plane replicas, plane engines, landing gear, and period clothing. Visitors can get up-close-and-personal with thousands of exciting pieces of history.

The museum also has quite a collection of restored and operational vehicles used by US troops during World War II. The functioning vehicles are on display outside and include a M2A1 Half-track, an M3A1 Scout Car, an Airfield Crash Truck, a M38A1 Jeep, a Clarktor 6 Tow Tractor, a CT-21 Tow Tractor, and two Tow Tractors from the Mobilift Company and American Coleman.

Currently under restoration is a M15 Combination Gun Motor Carriage from the White Motor Company.

Because the primary goal of the museum is fostering education, there are a variety of educational STEM programs available year-round for children of all ages.

Sky’s the limit is an introductory to aviation course for children enrolled in Kindergarten and 1st grade. The future pilots will engage in hands-on and interactive educational experiences that teach them the basics of science and math that make the magic of flight possible.

Keep ‘Em Rolling is an interactive course aimed at children in grades 2-3 which teaches students about flight and the innovation of people in the World War II era.

Salvage for Victory is a two-part course for children in grades 4-6 and aims to educate students about the rationing and recycling efforts that occurred during the war. Students will learn how to build airplane replicas and even conduct their own salvage drive to experience the time.

Keep ‘Em Flying is a course aimed at students in grades 6-8 and allows them to explore the more complex principles and forces of flight. They will learn how to design, build and test their very own aircraft utilizing the principles they have learned.

Wings Up is a course aimed at students in grades 9-12 and helps students investigate the STEM principles that were used in the aircraft design process of World War II.

There are also a variety of private and group guided tours for visitors to enjoy as well as a world-class gift shop and café.

Back to: Best Things to Do in Colorado Springs

Things to Do in Denver: History Colorado Center

19 Best Things To Do in Buena Vista, CO

17 Best Things to Do in Golden, Colorado