Things to Do in Colorado Springs, CO: Fine Arts Center 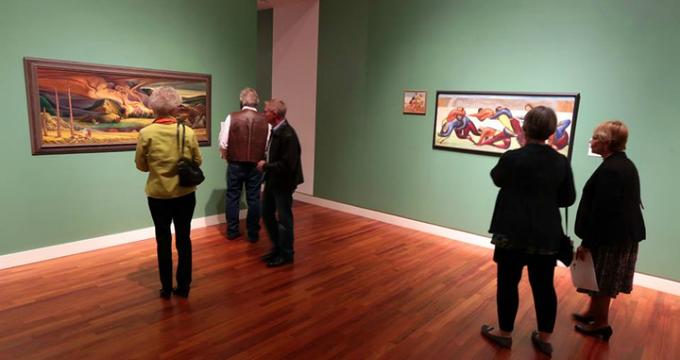 Located in Colorado Springs, Colorado, the Fine Arts Center of Colorado Springs aims to educated and inspire the community about visual and performing arts. Visitors will experience extraordinary cultural and historical performances and exhibitions that are sure to delight.

The Fine Arts Center of Colorado’s history began way back in 1919 when the founder of Colorado Springs, General Willian Jackson Palmer, was successful in his attempt to turn his town into a cultural oasis. The town earned the name “Little London” because of its established refinement and cultural influence in such untamed and rugged surroundings. Artists from all around the world flocked to Colorado Springs to get a taste of the budding fine arts town.

In 1920, the Broadmoor Art Academy was founded and quickly gained a reputation as the “cultural heart of Colorado”. It was renowned for having fabulous exhibitions and knowledgeable instructors, including Boardman Robinson, Willard Nash, and Kenneth Adams.

In 1929, the Broadmoor Art Academy began expanding into a multi-disciplinary art district, thus, the idea for the Fine Arts Center was born. The Fine Arts Center of Colorado Springs was built in the year 1936 and has developed into one of the nation’s only arts institutions that features a theatre, a museum, and an art school all in one building.

The current 2016-2017 theatre season features a wonderful variety of performances, including the following:

Veronika String Quartet: One of the best string quartets in the state of Colorado will be performing at the Fine Arts Center at 2 p.m. on July 2, 2017.

Happy Hour Stand-Up: On July 7 and August 4 at 6 p.m., the Fine Arts Center will host an evening of comedy complete with a cocktail hour beforehand.

Merrily We Roll Along: This thrilling Broadway musical featuring the music of Stephen Sondeheim is sure to delight attendees. The young and talented stars portray characters who struggle with compromise, friendship, and learn how to stay true to themselves. The show will run from July 27 – July 30.

The upcoming 2017-2018 season features some very exciting performances including:

Floyd Tunson and Dareece Walker: This exhibition aims to foster a dialogue surrounding the issues of social justice, specifically the tragic violent crimes perpetrated on racial minorities in the last few years. The artwork on display represent many issues including racially motivated conflict and profiling, mortality, and oppressive legislation. This exhibition is on display until September 9, 2017.

The Art of Storytelling: This exhibition features pieces from the Fine Arts Center’s collection of Spanish Colonial and Native American artwork. These pieces aim to tell stories from these cultures history, culture, and beliefs. This exhibition is only display until December 31, 2017.

The Fine Arts Center prides itself on offering a large variety of courses for artists of any age and any skill level. The facility offers classes year-round with qualified and supportive instructors for anyone interested in painting, drawing, pottery, photography, or filmography. For more information on the classes offered and how to sign up, visit the Art School’s web catalog.

Back to: Best Things to Do in Colorado Springs, CO

Things to Do in Denver: History Colorado Center