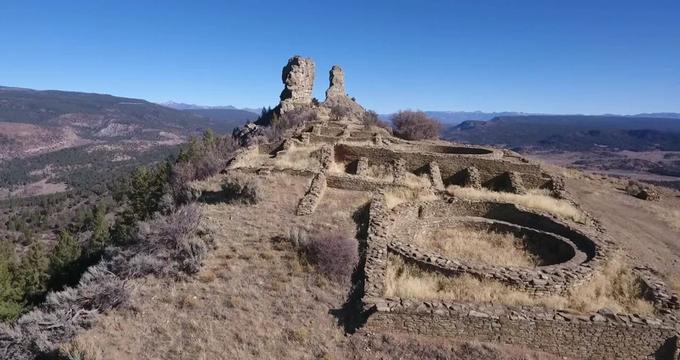 Chimney Rock itself is a 1,000-acre hill with a chimney-shaped rock structure on the top, closely matched by its neighbor, Companion Rock, with a similar formation at its peak. Companion Rock is a popular location for nesting Peregrine falcons. During the 18.6 year lunar cycle, the moon appears to pause between the two rock formations for a period of 16 months, in what is called a lunar standstill. Evidence suggests this site was built during a lunar standstill, and expanded 18 years later during the same lunar event. The Chaco culture is known for incorporating its astrological and mathematical knowledge in building.

The area’s four excavated Ancestral Pueblan sites lie on a ridge below Chimney Rock. Because the protected archeological sites are quite fragile, they are open to visitors between May and September only. Along the Kiva Trail, visitors can see two of the site’s excavated structures, the pit house, and the 44-foot diameter Great Kiva. The Kiva is a walled-off circular outdoor room used for ceremonies and political meetings. The combination of Chaco oral history and the archeological find of a grizzly bear jaw has suggested that the Bear Clan originated at this site, which housed close to 2,000 Ancestral Pueblans between approximately 900 and 1100 AD.

The Pueblo Trail can be accessed on a guided tour only. Walking tours take visitors along the trail to a Chacoan-style Great House Pueblo at an elevation of 7,600 feet, and an excavated multi-family dwelling. The Great House Pueblo includes 36 ground floor rooms and several smaller, ceremonial rooms or Kivas. The construction of the Great House at the highest point of the ridge reflects the culture’s hierarchical nature. The priest class would have lived above the others. Those who make the climb to the top of what is the highest of all Chacoan sites can enjoy expansive, 360-degree views of Colorado and New Mexico.

History: The Chacoan culture spanned the area represented today by America’s Four Corners, Utah, Arizona, New Mexico, and Colorado. This particular site was occupied between approximately 925 and 1125 AD. When the inhabitants of Chimney Rock left the site for unknown reasons in 1125, they burned it down. Many of the tribe’s descendants still consider the site sacred and have asked that the U.S. government refrain from further excavation.

Archeologists began to uncover the ruins in the 1920’s, but their limited knowledge on how to stabilize the rock walls, and their decision to burn the ancient wood they found for campfires, did more harm than good, leaving very little of the site for archeologists to work with today. Pottery that was found at the site was removed and can be seen today at Durango Colorado’s Anasazi Center. Additional artifacts have been removed and are in storage at different museums throughout the area.

The Chimney Rock Archeological site is on the National Register of Historic Places. Interpretative programming at the site is managed by the non-profit organization, the Chimney Rock Interpretative Association (CRIA). CRIA works in partnership with the San Juan National Forest and the USDA National Forest to recruit volunteers and run programming at the location within the National Forest. The CRIA is in the process of fundraising for a museum built at the site, so artifacts found there can be returned to their home.

Ongoing Programs and Education: Two different guided tour options include a 1-hour or 2-hour Guided Walking Tour. The full 2-hour walking tour takes guests on a 1-mile hike over an elevation of 200 feet to the Kiva Trail, Puebla Trail and all four of the excavated ancient structures. The 1-hour tour takes guests along the Pueblo Trail only to the site of the Great House Pueblo. A Kiva Audio Guided tour provides narrative and history on the Great Kiva and the pit house.

Special events include a lecture series, a full moon tour along the Kiva Trail, night sky programs for stargazing, and Stories at Sunset, led by Native American storytellers. The CRIA organizes a Junior Archeologist Program and also hosts school groups free of charge.

More Things to Do in Durango