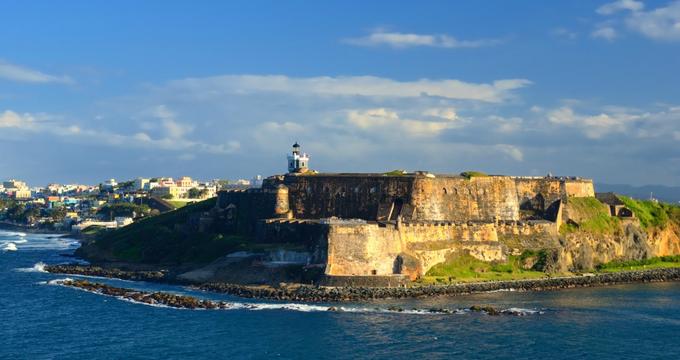 Construction of defenses for the settlement was ordered by Spanish King Charles V in 1539 in order to protect the city’s harbor. A proto-fortress was initially constructed at the area to defend the settlement while the full design of Juan Bautista Antonelli and Juan de Tejada, based on existing military fortifications in Spain, was completed and erected. The fortress was named Castillo San Felipe del Morro, honoring Spain’s King Philip II. Throughout the 16th and 17th centuries, the fortress successfully withstood a number of attacks from British and French forces, including a 1595 attack by Sir Francis Drake and a Dutch attack by Captain Balduino Enrico which destroyed much of the city of San Juan. In 1630, construction began on a complete wall around the city of San Juan, which was completed in 1678.

Beginning in 1765, Field Marshal Alejandro O’Reilly and engineer Colonel Tomas O’Daly embarked on a campaign to transform the city’s fortress following the 1762 siege of Havana by British forces. Significant modifications were added to the El Morro complex and the 27-acre Castillo San Cristóbal was constructed, which was finished in 1783. At its peak, the fortress sealed entry to the city with a set of double gates and contained more than 450 cannons. In 1797, the fortress successfully defended the city from a legion of 13,000 British soldiers led by General Ralph Abercromby and Admiral Henry Harvey.

Following the end of the Spanish-American War and the signing of the Treaty of Paris, the fortress was used by the United States as a military installation during World War I and II. In 1961, care of the fortress was transferred to the National Park Service following the establishment of the San Juan National Historic Site. The site was declared a UNESCO World Heritage Site in 1983, and throughout the 1990s, significant restorations to the fortress returned the structures to their 18th-century appearance in honor of the quincentennial celebration of Christopher Columbus’ discovery of the Americas.

Today, the remains of Castillo San Felipe del Morro and Castillo San Cristóbal are operated as part of San Juan National Historic Site, which also preserves the former Fortín San Juan de la Cruz facility and remains of the city’s wall fortifications. As one of the island’s leading tourist destinations, the site attracts more than two million annual visitors. The fortress encompasses more than 70 acres within San Juan, featuring six levels that range in elevation from sea level to 145 feet above water. Dome-covered garita sentry boxes can be seen along the city wall fortifications, including the 1634 La Garita del Diablo vantage point, one of the oldest extant portions of the fort, which has become a cultural landmark in Puerto Rican culture. The site also preserves the open glacis killing grounds and cannon esplanade, along with a lighthouse replica reconstructed in 1908 to replace the former 1943 Lighthouse of the Castillo San Felipe del Morro, which was destroyed in 1898.

Visitors may explore the site’s Paseo del Morro Trail, which was designated as a National Recreation Trail in 2001 and traces the remains of masonry walls dating back to 1630. Historical exhibits are also offered at the park’s San Cristobal’s Visitor Center and within both fortress remain areas, and a 20-minute orientation film is shown periodically throughout the day, detailing the history of Spanish occupation of Puerto Rico. A variety of ranger-led talks are also offered on weekends throughout the site’s peak season, including informational talks at the fortress’ main plaza, Tunnel Tours of the outer defenses of Castillo San Cristóbal, and an Outworks Walk exploring the fortress’ “Defense in Depth” system.

More than 20,000 students attend San Juan National Historic Site’s educational programming annually, including curriculum-incorporated field trip opportunities for elementary and secondary students. Guided and self-guided field trips are offered for student groups of up to 40 students, with guided tours lasting approximately one hour. The facility may also be rented for private special events, including weddings, film shoots, and photoshoots with the reservation of a special use permit. All organizations obtaining special use permits must submit an application and deposit, with the exception of groups using the facility for First Amendment-protected assemblies.