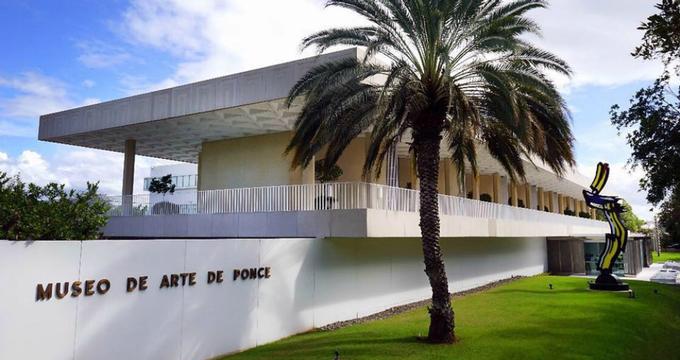 Located in Ponce, Puerto Rico, the Museo de Arte de Ponce is one of the largest and most comprehensive fine art museums in the Caribbean, showcasing a collection of works by European and Puerto Rican artists and offering public programming to foster creativity and exploration of the arts. Museo de Arte de Ponce was the vision of philanthropist Luis A. Ferré, who acquired a number of Pre-Raphealite works of fine art on a trip to Europe in 1956.

With the help of art consultants, Ferré continued to cultivate a collection of works based on their value for the purposes of creating an art museum in his hometown of Ponce. Three years later, in January of 1959, Ferré’s museum opened inside of a house in the city’s Centro Cultural de Ponce neighborhood, showcasing 72 works from his collection. Concerns for the safety of the collection within the original museum building prompted Ferré to begin a search for a new museum facility in the early 1960s, and in 1964, the museum began construction on a new permanent facility located on Avenida Las Americas, designed by architect Edward Durell. The new museum facility was opened to the public in December of 1965. From 2008 to 2010, the museum was closed for a $30 million renovation, which culminated in a grand reopening in November of 2010 in correlation with the museum’s 50th anniversary.

Today, the Museo de Arte de Ponce is the largest art museum in the Caribbean, housing a collection of more than 4,500 pieces of fine European and Puerto Rican artwork, with a focus on Pre-Raphealite works. The museum was the first in Puerto Rico to receive accreditation from the American Alliance of Museums, and the avenue on which it is located was renamed as the Luis A. Ferré Boulevard in its honor. As a major cultural center for the city of Ponce, the museum strives to present a comprehensive collection of Western art and to provide public programming to stimulate discovery, curiosity, and dialogue about art in the community.

14 galleries are contained within the museum’s 77,745-square-foot display space, housing a permanent collection that is considered to be one of the most significant collections of European art in the Western Hemisphere outside of the United States. More than 4,500 multidisciplinary works span from 900 BC through the present day, including paintings, ceramics, sculptures, photography, decorative arts, and multimedia installations. The museum’s collection follows Ferré’s vision of presenting works based on their objective quality rather than their fashionability within the art market.

European works in the museum’s collections represent the prominent art schools and movements of the 14th through 20th centuries, with a focus on the works of the British Pre-Raphaelite, Italian Baroque, and Spanish Golden Age. Notable works include Frederic Leighton’s Flaming June, acquired by Ferré for a sum of $2,700 from London’s Maas Gallery, and Sir Edward Burne-Jones’ The Last Sleep of Arthur in Avalon, which remains unfinished due to the author’s 1898 death. Other prominent artists featured include Peter Paul Rubens, Eugene Delacroix, and Lucas Cranach. Works by Puerto Rican and Latin American artists from the 18th century to the present day also comprise a large portion of the museum’s galleries, with historic artists such as Francisco Oller and José Campeche displayed alongside modern talents such as Francisco Rodón, Myrna Báez, and Arnaldo Roche Rabell. Historical collections of ancient African, European, and American pieces are also displayed, and temporary rotating exhibits showcase important works by historic and current artists such as Frida Kahlo. Roy Lichtenstein’s 1984 Pinceladas en Vuelo sculpture also adorns the museum’s main yard, considered to be the largest outdoor public art piece displayed in the Caribbean.

In addition to the museum’s exhibit space, a museum gift shop and restaurant are also provided for visitors. The museum’s Rosario Ferré Library is also available to visitors by appointment or during open public hours, offering a large collection of printed and electronic volumes, references, and audiovisual media. International interlibrary loans are available through the library, and a study room allows students to utilize internet collections.