Things to Do in Puerto Rico: Culebrita Island 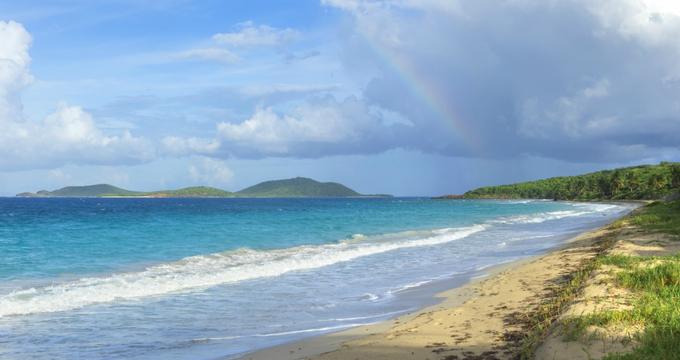 Located along the eastern coast of Culebra, Puerto Rico, Culebrita Island is an uninhabited island within the Puerto Rico Archipelago, accessible via private boat tours as part of the Culebra National Wildlife Refuge. The earliest-recorded history of Culebrita Island dates back to before the discovery of the Americas by European explorers, when the island was inhabited by the Taíno and Carib indigenous people.

In 1493, the island was discovered by Christopher Columbus on his second journey to the Americas, and throughout the Spanish occupation of the Caribbean, the Culebra area and its nearby islands served as a major harbor for pirate activity. In 1880, the area was first colonized by settlers from Puerto Rico and Vieques under the leadership of Cayetano Escudero Sanz, who established the San Ildefonso settlement and constructed the island’s Culebrita Lighthouse, which operated until 1975.

In 1903, after Puerto Rico became part of the United States, the Culebra Naval Reservation brought military activities to the area, and during World War II, the area was used as a bombing practice site. The Culebra area became an autonomous island municipality in 1917, with an independent democratic governing body elected in 1960. In 1909, the Culebra National Wildlife Refuge was established, encompassing parts of the main island of Culebra, along with the entirety of Culebrita Island, Cayo Luis Peña, and a number of the area’s other barrier islands.

Today, the Culebra National Wildlife Refuge encompasses approximately 1,480 acres across the 23 barrier islands of Culebra, as well as four distinct sections of the mainland. The refuge is noted as a major seabird and sea turtle habitat and tropical ecosystem preserve. The one-mile Culebrita Island is a y-shaped coral island divided into three branches, located along the Frailes of Culebra area of Culebra’s barrier islands. As an uninhabited wildlife preserve, the island is only accessible via private boat for day excursions.

More than 97 plant species are found within the island, according to the results of a 2006 environmental study conducted by Jonesville, Florida’s Southeastern Archaeological Research group. 38 animal species are also native to the island, including the endangered brown pelican, white-cheeked pintail, and green and hawksbill sea turtles. Passerine bird species, reptiles, and waterfowl are also common to the island and use it as a seasonal nesting habitat.

The island’s natural landscape is diverse, featuring a variety of beach, forest, lagoon, and cliff areas. Six beach areas are located on the island, including the Playa Tortuga area, also known as Turtle Beach, located on the island’s north side. Named for its large population of sea turtles, the beach features a white sand cove and offers snorkeling opportunities for visitors. Other notable beaches include Trash Beach and West Beach, which serves as a docking point for water taxis arriving from Culebra. Two shallow lagoons, Laguna de Molino and the Eastern Tidal Flat, are located on the island’s west side, and two rock formation tidal pools are part of the island’s eastern area, offering jacuzzi-like opportunities for swimming, lounging, and relaxation.

Closed for operations in 1975, the remains of the Culebrita Lighthouse are visible on the island today as the only remaining structure from the area’s era of Spanish occupation. The lighthouse was originally constructed between 1882 and 1886 and was the Caribbean’s easternmost lighthouse outside of Puerto Rico’s mainland, offering navigation along the Vieques Sound and Virgin Passage to the Cape San Juan Light. In 1981, the lighthouse’s remains were added to the National Register of Historic Places, and many of its original structures are still visible, including a green brass dome that was blown off the lighthouse’s top during a tropical storm.

A system of trails is offered throughout the island, connecting Playa Tortuga to other sites on the island, including the Culebrita Lighthouse. Views of other Caribbean islands are offered at the trail’s peak, including nearby St. Thomas and Cayo Norte. As the island is uninhabited and offers no businesses, all hikers are advised to bring food and water during their exploration. Visitors are also advised to check weather conditions prior to travel, as no safety personnel are staffed on the island. A variety of water taxi and day-sail services are offered on Culebra for day excursions to the island, including Gammy’s Water Tours and Taxi, Willy’s Water Taxi, Guilin’s Water Taxi, and Culebra Water Taxi, though overnight stays are not permitted. Island tour guides are also available for reservation through a number of travel service businesses, including the Culebra Getaway package through East Island Excursions. Amenities such as snorkeling gear and hiking shoes may be purchased or rented on Culebra prior to excursions.