Things to Do in Puerto Rico: Arecibo Observatory 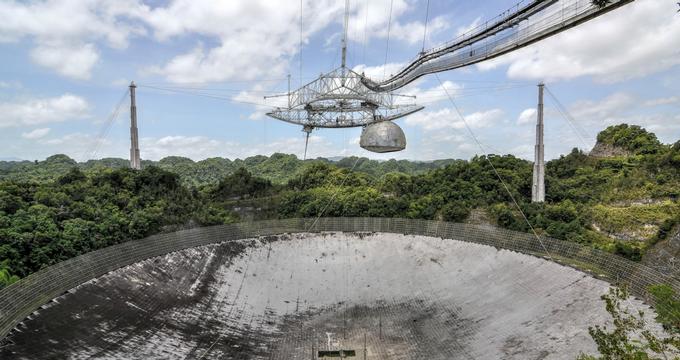 Located in Arecibo, Puerto Rico, the Arecibo Observatory is a 1,000-foot radio telescope noted for its scientific studies and breakthroughs in the fields of astronomy, planetary science, and atmospheric data collection, offering a visitor center with exhibits and public educational programming. The inspiration for the Arecibo Observatory dates back to the Cold War era of the late 1950s, which inspired research into the understanding of the Earth’s ionosphere for the purposes of developing effective anti-ballistic missile technology.

The idea for constructing a dual purpose observatory at a location near the Earth’s equator, which would be used for both defense-related ionospheric study and general astronomy purposes, was spearheaded by Cornell University professor William E. Gordon. The Arecibo area of Puerto Rico was chosen for the telescope’s location due to numerous sinkholes in the area’s karst regions, which would provide a naturally conducive environment for constructing the telescope’s dish. Construction on the observatory began in the summer of 1960 and was completed three years later, with a formal opening ceremony held for the facility in November of 1963. The telescope’s spherical reflecting mirror design has been used as a model for a number of other similar telescopes around the world, including the Southern African Large Telescope and the Hobby-Eberly Telescope in Texas. Throughout the late 20th century, the observatory gained international prominence for its notable scientific discoveries, including the discovery of neutron stars in 1968, the Nobel Prize-winning research into binary pulsars conducted by Russell Hulse and Joseph Taylor in 1974, and the first direct imaging of an asteroid in 1989

Since 2011, the Arecibo Observatory has been jointly operated by the nonprofit organizations SRI International, UMET, and USRA, under the supervision of the National Science Foundation and with additional support provided by NASA. Until the completion of China’s FAST telescope in 2016, the observatory was the largest single-aperture radio telescope in the world. In 2001, the observatory was declared an IEEE Milestone, and in 2008, it was added to the National Register of Historic Places. The observatory has become primarily associated with extraterrestrial research due to its participation in the SETI (Search for Extra-Terrestrial Intelligence) and METI (Messaging to Extra-Terrestrial Intelligence) programs and has been featured in a number of films and television series, including The X-Files, Contact, and the James Bond franchise.

As a major international facility for the study of astronomy, planetary sciences, and atmospheric data collection, the Arecibo Observatory is operated on a 24-hour basis, available to scientists from around the world on a competitive, ongoing basis for research endeavors. The telescope’s radio mirror measures 1,000 feet in diameter and 167 feet in depth, spanning approximately 20 acres within a natural sinkhole environment. 40,000 aluminum panels connected by a network of steel cables create the telescope’s spherical reflector surface, creating the world’s largest and most sensitive curved focusing antenna, which collects energy to receive data for analysis within minutes. A 900-ton platform with three supporting towers is suspended above the dish, which provides access to a 328-foot bow-shaped azimuth arm on a circular track. Complex radio receivers immersed in liquid helium allow the observatory to operate at frequencies between 50 and 10,000 megahertz, allowing analysis of atmospheric conditions from several kilometers to several thousand kilometers above the Earth’s surface. In addition to astronomy study, the observatory has also been used for a number of terrestrial, amateur radio, and military intelligence uses, including the location of Soviet radar installations during the Cold War.

In March of 1997, the Ángel Ramos Foundation Visitor Center was opened to the public, named in honor of the founder of the Telemundo television network. The facility welcomes more than 100,000 annual visitors to its 3,500-square-foot gallery space, offering interactive exhibits related to astronomy, atmospheric science, and radio telescope operations. A 20-minute orientation film, “The Arecibo Observatory: Beyond the Big Dreams” is shown periodically in the Center’s auditorium. Visitors may also explore the facility’s observation deck and take pictures of the telescope as part of brief guided tours by docents. A food stand offers concessions at the observation deck, and a Galaxy Shop sells science-themed apparel and educational gifts.

In addition to standard observation deck tours, a 30-minute VIP Tour experience is offered, allowing up to seven visitors to observe the telescope up close as part of a vehicle tour. Curriculum-incorporated field trip opportunities are also offered for elementary and secondary school student groups. Several educational program opportunities are offered for high school and college students, including an 18-week Arecibo Observatory Space Academy and a summer Research Experience for Undergraduates. Periodic public programming is also offered throughout the year, including lectures, workshops, and Astronomical Nights presented in conjunction with the Caribbean Astronomical Society.