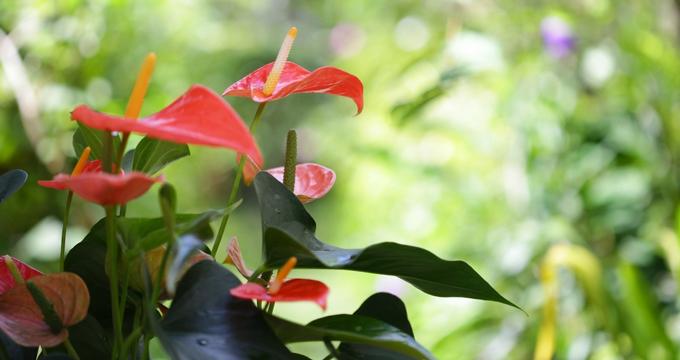 Located in Charlotte Amalie, St Thomas in the United States Virgin Islands, the Plantation Crown and Hawk Botanical Garden is a hillside public garden atop Crown Mountain, offering a variety of walking paths through tropical flower plantings, waterfalls, and other natural amenities.

The earliest-known inhabitants of Saint Thomas Island were the Ciboney indigenous people, who settled the area sometime around 1,500 B.C. and were later followed by the Carib and Arawak tribes. During Christopher Columbus second voyage to the Americas in 1493, the explorer noted sighting the island, but it was not formally settled by Europeans until 1657, when the Dutch West India Company established a post on its mainland. The island went through periods of Danish and Norwegian colonial rule in the 17th and 18th centuries, with Danish settlers establishing the city of Charlotte Amalie in 1691, named in honor of the wife of Denmark King Christian V. British occupation of the island began in the early 19th century, during which time the island began experiencing economic decline due to the decline of the sugar crop industry as its primary means of trade and income. Though the United States began looking to acquire the island as early as during the American Civil War, the island was not purchased until 1917, when the United States Virgin Islands were established as American territories as a strategic move during World War I. Following the First and Second World Wars, tourism began to rise as the major industry on the island, with annual visitorship increasing greatly due to the advent of cheap mass air travel.

The history of botanical gardens on Saint Thomas dates back to the 19th century and the island’s Danish inhabitation, when a former sugarcane plantation and estate near Charlotte Amalie was converted into a botanical garden facility by the Agricultural Society of Denmark. The facility passed ownership hands several times throughout the 20th century, eventually being opened to the public in 2015 as a commercial tourist attraction named Plantation Crown and Hawk Botanical Garden. As the island’s first official historical botanical garden, the garden preserves a 5 ½-acre former sugarcane plantation estate, including one of two extant cockpit sugar mills remaining on the island.

Today, the Plantation Crown and Hawk Botanical Garden is open as a public botanical garden facility, offering 5 ½ acres of visitor paths, tropical flower plantings, and natural attractions such as waterfalls. The garden facility is located atop the island’s Crown Mountain, the highest peak across any of the United States Virgin Islands. The facility provides spectacular views of the nearby Charlotte Amalie area, which is one of the busiest port cities in the Caribbean, docking more than 1.5 million annual cruise ship visitors and serving hundreds of ferries and yachts weekly in its harbor area. A number of historic tourist attractions are offered throughout the city, including a large number of preserved examples of Danish colonial architecture and a wide variety of rum distilleries and jewelry and arts crafters.

Visitor paths throughout the 5 ½-acre facility offer a variety of leisure and exploration opportunities, meandering through natural landmarks such as waterfalls with a drop of up to 125 feet. Natural flora and fauna are on display throughout the garden, including native plants of the Virgin Islands and local wildlife such as peacocks, turtles, and tropical fish. Major plantings include bromeliads, heliconias, cacti, bamboo, and palm trees, with all plants identified with signs and species information. A series of terraces provide spectacular views of the nearby Caribbean Sea and Atlantic Ocean at their peak, while a number of outdoor gazebo areas offer quiet relaxation in a natural setting. A Plant Maze allows visitors to explore native flora while working strategically to successfully complete a path, while a Red-Footed Turtle Habitat provides a safe space for wildlife.

A gift shop on site offers local souvenirs and apparel, including clothing, garden decorations, and Caribbean rum balls homemade with local island rum. Locally-themed food and beverages are also available at the garden’s main pavilion for purchase and may be eaten throughout the park. The facility’s Villa Botanica estate is also available for special event rental, including private wedding and reception rentals. A variety of wedding rental packages are available, offering onsite catering, reception amenities, and use of the site’s historic structures. Dining options for receptions and rehearsal dinners are also offered at the facility’s onsite restaurant venue, which can accommodate up to 200 guests indoors. Larger rental groups may also be accommodated with gala stations set up throughout the property’s outdoor facilities.

More Things to Do in St Thomas