Things to Do in Canada: Royal Tyrrell Museum of Paleontology 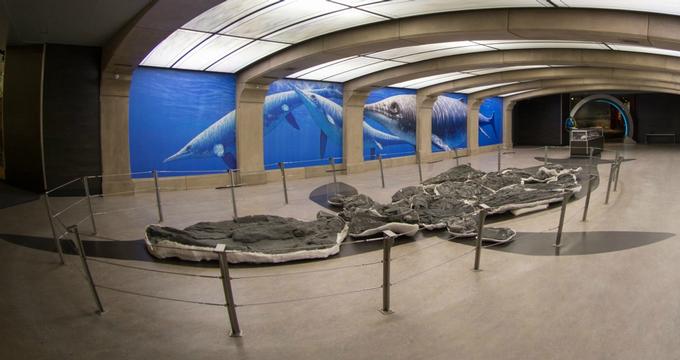 Situated in the heart of Canada's Badlands, the Royal Tyrrell Museum is located in Alberta's Midland Provincial Park. Visitors should plan on spending at least two hours exploring the museum's many exhibits, however, they could easily spend two days here.

Two-day passes are even available to make sure guests don't miss a thing. The Royal Tyrrell Museum of Paleontology is the only museum in Canada dedicated solely to paleontology. The museum also houses the largest displays of dinosaurs in the world, in addition to a broad array of educational, fun, and creative programs that help bring the past of Alberta to life.

The mission of the Royal Tyrrell Museum is to be a scientific and public museum that is recognized worldwide, with a dedication to collecting, preserving, interpreting, and presenting paleontological history. The museum has particular emphasis on the fossil heritage of Alberta. Visitors can step back into prehistoric times as they get up-close to several of the mightiest dinosaurs that once walked throughout what it is now Canada. There is something for every visitor at the museum, from fun interactive activities to thirteen continuously evolving exhibit galleries to the beauty of the Canadian Badlands.

It's somewhat difficult for people to really appreciate how large dinosaurs were until they stand next to a reconstructed one. Dinosaur Hall at the Royal Tyrrell Museum of Paleontology is home to one of the largest displays of dinosaur fossils in the world. The gallery features easily identified herbivores, such as the Stegosaurus, to the dangerous Tyrannosaurus rex and the massive Camarasaurus. The exhibit is sure to excite any dinosaur enthusiast.

Only a portion of the thousands of fossils in the Royal Tyrrell Museum's collection can be on display at a time. The rotating Fossils in Focus exhibit gallery showcases several of the most scientifically significant and remarkable fossil specimens. The Cretaceous Garden exhibit highlights how the landscape of Alberta once looked during prehistoric times, a very different picture of what the land looks like today. Dinosaurs, as well as other creatures, once lived in a coastal, lush environment with spots of marshes, ponds, and swamps. Visitors have the opportunity to experience what this area of Canada was like long ago, as well as view the largest collection in the country of prehistoric plant relatives.

The work done by Royal Tyrrell Museum scientists in the Dry Island Buffalo Jump Provincial Park served as the inspiration behind the Cretaceous Alberta exhibit. This exhibit offers a rare look at the province of Alberta of more than sixty-nine million years ago, and features four Albertosaurus traveling across a dry river channel. The gallery is based on the scientific evidence that was gathered from a bonebed, or mass grave, where at least twenty-two Albertosaurus sarcophagus skeletons were unearthed.

The land of the Canadian Badlands was once covered by water during the Devonian Period, a fact that is hard to believe looking at Alberta today. The Devonian Reef exhibit highlights the "Age of Fishes," which was marked by massive marine reefs and a large number of ancient fish species. One of these marine animals were the microscopic plankton. The remains of these prehistoric creatures are now the source of the region's fossil fuel industry.

More Things to Do in Canada

Things to Do in Canada: Wild Water Works

Canada Things to Do: Hopewell Rocks