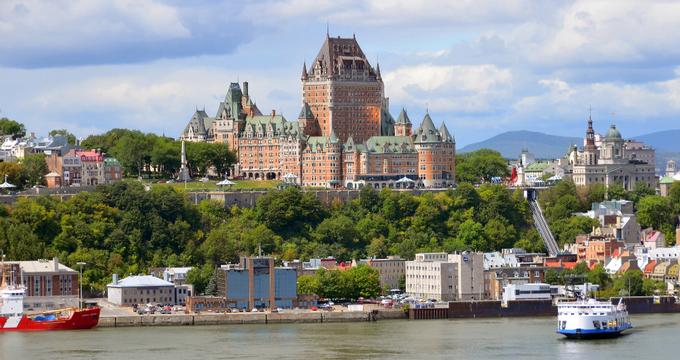 A vast and vibrant nation renowned for its natural beauty, friendly people, and impressive cities, Canada is a wonderful place to visit on vacation. Whether you’re roaming around the parks of Victoria, admiring the architecture of Vancouver, or visiting the many landmarks and hotspots of Toronto, there’s lots to see and do all over Canada’s many provinces.

One of the most fascinating Canadian provinces is undoubtedly Quebec. Known as the French-speaking part of Canada, Quebec is located in the eastern part of the country and is famous for its distinctive culture, cuisine, and architecture. It's a perfect place to enjoy vibrant nightlife, excellent food, awe-inspiring scenery, and some super city locations too.

The biggest city in Quebec is Montreal, and this is where many travelers start their journeys into this part of Canada. Visitors to Montreal can admire the beauty of the city's Old Port, take a walk around its romantic Botanical Gardens, climb up Mount Royal for some stunning views, or explore key landmarks like the Notre Dame Basilica.

The second biggest city in Quebec is the province's capital: Quebec City. Founded on the banks of the Saint Lawrence River, Quebec City has history going all the way back to the early 1600s. Some of its top landmarks include Montmorency Falls, La Citadelle de Quebec, and the Petit Champlain shopping quarter. Here’s how to plan a day trip to Quebec City from Montreal

Getting to Quebec City from Montreal

Quebec City is around 150 miles away from Montreal, so the journey between these two cities is quite a long one. If you’re planning a day trip, you’ll need to set off early and plan on returning to Montreal quite late in the evening in order to have a full day of exploration in Quebec City. You can choose to travel by car, bus, train, or even plane.

Getting to Quebec City from Montreal by Car

Driving to Quebec City from Montreal is a good option for people who don't mind hiring a rental car and making the trip themselves. The drive is a straightforward one, following the Route Transcanadienne in a straight line from one city to the other.

On a good day, with minimal traffic, you can arrive at Quebec City in about two and a half hours. Plus, the bonus of taking your own rental car is that you can choose when you leave, when you set back, and what stops you make along the way.

Getting to Quebec City from Montreal by Bus

If you'd like to choose the most affordable option to do your day trip from Montreal to Quebec City, the bus might be the best option for you. However, if you do choose the bus, you'll need to plan the day accordingly and be sure not to miss your bus as there's only one service currently running between these two cities.

The Orléans Express links Montreal and Quebec City. It makes some stops along the way, so the total journey time is around three hours on average, but the buses themselves are spacious and comfortable, equipped with Wi-Fi connections and power outlets for passengers. You can also choose to take a guided bus tour to Quebec City with a tour operator.

Getting to Quebec City from Montreal by Train

The train ride isn't particularly scenic or special, but the trains are cozy and reliable. You should arrive at Quebec City in around three hours on average, and you can get a good price on your ticket if you reserve in advance.

Getting to Quebec City from Montreal by Plane

There are a couple of airlines, including Air Canada, offering direct flights across Quebec from Montreal to Quebec City. This is one of the fastest ways you can get between these two cities, as the average flight time is less than half an hour.

You'll fly out of Montreal-Trudeau Airport and then land at Quebec City Jean Lesage International Airport. Both of these airports are about half an hour outside of their respective cities, so you'll have to add the extra traveling time, plus the time to check-in and get through security lines, onto your overall journey.

Important Information and Things to Do in Quebec City

- Getting Around Quebec City - For the purposes of a day trip, you might not even need to use public transport or taxis to get around Quebec City. You can probably just walk around and see most, if not all of what you want to see with ease. The city is quite compact and a lot of its best buildings and hotspots are relatively close together. If you do need to make use of public transport, the RTC buses will take you to lots of the main attractions and you can get a 1-day bus pass at a good price. You can also rent a bicycle and enjoy the city’s many miles of bike paths and trails.

- Things to Do in Quebec City - If you only have a day and want to see the top sights of Quebec City, you'll definitely want to start off in the UNESCO World Heritage Site of Old Quebec. This is where you'll find Quebec City's most inspiring and impressive colonial architecture, with areas and landmarks like the Plains of Abraham and the Petit Champlain district standing out as some of the top spots you won't want to miss out on. You might not get to spend a night there, but be sure to admire the amazing Chateau Frontenac hotel as well. Other good things to do include visiting the amazing Montmorency Falls and the extraordinary glacial valley location of the Jacques Cartier National Park.

25 Best Things to Do in Alberta, Canada