Things to Do in San Francisco, CA: The Walt Disney Family Museum (WDFM) 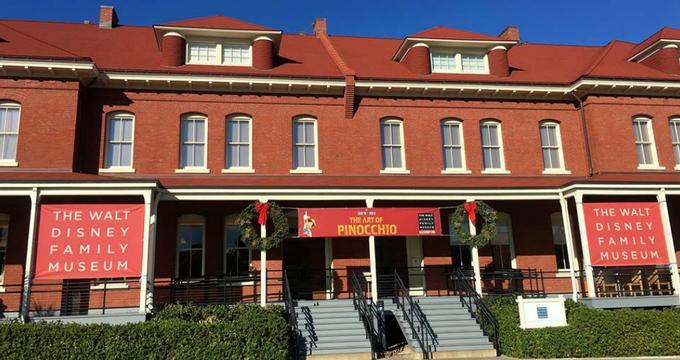 Located in the picturesque Presidio of San Francisco, the Walt Disney Family Museum (WDFM) honors the remarkable life story of Walt Disney through state-of-the-art exhibits and contemporary, interactive galleries. Situated in three existing historic buildings on the Presidio’s Main Post facing the Parade Ground, the American Museum opened in 2009 and featured an array of award-winning exhibits and displays, including cartoons, early drawings, music, films and an inspiring model of Disneyland.

The mission of the Walt Disney Family Museum is to inform visitors about the remarkable life of Walt Disney and to inspire them to use their imagination to follow and achieve their dreams.

The museum also features a large-scale model of Disneyland. The Museum features ten permanent galleries that tell the remarkable story of Walt Disney's life, beginning with his ancestral history and ending with his death on 15th December in 1966. Pictures of Walt Disney's beloved miniature Carolwood Pacific Railroad, including his Lilly Belle locomotive are also on display.

The lower level of the museum is home to a Fantasia-inspired state-of-the-art digital theater that screens Disney classics on a daily basis, and the lobby of the Museum exhibits the 248 awards that Disney won during his career, including several Academy Awards, and the Presidential Medal of Freedom.

‘Deja View: The Art of Andreas Deja’ features numerous works by the accomplished and versatile character animator, Andreas Deja and includes maquettes of iconic characters such as Gaston, Hercules, Scar, and Lilo.

The Walt Disney Family Museum offers a variety of educational programs that honor the work of Walt Disney and aim to inspire, innovate and educate learners of all ages. Creative and innovative programs and initiatives include studio programs, classes, workshops, camps and professional mentoring, as well as summer classes, international festivals, and teen squads.

Multi-day and intensive studio classes for students of all ages and levels of expertise include fundamental principles of animation, art, and design given by industry professionals and teaching animators. Other classes include After-School Animation (Grades 6-12), Beginner Animation, Digital 2D Animation for Adults, Foundation Drawing (Grades 9-12), and Understanding Photoshop (ages 14 and above).

The Walt Disney Family Museum is located in three historic buildings in the beautiful Presidio of San Francisco and is open to the public on a daily basis from 10:00 am to 6:00 pm (closed on public holidays). The Museum offers self-guided, and group tours, which need to be booked in advance and group programs offered include Interactive Team Experiences, Translated Audio Guides, Special Exhibitions, Film Screenings, and Summer Youth Groups.

The Museum Café offers light seasonal fare inspired by locally sourced ingredients and is open to both museum visitors and the public during museum hours. Diners can enjoy indoor or outdoor dining with beautiful views over the Presidio’s main parade grounds.

Back to: Fun Things to Do in San Francisco

Things to Do in San Jose, California: Japanese American Museum of San Jose