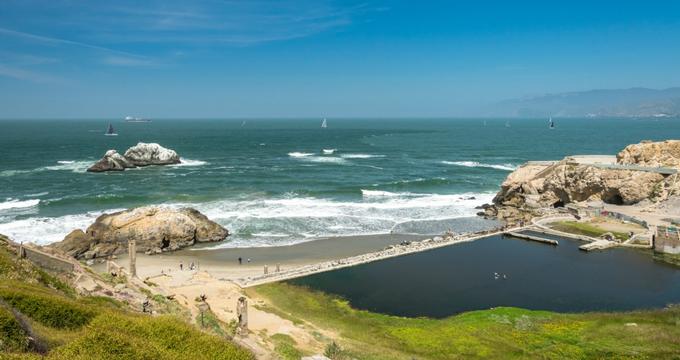 The ruins of the Sutro Baths can be found in the area surrounding Lands’ End in Outer Richmond, west of San Francisco, California. Conveniently located close by Sutro Heights Park, Cliff House, and Seal Rock, this is one site to visit on what is a fantastic day's outing. The facility caught fire in 1966 but the remaining structure is still something to marvel at and proves almost as popular as when it was a fully functioning bathhouse.

The once magnificent Sutro Baths was an ambitious project at the time and was designed and developed in 1894. Adolph Sutro, a self-made millionaire who also designed Sutro Heights and Cliff House, had a special interest in natural history and marine studies. He built the massive public bathhouse covering 3 acres, and it featured some truly impressive and ingenious engineering and artistic details. The dream was to provide a healthy and inexpensive swimming facility for San Franciscans. At the height of its glory days, the bathhouse featured seven swimming pools at various temperatures, slides, trapezes, springboards, and even a high dive. Using the power of the Pacific Ocean’s high tide, the baths could be filled with the 1.7 million gallons of water in just one hour. They had room to accommodate 10,000 people and rented out bathing suits and towels to visitors.

As is true of the other properties Sutro designed, the baths did not purely serve a recreational role; he wanted them to be educational too. The grand front entrance contained natural history exhibits as well as galleries of sculptures, tapestries, artifacts, and paintings from many different cultures, including Mexico, Asia, the Middle East, and China. The most popular display was always the collection of Egyptian mummies. Back in the late 1890s, there were several transportation links to the area and it served as a crowning jewel during an all-day family excursion to the shore.

The venue wasn’t simply for recreation and education either, and also functioned as a cultural hub putting on band concerts, talent shows, and giving a wealth of different restaurants a home over its lifetime.

Sadly, the Baths did not prove commercially successful in the long term and was hit extremely hard by the Great Depression. After Adolph Sutro died in 1898, his family continued running his estates. As new public health codes came in and public transportation died away, the facility began to leak money. It was briefly turned into a skating rink, but it never proved as popular as it once had been and couldn’t pay to maintain itself. In 1964 there were plans to replace the baths with a high-rise apartment block; demolition began but before it could be finished a fire in 1966 destroyed what was left of the once great Sutro Bathhouse. The apartments never came to pass and the Sutro Baths remains have been part of the Golden Gate National Recreation Area since 1973.