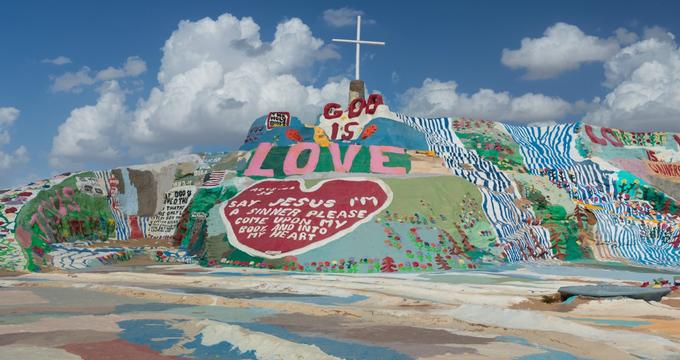 Slab City is an off-grid no-man's land inhabited by eccentrics, hippies, nomads, wanderers, retirees, and others. Built off the back of Camp Dunlap, it takes its name from the abandoned concrete slabs left behind by the remains of the World War II barracks. It is mainly used by the “snowbirds,” a group of migratory transients who set up shop during the cooler winter months, though they mostly head north before the unforgiving summer heat hits. There are a few dedicated year-round residents, but if you want to join in the party properly, head there in the winter season. The camp is located in the Sonoran Desert in Imperial County, California, a location affectionately known as the California Badlands.

Decommissioned and uncontrolled, there are no charges for parking. The site has no official electricity or plumbing. The residents mostly provide for themselves using generators and solar panels. The nearest contactable point of traditional civilization is approximately 4 miles southwest in Niland, where the inhabitants normally head to do basic shopping.

The camp has gained considerable notoriety through press coverage and by featuring in a few films, pop culture, and documentaries. It’s probably the largest, most well-known haven of its kind and appeals to anyone looking to exist off-grid, even if just for a while.

You know you’ve arrived at Slab City when you see the easily recognizable and colorful Salvation Mountain, which acts as a gate or welcoming sign of sorts. It’s a small hill of about three stories in height, covered in acrylic paint and festooned with bible verses. It was a project undertaken by Leonard Knight. The Folk Art Society of America declared it a site worthy of preservation and protection in 2000. While Knight himself died back in 2014, the community has taken on the task of constantly maintaining the site. Many visitors arriving at Slab City donate lead-free acrylic paint to the ongoing project.

There is no religious meaning behind the name. It’s simply a local colloquialism for a place out in the middle of nowhere. This sustainable, experimental, and habitable art installation is located in the Slab City area. The site now hosts its own desert art gallery with artists erecting and displaying works within its boundaries. It is threatened with having the land leased out from under its very feet and has a website dedicated to its preservation and relevance, functioning as yet another port of call for donation. It is quite possibly one of the only galleries in the world open from sunset to sunrise 365 days a year and features works from a range of artists, not only those who live in the community itself. A fascinating and worthy pilgrimage!

This is an open-air nightclub with no equal or alternative in the California Badlands. Built by Builder Bill, an ex-homeless man who found his home in Slab City, it’s the place where the community comes together to boogie on a Saturday night. The stage seems to have a fairly welcoming open invitation to all those passing through, and it can be a rich and diverse melting pot of creativity and talent. Equally, it has been known to descend into anarchy, so be forewarned. The club has a stage, lights, amplifiers, and speakers as well as recycled furniture for comfort.