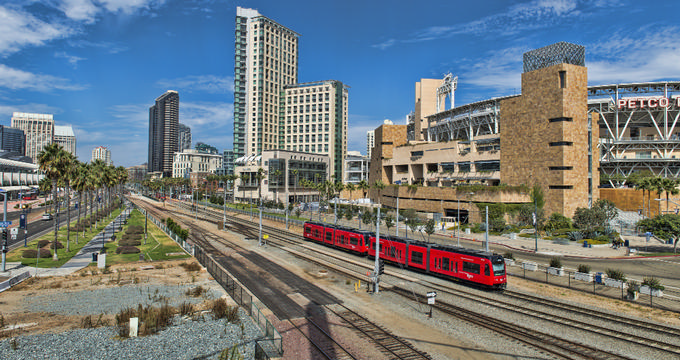 The San Diego Trolley is a simple light rail transportation system taking people all around the beautiful city of San Diego. Known to locals simply as 'The Trolley', the San Diego Trolley is the oldest of its kind in the entire United States and first started operating back in 1981. It's part fo the San Diego Metropolitan Transit System (MTS) and serves 53 stations over the course of around 53 miles of rail in total. 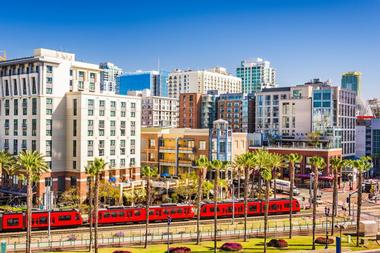 The San Diego Trolley is highly popular with both locals and tourists, being statistically ranked as the fifth most popular light rail system in America, with around 120,000 people using the trolley each and every day. It's a great way to get around, but if you're new to the area or are planning a trip to San Diego and want to know more about the trolley, this is the place to be.

First of all, let's look at some important details and facts about the San Diego Trolley. The trolley operates on a daily basis but doesn't operate around the clock, with the three main lines running from 5am until midnight. Some limited service can be found between midnight and 5am, but there is no trolley service whatsoever between 2am and 3.30am.

The trolley passes by most of the city's major tourist attractions and important landmarks, but doesn't cover every single spot of ground in San Diego, so it might not go exactly where you want it to. The trolley operates on three main lines and a fourth special one. The three main lines cover 53 stations in total and are designated by color as the Blue Line, Orange Line, and Green Line.

There's also a special Silver Line, which was introduced in 2011 and only runs for a 2.7 mile loop around downtown San Diego. It makes 9 stops on its circuit and loops through 12th and Imperial Transit Center. The Silver Line is a nice way for tourists to get around the downtown district of San Diego, but its hours of operation are limited.

Trains on the Blue Line run every 15 minutes in general, but that wait time is cut in half during peak rush hours on weekdays. Later in the evening, the Blue Line trains on the San Diego Trolley start running a little more slowly, every 30 minutes on average. For the Green Line and Orange Line, the San Diego Trolley runs every 15 minutes in general but is cut down to every 30 minutes on Sundays, evenings, and weekend mornings. 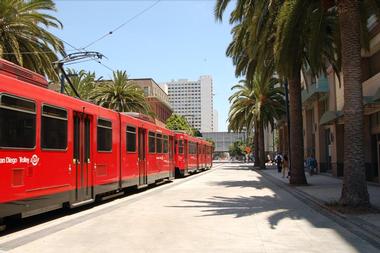 In general, the Green Line is one of the most popular options for travelers as it runs along the coastline and features stops near several major locations like the Maritime Museum, the Cruise Ship Terminal, the USS Midway, and the Seaport Village district. However, the Blue and Orange Lines do have their own advantages. It's important to note that the San Diego Trolley does not serve locations like the San Diego Zoo, Balboa Park, Legoland, or the airport. 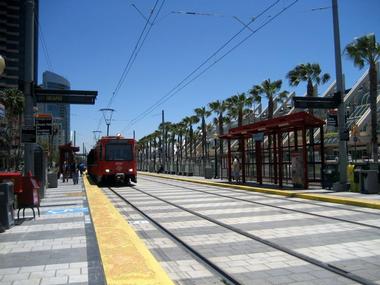 If you actually want to hop on board and enjoy a ride on the San Diego Trolley, you need to be prepared. You'll buy your ticket before you get on the train, so you need to keep it with you at all times and ensure it doesn't get lost. San Diego Trolley stations feature automatic ticket machines which are quite easy to use and take cards and cash. Simply follow the instructions on the machine to purchase your ticket.

A standard one-way ticket on the San Diego Trolley costs just $2.50 and lasts for two hours. Any youngsters aged under 6 can ride for free, and you can freely transfer from one line to another, as long as it's all part of the same one-way trip. You may also choose to buy trolley passes, which allow you to travel anywhere you like on the San Diego Trolley for a full day. A single day pass can be purchased for just $5 and also works on MTS buses too. Multi-day passes and monthly passes can also be purchased for people who are staying in San Diego for a little while on vacation or living in the city, and discounted rates are available for seniors and anyone under 18.

The simple rule to follow is that if you plan on making two or more trips in a single day on the San Diego Trolley, buying a day pass is the smart option as it will give you the most value. Once you've got the ticket, be sure to check the map and signs at the station you've selected to ensure you're on the right route. The trolley itself will also have its destination written on the side, so you can quickly and easily confirm that you're going the right way.

23 Best Places to Visit in Miami, Florida on a Date