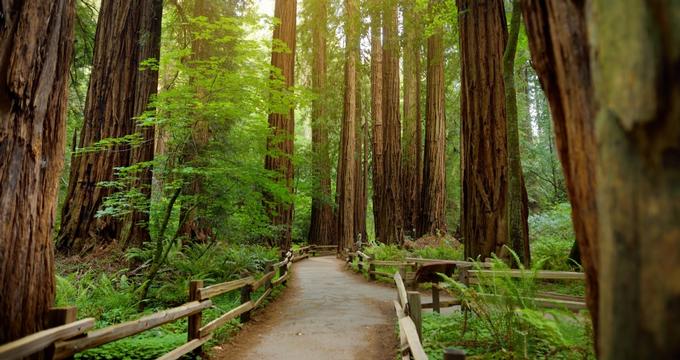 The redwoods of California are actually two distinct species of trees, both with their own extremes, such as being the biggest or tallest. These are the giant sequoias and the coastal redwoods. The giant sequoias are often called the “big trees” and are found only within the Sierra Nevada Mountains by the state’s eastern border. Incredibly massive, they grow to around 280 feet tall and can measure up to 23 feet across.

The biggest of their kind even grow a little above 300 feet tall and spread to 30 feet. Some of these trees are as old as 3,000 years, but the ones in the Ancient Bristlecone Pine Forest just off Highway 395 to the east of the state have been there for about 5,000 years.

Even taller are the coastal redwoods, which are obviously found on the state’s coast by the north border. They are, in fact, the tallest living things on Earth, growing up to 350 feet in height, with some even reaching the 360-foot mark. They’re literally as tall as a 36-story building.

Redwood forests are all over California, and there are a dozen parks that have the word “redwood” in f their names and are part of national and regional parks. Any one of these places is enough to show you how magnificent these trees are, but here are some of the best places to visit:

- Prairie Creek Redwoods State Park - This park between Crescent City and Eureka also happens to be home to lots of Roosevelt elk. The place is really magical, especially during the summer mornings, when it gets foggy. Make sure to check out Fern Canyon, which, as the name suggests, comprises walls that are draped in all kinds of ferns, making it look like a green waterfall.

-Redwood National Park - Composed of many redwood forests, the entire park protects about half of the state’s redwoods. There are a lot of flat and easy trails to hike here, where you can see oak woodlands, wild rivers, prairies, and more. The place is also home to a couple of endangered species like the northern spotted owl, Chinook salmon, brown pelican, and Steller's sea lion. Along with Yosemite National Park, Redwood National Park is one of the only two UNESCO World Heritage sites in California.

-Muir Woods National Monument -This one’s just 12 miles from San Francisco and is quite accessible thanks to its well-maintained trails that pretty much anyone can follow. You can also take a shuttle bus from Sausalito to get here. The trees here aren’t as big as the ones found in other parks, but the surroundings make one of the best spots for a hike. The rangers here also give guided walks frequently.

-Yosemite National Park - Just 4 hours east of San Francisco is Yosemite’s biggest redwood forest, called the Mariposa Grove, and it is home to a lot of giant sequoias. There are about 500 of them and you can see them even at the parking lot. This one is particularly popular during the summer, so you might have issues with parking if you plan to visit during that season.

-Big Basin Redwoods State Park- This one’s located in the mountains near San Francisco, and it not as crowded as other parks due to its location. Here, people can spend the night in one of the tent cabins. If you find the Muir Woods to be a bit too crowded, you can head over here.

-Petrified Redwood Forest - The forest west of Calistoga got its name from the fact that much of it has been turned to stone. This happened because the trees were covered in volcanic ash and petrified over time. It’s a private attraction, so there’s an admission fee.

-Sequoia National Park - Looking for the largest of sequoia trees? Go here. The trees here are not only big, but old as well, with some of them reaching 2,700 years. Worthy of note is the General Sherman Tree, which is arguably one of the most impressive of its kind. There’s also the General Grant Tree near the Lodgepole Village.

There are also some redwood forests that are “drive-thrus,” meaning they have trees with holes cut in the middle so that people could literally drive through them. It’s become quite a novel tourist attraction and there are a good number of them that you can visit:

-Chandelier Drive - This one’s a privately owned attraction, so you’ll need to pay admission. This is said to be one of the best of its kind in California.

-Shrine Drive-Thru - This one also charges a fee for entry, but one thing that’s unique about it is that the tree is naturally split. Meaning that nobody had to cut a hole through the tree so that people could drive through it.

-Klamath Tour Thru Tree - Located north of Klamath Bridge, this attraction is big enough to fit most cars and even vans.

-Pioneer Cabin Tree - This one is in Calaveras State Park. It’s not exactly a “drive through” since cars aren’t allowed here, but you can walk through it via a 1.5-mile loop trail.

-Hercules Tree - What makes this attraction remarkable is that there’s a room carved inside the tree. It’s located in the Mountain State Forest.

-Tunnel Log - Located in Sequoia National Park’s Giant Forest by the Moro Rock Road is a fallen tree with a 17-feet-wide arch cut out of it for people to pass through. While you’re there, make sure to check out Tharp’s Log, another fallen tree that was turned into a house.

When visiting any of these locations, make sure to know when the parks are open for visiting. You might also want to check if any admission fee is charged. Most of these sites have online guides so you can easily plan how you’re going to get there.

There are also a lot of organizations whose members have dedicated themselves to preserving these beautiful works of nature. You might be interested in contributing as well.

Best Things to Do in California: Mendocino Coast Botanical Gardens