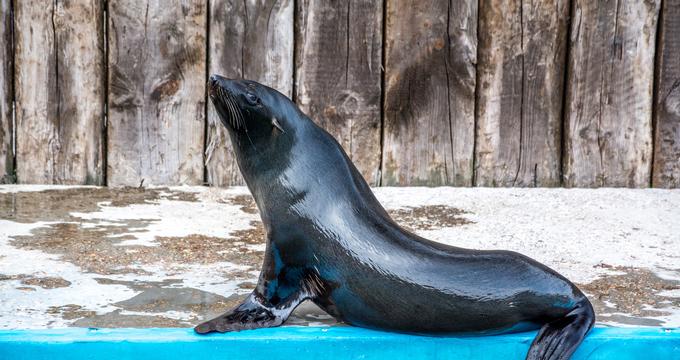 The Pacific Marine Mammal Center is a nonprofit animal rescue and rehabilitation facility located in Laguna Beach, California. Its two main missions are to rescue and rehabilitate marine mammals as well as promote ocean conservation through research and education. The most common ocean-dwelling creatures found in the center are Northern elephant seals, Pacific Harbor seals and California sea lions. It is also has sufficient capacity to temporarily house small whales and dolphins.

The center is part of a wider network called Marine Mammal Stranding Network that helps animals all across the US coastline. Currently, its resources are primarily focused on marine mammals stranded along the Orange County coast, stretching from Seal Beach to San Onofre.

Many of the animals washed ashore are dehydrated and underweight due to a variety of reasons, including illness and injuries. Some of them were the result of negative human interactive such as net strangulation and ingestion of trash. Members of the public are urged to call the center to report about sightings of these stranded creatures. Trained staff will be dispatched to determine if human intervention is needed, which it will bring back to the center to receive treatment.

Established in 1972 as Friends of the Sea Lion, the Pacific Marine Mammal Center is the first marine mammal rehabilitation facility in California. Interestingly, it was set up even before the Marine Mammal Protection Act was passed in 1972.

At its inception, the center only had three volunteers, two of whom were lifeguards at the beaches in Orange County. They had initially housed seals and sea lions inside his house but as the organization continued to expand, a larger facility was needed. They eventually took over a barn previously occupied by the local SPCA, which continues to be the center’s rehabilitation hub up until today.

Unlike Sea World or zoo, the seals and sea lions in the center are not used for entertainment purposes. Instead, most of them are ill and injured animals that require medical attention and rehabilitation. As such, they are housed in pools behind fences away from close contact with humans. However, visitors will still be able to observe the animals safely from a distance. Such an arrangement is critical for the center whose ultimate goal is to release the animals back into the wild once their health has been fully restored.

The number of creatures at the center fluctuates annually and seasonally. The animal count could range from a few hundred to about a thousand marine mammals per year. Depending on climatic changes, it could increase or decrease the number of distressed animals being washed ashore. Some of these factors include warmer waters and spike in the water’s radiation level, all of which might affect female sea lions ability to hunt for prey and care for their young. On average, there are also more rescued animals during late winter and early spring. This is because seal pups typically wean themselves off their mother during this period, and they become more prone to suffer from malnourishment and dehydration among other medical conditions.

Visitors can expect to see the marine mammals exhibiting their natural behavior at the center’s outdoor pools. Because they have not been professionally trained, they will not be able to perform typical crowd-pleasing acts such as balancing balls on their noses or jumping through hoops. Instead, it is more likely to find them swimming and frisking around with one another given that they are known for their social behavior and playfulness. Informative displays are available around the center to educate the public about these marine animals.

Since the center is wholly privately funded, it relies on its team of regular volunteers to run the center from caring for the animals to manning the gift shop. It is likely that visitors will be greeted by one of the enthusiastic volunteers during their visit. These volunteers tend to be more than happy to explain not only the history and mission of the center, but also to share stories of the rescued animals that are present onsite.

For close up views of the animals, there is a 24-hour live streaming video from one of the center’s pools. Hosted on its website, visitors will get uninterrupted intimate views of the rescued animals at different times of the day. There are also videos of staff and volunteers releasing rehabilitated wild animals back into the ocean posted on YouTube. Get ready to ooh and aah at the health transformation of these adorable creatures as they leap on the beach.

The center offers a variety of educational programs as part of its mission to educate the public. Group activities comprise hour long ‘field trip’ presentations to learn about the world of marine mammals. Its most popular program is the ‘Marine Mammal Rescue, Rehabilitation and Release’, which provides more information about the center’s work and the animals that it treats. Girl Scouts can also enroll in specially designed program that would fulfill part of the requirements of their ‘It’s Your Planet – Love it!’ Leadership Journey. They will learn about marine environmental issues as well as ongoing ocean conservation efforts.

No summer is complete without going for a summer camp. For kids who love marine creatures, the facility offers Camp Pinniped, which is a day camp with weekly sessions for those between 8-10 and 11-13 years old. They would be able to observe the inner workings of a marine mammal hospital and understanding how the staff tender to the sick animals. Their learning will be reinforced through hands-on sessions where they get to experience preparing animal feed and clean up their pens as well as through games and presentations. From September to May, the center runs an after-school program held once a month to educate children about marine science through play and experiment. It is suitable for children ages 8-13.

In 2015, the University of California Master Gardener program partnered with the Pacific Marine Mammal Center to revitalize the garden in and around the site. More than 50 new plants were added along the fence and near walk ways, including Butterfly Cassia, California Fuchsia and White Yarrow. The flora and fauna serves to not only beautify the surroundings, but also to attract bees and butterfly to pollinate the seeds.

Alongside the center’s focus on protecting marine animals, the garden raises awareness of another important but fragile ecosystem that aim to enhance the visitor’s experience. Informational signs and educational materials about the plants are placed throughout the landscape to create a holistic learning environment for the public.

The Pacific Marine Mammal Center is found at the foot of the Laguna Canyon hills. Near the facility is the Laguna Beach Animal Shelter. This is another non-profit organization dedicated to providing medical care for sick and injured animals as well as a temporary shelter for stray and abandoned animals. The facility primarily houses domesticated animals including dogs, cats and birds among other animals. Visitors can go there to adopt a pet or call in to alert members of the shelter about any animal-related issues in Laguna Beach and Laguna Woods.

Another attraction located close-by is the Laguna Beach Dog Park. Spanning over two acres, the park was the first dog park in Orange County when it was founded in 1992. Today, it continues to commit itself to its mission of providing an open space for dogs to roam leash-free and socialize with other dogs. The dog park provides a securely fenced environment for the animals to interact, and has also been divided into two areas, one for small dogs and another for big dogs to prevent unnecessary injuries. There is a water fountain in the park so that dogs can stay hydrated, as well as plenty of shade and benches for owners to rest and socialize with each other.

Back to: Best Things to Do in Laguna Beach.

Things to Do in San Jose, California: San Jose Museum of Quilts and Textiles

Things to Do in San Jose, California: Japanese American Museum of San Jose