Orange County Things to Do: Nixon Library and Museum 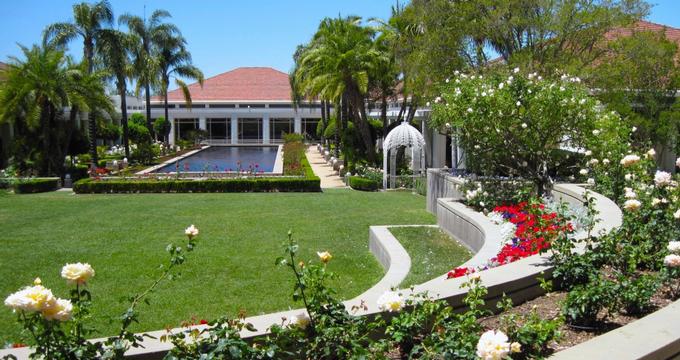 The Nixon Library and Museum is laser focused on the specific time period that he was President and the way that it impacted the direction that the United States went after that. Visiting can help history come alive, especially for people who were not yet alive during that time period. Located in Yorba Linda, Orange County, California, the Nixon Library and Museum opened on 15 acres in 2016 and includes the new permanent galleries, Nixon’s helicopter, and his birthplace.

Orientation Theater - All tours of the library and museum will start at the theater, which includes a multimedia presentation introducing Richard Nixon and an overview of his 50 years of public service.

“Wave of Change” - Featuring vivid super graphics that stretch along the curved walls of the gallery, visitors will experience sights and sounds that help bring to life a selection of the most important images, events, and people that occurred right before Nixon was elected President of the United States in 1968. One of his candidacy banners hangs overhead.

Oval Office - This exhibit is a replication of the way that the Oval Office looked when Nixon was President, and even allows visitors to sit behind the President’s desk (they are even allowed to take photos!).

Vietnam War - Visitors will be confronted with the war in Vietnam, much like Nixon himself was in 1969. Walk around and explore the conversation happening in the country at that time, both about the war and the decisions Nixon made around it. There are also artifacts and images that focus on some of the prisoners of war (POWs) during their time there, as well as their homecomings.

Domestic Policy Vision - Learn about Nixon’s approach to domestic policy, especially as it related to both state and local governmental power, the regulation of the federal government, as well as fiscal responsibility. This exhibit also focuses on environmental regulations (Nixon helped create the EPA), healthcare, drug use, and civil rights.

Communism - Taking a look at the Cold War and its impact on Nixon’s approach to communism and eventual policy of detente. There is also a large section of the actual Berlin Wall located at the exhibit.

First Lady - This exhibit focuses on Pat Nixon, the First Lady. From her domestic initiatives to her travels all over the world, it makes clear just how influential she was and how much of an impact her presence had throughout the entire world, not just in the White House.

These are only a selection of the larger number of exhibits that are located at the library and museum. There is always a fascinating selection of rotating temporary exhibits as well!

The library and museum offer special events on a fairly regular basis. Musical concerts are free to the public and held on Sundays, with doors at 1:30pm and music starting at 2:00pm. The events vary between classical pianists, violin students, brass bands, and children’s choruses. There are also occasional author events where the author will come and discuss their books, followed by a question and answer session. Movies are also shown occasionally, with themes and topics that relate to the time Nixon was President. Seasonal events are also offered, like Christmas themed concerts.

Keep an eye out for the webinars offered as well, which allow visitors to learn about various Nixon era topics from a knowledgeable professional without having to leave their own homes. Recently topics have included the Vietnam War from both the run up to the war and the process of getting through it as a nation.

The Nixon Library and Museum always welcomes students to tour the premises for field trips. Tours are offered free of charge for students, including teachers, adult chaperones (up to the recommended one adult for every ten-student ratio) and bus drivers! There is a request form available on the website for teachers to fill out ahead of time, which can be submitted to the staff either through email, fax, or mail. Tours typically take about two hours and start at either 10am or 10:30am with a dedicated tour guide. Tours can be catered to specific lesson plans with advance notice. Make sure to remind students that there is no running or food, or drink allowed on the premises. Cell phones can be used for photographs (however, no flash photograph is allowed on many of the artifacts), but usage should be limited. Backpacks will need to be left on the bus.

More Things to Do in Orange County