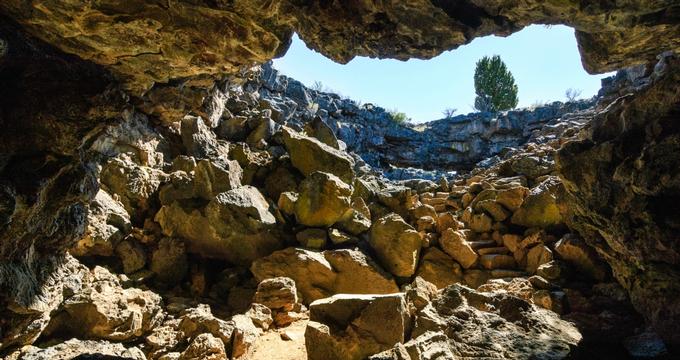 The area that now encompasses Lava Beds National Monument is one of the longest continually-occupied regions on the North American continent, located along the northeastern side of Medicine Lake Shield Volcano. Over the course of the past 500,000 years, a number of volcanic eruptions have dramatically altered the area’s landscape, with dating on the area’s lava flows tracing back as far as two million years and features such as the Basalt of Hovey Point dating back at least 450,000 years. The monument area is best known for its lava tube caves, created approximately 60,000 years ago, which were created by variation in surface and underground cooling rates. Other significant features created by lava flows from the volcano include cinder and spatter cones, fumaroles, pit craters, maars, and hornitos.

The Lava Beds National Monument area is the historic home of the Modoc indigenous people, who first arrived in the area near the California-Oregon border over 11,000 years ago. In 1826, the first European settlers arrived in the area, and clashes between the two populations eventually resulted in the Modoc War of 1872-73. As a result of the war and diseases brought by European settlers, many of the Modoc people were killed, and eventually, the tribe folded into the Klamath Tribes with the nearby Yahooskin indigenous tribe. Following the Modoc-European conflicts, the Lava Beds National Monument was established in 1925 to preserve the area’s geological features, indigenous history, and historic battlefields connected to the Modoc War.

Today, the Lava Beds National Monument encompasses an area of more than 73 square miles and is preserved as a historic archaeological district on the National Register of Historic Places. The monument area preserves more than 700 caves, indigenous rock art sites, and battlefield grounds, along with a wide variety of lava flow features and natural geologic sites. The site integrates the area’s geological, cultural, and social history into an outdoor exhibit and recreational area, offering a variety of hiking and exploration opportunities for visitors.

A large variety of Modoc indigenous art is preserved throughout the site, including examples of both carved petroglyphs and painted pictographs. Archaeological dating on the site’s art traces back at least 6,000 years and may connect to imagery found at nearby Nightfire Island dating back 5,000 years. More than 5,000 individual carvings and art pieces are found throughout the monument’s area, representing one of the most extensive representations of American Indian rock art on the American West Coast.

A number of the monument’s caves are open to visitor exploration, with most caves located along a two-mile loop road near the park’s Visitor Center. The lighted Mushpot Cave, located adjacent to the Visitor Center, is the only lighted cave within the park, containing a variety of historical and natural exhibits. Less challenging caves include the Sentinel, Heppe, Big Painted, Symbol Bridge, and Paradise Alley caves, while more challenging caves include the Golden Dome, Indian Well, Lava Brook, Catacombs, and Thunderbolt caves. 13 hiking trails are also offered throughout the park, providing access to the area’s historical sites and geological features. Popular trails include the Captain Jack’s Stronghold Trail, which offers self-guided interpretive experiences, the Gillem Bluff Trail, which offers dramatic views of the area’s landscape, the Thomas-Wright Battlefield Trail, which preserves sites related to the Modoc War, and the Petroglyph Point Trail, which showcases a variety of indigenous art. Many trails enter or cross near backcountry areas, so visitors are advised to take necessary precautions regarding water and sunscreen and bicycles and pets are not permitted on trails.

A variety of educational programming is offered by the monument for young visitors, including a Junior Ranger Program that allows children ages 5-13 the opportunity to learn about the monument’s attractions and complete activities in exchange for participation badges. Curriculum-incorporated field trips are also offered for elementary and secondary student groups, and traveling trunk and guest speaker outreach programs bring learning materials directly into the classroom. Ranger-led tours of several of the monument’s cave are offered seasonally, including a three-hour Crystal Ice Cave tour during the winter months and a Fern Cave tour throughout the summer months. Public special event programming offered at the monument includes a Halloween Haunted Cave Tour, an annual Astronomy Day and Star Party event, and a Timeline Living History festival.

Where to Stay in Santa Barbara - 25 Best Romantic Getaways

Best Things to Do in Laguna Beach: Festival of Whales