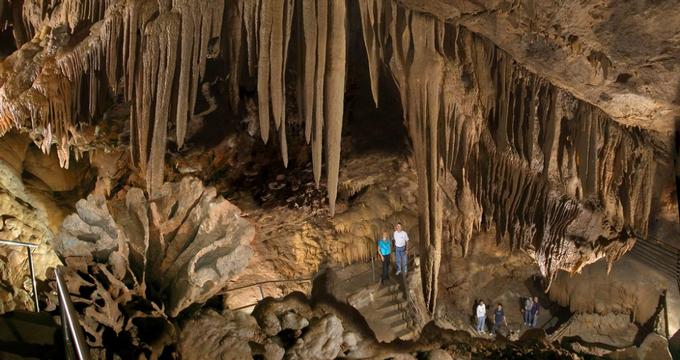 Lake Shasta Caverns National Natural Landmark invites visitors to come and explore the natural wonders of Lake Shasta and the surrounding area. The site is certainly a geological adventure that is fun for the entire family. Visitors can participate in a comprehensive and robust tour to explore the Lake Shasta Caverns, as well as Lake Shasta, in all of their glory. Along the adventure, guests may get a chance to catch a glimpse of some of the local wildlife, such as black bears, mountain lions, and bald eagles.

Lake Shasta Caverns National Natural Landmark is among three caverns known in Shasta County. The beds of the caverns date back approximately two hundred and fifty million years ago, back when the planet was affected by the folding of the earth’s crust. This is what ultimately formed the Klamath Mountains.

The Lake Shasta Caverns played a significant role in the lives of the Wintu Indians who once resided in the Lake Shasta area. During the 1870’s, a small town and a fish hatchery were constructed along the McCloud River, and the nearby cave was given the name Baird Cave. J.A. Richardson, an employee of the fish hatchery, discovered the caverns officially in the year 1878. The caverns have been open to the public as a natural area attraction since 1964. From the gravity defying helicities and very small cave coral to amazing cave drapery, the Lake Shasta Caverns National Natural Landmark offers quite a bit for visitors to see and enjoy.

A visit to Lake Shasta Caverns National Natural Landmark offers a fun and adventurous experience for visitors of all ages, making it a great attraction for the entire family to visit and explore. Guests to the area can take in the stunning underground natural formation and take a relaxing ride on the waters of the sparkling Lake Shasta during their visit. The Lake Shasta area as a whole offers plenty for visitors to do to spend an entire day enjoying the great outdoors.

The Sandy Creek Mining Sluice at Lake Shasta Caverns offers young spelunkers a chance to search for gemstone within the area’s own gemstone sluice box. The attraction offers guests a great way to find and identify various fossils and gemstones while they work in the trough. Some of the gemstones children may find at the Sandy Creek Mining Sluice include emeralds, moon stone, sapphire, ruby, peridot, and quartz.

The Rock Box offers young cavers an opportunity for a memorable adventure they’re sure to remember for years to come. The attraction includes a climbing wall measuring six feet, a treehouse made from oak, a climbing rock, and a tunnel. Other activities available around the Lake Shasta Caverns National Natural Landmark include catamaran rentals, which are a fun experience for groups of visitors. A relaxing boat ride on the waters of Lake Shasta is particularly enjoyable on warm summer evenings.

Visitors are welcome to bring a picnic lunch to enjoy along the lake in the site’s picnic area. The Snack Bar offers items like cold beverages and old-fashioned hot dogs. There is also a store where guests can pick up a souvenir before they leave.

More Things to Do in California