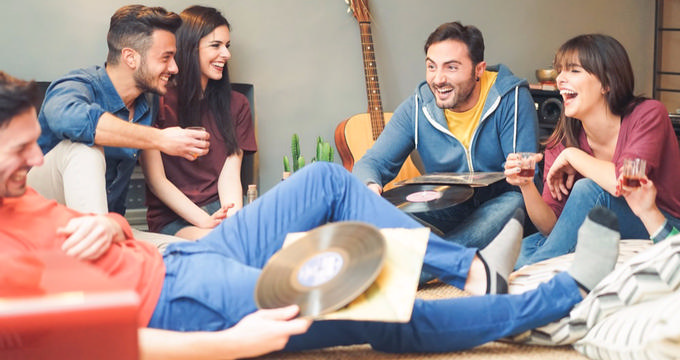 The home of the movies, Hollywood is one of the most famous places on Earth. It began life as a simple agricultural valley settlement and has blossomed into the home of motion pictures and the United States film industry. This Los Angeles neighborhood is situated in the central part of the city and was incorporated back in 1903. 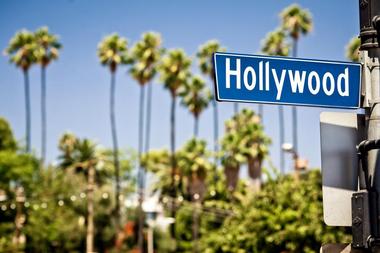 Before that, it was founded by H. J. Whitley, also known as the 'Father of Hollywood'. Whitley founded dozens of towns before and was in the LA area on his honeymoon in the late 19th century. According to his own reports, Whitley met a Chinese man in the area who said he was 'hauling wood', but pronounced it more like 'holly wood'.

Whitley liked the sound of that name and decided to use it to christen his newest settlement. He bought up close to 500 acres of land and the town started to grow from there, with Whitley helping Hollywood to prosper as he opened up the Hollywood Hotel and other buildings around the area.

With major motion picture companies setting up around Los Angeles in the early 1900s, Hollywood seemed like a great place for studios to form and start making movies. Thus, an iconic location in American history was born. In the years that followed, many major motion picture companies set themselves up in Hollywood and many incredible films were made there.

The area received its famous 'Hollywood' sign on the Hollywood Hills in 1923, with the sign originally reading 'Hollywoodland' but eventually having the '-land' part removed. In the years that followed, the Hollywood Walk of Fame was established and the area became synonymous with the movie industry.

Nowadays, it remains a hugely significant location for films and is a very popular touristic location as well, with key attractions like the Walk of Fame, movie studio tours, and the Hollywood sign drawing in legions of visitors from all over the world each and every year, as well as aspiring actors, screenwriters, directors, and other film fanatics looking to break into the industry.

If you're heading to Hollywood, you might want to stay at one of the area's hostels. These locations provide affordable accommodation and easy access to the main sites of interest, as well as typically offering additional amenities like free internet, breakfasts, and communal kitchens. Read on to learn all about a few of the best hostels in Hollywood. 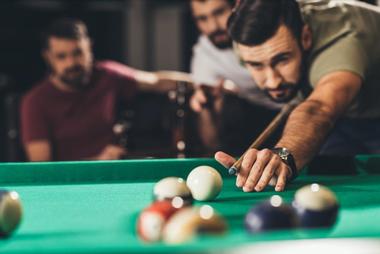 Located right in the heart of Hollywood, actually on the iconic Hollywood Boulevard itself, the Walk of Fame Hostel is one of the top spots to choose if you're looking to explore and experience all the magic of the movies. As the name of this hostel suggests, it's right by the Hollywood Walk of Fame, so you can go and admire the stars of countless famous celebrities, as well as visiting other key landmarks like the Chinese Theatre and even the nearby Universal Studios theme park, as well as various gift shops, Hollywood tours, restaurants and more.

The Walk of Fame Hostel provides low cost accommodation in either private rooms or shared dorms, depending on your preference, budget, and needs. All rooms are decorated with modern furnishings and neutral colors to give the hostel a chic, urban vibe. You'll also find some fun Hollywood imagery around this hostel, especially in areas like the communal lounge, shared kitchen, and game area with pool table. Guests at this hostel can also enjoy free breakfast each morning and free Wi-Fi for the full duration of their stay. 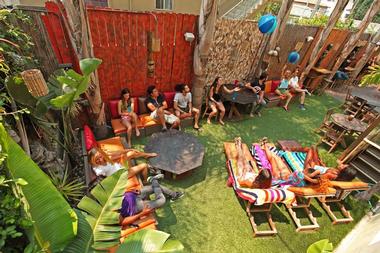 Another excellent hostel located right on Hollywood Boulevard, the charming Banana Bungalow is just a short walk away from the TCL Chinese Theatre and the Hollywood Walk of Fame, with the Hollywood sign clearly visible from down on the street and plenty of other fun things to see and do in the local area like gift shops, celebrity home tours, and bars. You might even spot a celebrity or two if you hang out in the local area, so this is a good hostel to choose to make some magical Hollywood memories.

The Banana Bungalow hostel is a highly rated location that features a Tiki-style vibe and decoration. You'll find palm trees, tiki umbrellas, colorful sun lounges, and lots of bright, bold patterns both inside and outside this hostel. It features its own private movie theater to enjoy with your buddies, as well as regular BBQ events in the terrace area. You'll also find free Wi-Fi and free breakfast at this Hollywood hostel. 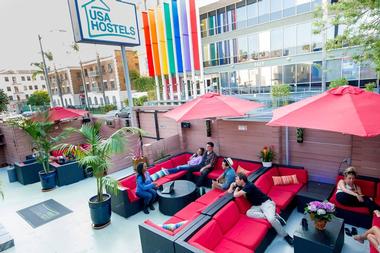 Another excellent Hollywood hostel to choose is USA Hostels Hollywood. Part of a leading hostel chain with locations all around California, USA Hostels Hollywood is situated on Schrader Boulevard, just a couple of blocks away from big locations and landmarks like the Chinese Theatre, the Walk of Fame, and more. It's a great spot for exploring Hollywood while also providing a surprisingly quiet setting for you and your fellow guests to get some good nights of sleep without any annoying interruptions.

USA Hostels Hollywood offers simple, clean rooms and dorms with good quality furnishings and stylish decoration, including plenty of fun Hollywood props and accessories like street signs and celebrity-focused artworks. You'll find that this hostel has a lot of personality, and the staff here are exceptionally friendly and helpful too, always eager to provide tips to help you get around and share the benefits of their experience and knowledge of the area. This hostel features its own gym, kitchen, patio, free breakfasts, a shuttle service down to the beach, and a huge TV lounge.