Half Moon Bay Fishing - Things to Do 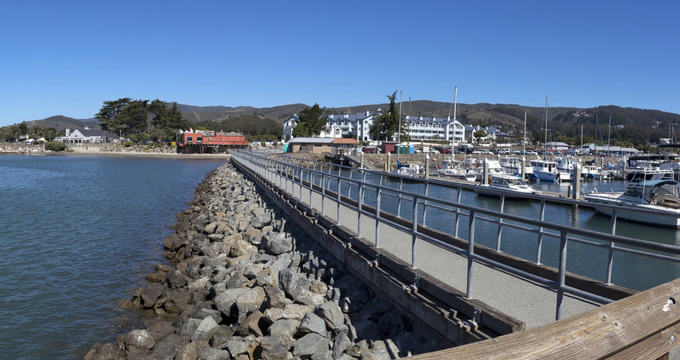 With a population of around 12,000 people, Half Moon Bay is only a small coastal city but is one of California's most picturesque spots. Boasting beautiful cliffs, stunning scenery, and several gorgeous beaches in Half Moon Bay itself and the local area, this is a great spot for tourists to enjoy. It's also a super location for fishing, with tuna, salmon, rockfish, and many other species often caught in the waters nearby.

Fish to Catch at Half Moon Bay

There are many different species of fish out in the Pacific Ocean off the coast of Half Moon Bay, but they aren’t all worth reeling in. Fishing enthusiasts in the area tend to focus on two key target fish:

King Salmon – The Half Moon Bay area is one of the best spots in California for king salmon fishing, with excellent reports from one year to the next. The waters in the area are particularly rich in all of the salmon's major food sources like krill and sardines, so the salmon tend to bite a lot around Half Moon Bay and can be relatively easy to catch in these waters. There's a two fish limit on king salmon fishing at Half Moon Bay and the minimum size limit is 24 inches. An average catch weighs 20-50 pounds but can reach over 100 pounds in certain cases.

Albacore – Also known as longfin tuna, these fish don’t always show up at Half Moon Bay but will sometimes be seen migrating into the area in the warm summer months. When the summer starts, many species of fish like albacore migrate north due to the changing temperatures of the water. Albacore are highly prized by fishing enthusiasts and are often a key target of summer sportfishing trips. An average albacore catch can weigh around 20-30 pounds, but much bigger examples can be caught now and then, and these fish are valued for their flesh.

Fishing Charters at Half Moon Bay

Captain Bob Ingles has been working on the water since the 60s and has more experience than almost any other captain or fisherman in the Half Moon Bay area. His vessel, the Queen of Hearts, is one of the biggest and most impressive boats at Pillar Point Harbor and offers both salmon fishing tours and light tackle rockfishing. All of these tours are highly suitable for families, and any youngsters will be warmly welcomed on board too. The Queen of Hearts also runs whale watching tours and offers some very competitive rates compared to other fishing charters at Half Moon Bay.

Mooch Better Fishing runs on a 37-foot vessel that carries groups of up to six people. These fishing charters run open-party trips and whole-boat charters, with key targets being tuna, salmon, and rock cod, as well as whale watching tours, birdwatching, ash scattering, and other services. The friendly crew will be too happy to welcome you aboard and provide all tackle and bait, as well as rod and reel rentals. The crew will also be happy to clean any catches you want to take home. The open-party tours are ideal for solo fishing enthusiasts or small groups who don't mind sharing the boat with potential new friends, while the whole-boat charters are better suited to families.

For some of the best sportfishing in Half Moon Bay, sign up for a tour with the New Captain Pete. Helmed by Captain Dennis Baxter, who has been sportfishing since the 80s, this vessel is 53 foot long and capable of carrying over 35 anglers. Equipped with state-of-the-art fish tracking equipment, the New Captain Pete can seek out large schools of fish with ease and give you the best chance of reeling in a big one. This charter exclusively focuses on sport fishing in deep waters for tuna, salmon, and other big game.

Malibu Kayak - Things to Do

25 of the World's Tallest Roller Coasters