Things to Do in Sacramento: California Museum 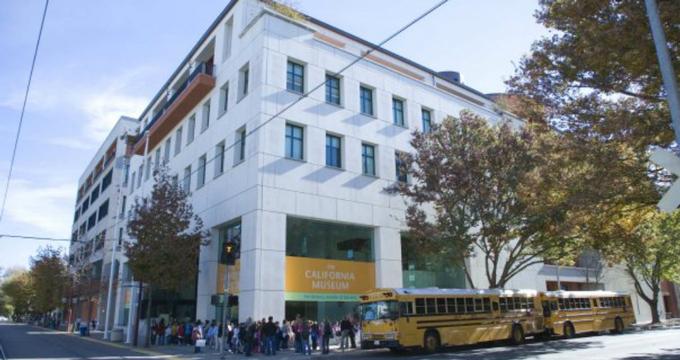 Located in Sacramento, California, the California Museum is the state’s official history museum and home to the California Hall of Fame. Initially developed by the Secretary of State’s office, the museum is managed and funded long-term by the nonprofit Public Benefit Corporation.

The California Museum, located inside downtown Sacramento’s State Archives Building, is the result of a unique partnership with the state government.Opened in 1998 under the name the Golden State Museum, the project’s original aim was to be a public repository for the California State Archives, but as a result of former First Lady Maria Shriver’s involvement with exhibits and fundraising beginning in 2003, it has become increasingly focused on giving nonpartisan representation to the stories of California’s underrepresented groups, including women and indigenous Americans.

Eight permanent exhibits are housed within the museum’s 20,000-square-foot exhibit space, along with space for rotating temporary exhibitions.

Established in 2006, the California Hall of Fame honors the state’s most remarkable citizens. Past inductees include icons such as Walt Disney, Betty White, Steve Jobs, and other legendary Californians from the worlds of business, science, education, arts and culture, and public service. The Hall of Fame serves as the museum’s flagship exhibit, showcasing a collection of personal artifacts belonging to past inductees to tell the story of their accomplishments. The annual induction gala also doubles as the museum’s main benefit evening, raising funds for yearly museum operations.

Many of the museum’s other exhibits highlight the state’s marginalized and underrepresented voices. On view since 2004, California’s Remarkable Women marks the beginning of Maria Shriver’s partnership with the museum. Presented in conjunction with California State Parks, the exhibit honors California women from all walks of life, including union leader Dolores Huerta, designer Ray Eames, and astronaut Sally Ride, and strives to inspire the accomplishments of future generations of female leaders through its message.

The landmark California Indians: Making A Difference is the only exhibit of its kind in the state to directly utilize Native American voices in telling the story of the region’s indigenous peoples. Developed in conjunction with a tribal advisory council, the exhibit includes 13 oral history recordings, along with artifacts representing more than 100 tribes from across the state. Of note in the collection is the Chipped Stone Bear, which serves as the state’s official prehistoric artifact, and an arrowhead and fur cape that belonged to Ishi, the state’s best-known Native figure.

Uprooted: Japanese Americans During WWII, the museum’s longest-running exhibit, documents the history of Japanese Americans in California, from immigration struggles through the state’s mass incarcerations and eventual reparations following Pearl Harbor. Multimedia interviews with internment camp survivors are highlighted, along with photographs and artifacts from Sacramento State’s Japanese American Archival Collection. Oral history is also at the center of the new We Are All Californians: Stories of Modern Immigration exhibit, which uses first-person narrative to explore the journeys of immigrants to the state from around the world. The exhibit is the first installation in conjunction with the museum’s upcoming California Unity Center project, a 4000-square-foot gallery space devoted to the state’s civil rights history and cultural diversity legacy.

Other ongoing exhibits include California Missions, which highlights the state’s colonial history with an exploration of early Spanish Catholic missionary outposts in the area, and Health Happens Here, an interactive multimedia exhibit that looks at health facts and initiatives throughout the state. Several art pieces also serve as standalone exhibits, including the state sesquicentennial California Heritage Quilt, a collaboration by more than 230 vignette artists, and the courtyard’s six-story Constitution Wall, which weaves script from California’s Constitution into the museum’s exterior, inviting viewers to reflect on the freedoms the document guarantees.

Reflecting the museum’s commitment to diversity and outreach, several educational programs aim to make resources available to all California students, including a field trip scholarship program which awards free structured tours to low-budget schools. Museum membership is also free to all primary and secondary educators in the state, and a Learning Advisory Council comprised of K-12 educators meets regularly to develop museum programming reflecting curriculum needs.

In addition to the Hall of Fame induction ceremony, the museum hosts a number of special events throughout the year, including many that highlight cultural holidays, such as the annual Día de Los Muertos Fiesta in October. Festivities include a traditional ceremonial blessing performed by Aztec dancers, a Market of the Dead, and face painting and art activities for children. Other events, including lectures, film presentations, and block parties, are presented in conjunction with exhibit openings.

More Things to Do in Sacramento