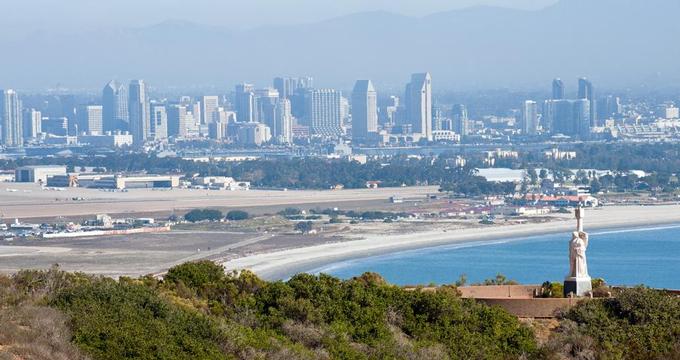 Cabrillo National Monument commemorates the landing of Juan Rodriquez Cabrillo on the West Coast of the United States. The park may be dedicated to telling the story of Cabrillo and his exploration of the West, but it is also home to many cultural and natural treasures.

Cabrillo National Monument is found within the beloved national park with the same name and is located in San Diego, California. The monument and the location for the statue of Cabrillo was initially dedicated in 1913 by President Woodrow Wilson and was merely half an acre. However, no statue was built, so in 1926, President Calvin Coolidge also made an attempt to erect a statue on the monument honoring Cabrillo, but was not successful either.

But, in 1935, a major renovation of the monument where the statue was meant to stand was completed. A new road was built leading to the monument and the nearby lighthouse, Old Loma Point Lighthouse, was also refurbished. This renovation generated a genuine feeling of hope that this monument could be realized. So in 1939, the Portuguese government commissioned a statue honoring Cabrillo as a gift to the United States, and it is still standing proudly today.

Cabrillo was one of the first Portuguese explores to make landfall in California. He arrived in the San Diego bay area in 1542 and discovered a diverse and thriving land with vast amounts of plants and animals. Through centuries of European growth and development, the environment has been altered greatly from his first landing, making the land that Cabrillo discovered one of the rarest ecosystems in the world.

During World War II, the monument was closed to the public and used as a military tactical point. However, in the years after the war, both President Eisenhower and President Ford enlarged the monument which is now currently over 140 acres. 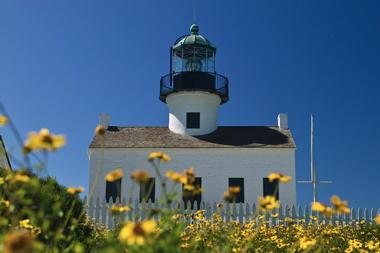 There are many unique and cultural spots to discover at Cabrillo National Monument including the Old Point Loma Lighthouse and the Cabrillo Statue. Visitors can also explore breath-taking nature amongst picturesque landscapes contained in the park. From rare plants and animals to intertidal beaches, Cabrillo offers something for every member of the family to enjoy.

One of the historical aspects of Cabrillo Monument is The Old Point Loma Lighthouse. The lighthouse was originally built in 1855 on top of a 400-foot cliff. In November of 1955, the lighthouse was lit for the first time and for over 30 years, it welcomed sailors into the San Diego Bay. But in 1891, the flame was extinguished permanently when a new lighthouse was built at a lower elevation. However, in celebration of the national park’s 130th birthday, the light was relit in 1984. Visitors can climb the spiral staircase to the top of the lighthouse and take in the breath-taking view from all around the monument.

One of the most popular historical sites at the Cabrillo Monument is the Cabrillo Statue. It is made of sandstone, stands at over 14 feet high, and weighs 14,000 pounds. It portrays the Portuguese explorer, Juan Rodriguez Cabrillo, who made landfall in California in the 16th century. The original statue was installed in the Cabrillo Monument in 1949 and due to rough weathering, a replica of the statue was made out of limestone to replace the old one in 1988.

The nature and wildlife found at the Cabrillo Monument is as unique as the monument’s history. The Rocky Intertidal Zone is one of the most popular parts of the Cabrillo, more than 215,000 people visit the Intertidal Zone each year. It lies on the southern side of the park and is more commonly known as the “tide pool area”. These tide pools are depressions formed over geologic time that trap water during low tides. During high tide, the depressions are completely submerged, but during low tide the depressions are exposed to plenty of sunlight and wind on the rocky reef. These depressions can produce rare ecosystems for marine life that are captivating for visitors of all ages.

The Cabrillo tide pools can provide an up close experience with rare marine plants and animals that many visitors might never have access to otherwise. They can explore and learn freely while enjoying the majestic sandstone cliffs and picturesque ocean. Fall and winter months are the best times to visit the tide pools when low tides occur earlier in the day. 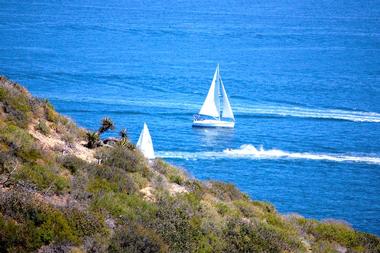 With the San Diego Bay on East and the Pacific Ocean on the West, visitors can see the scrubland habitat within Point Loma. Four different plant communities filled with a wide variety of plant species can be found on Point Loma: southern coastal bluff scrub, maritime succulent scrub, Diegan coastal sage scrub, and southern maritime chaparral. Visitors can receive a plant guide from the Cabrillo and explore both the native and invasive species that call Point Loma home.

Throughout the park, a wide variety of wild animals can be found, including all types of birds, reptiles, amphibians, mammals, and miscellaneous marine life. There are more than 346 species of birds documented at Point Loma and the Cabrillo Monument. It is considered a non-stop Pacific Flyway because of the sheer amount of birds that pass through during their migration. However, some species of birds call the Cabrillo a year-round home. In fact, some of the most significant breeding of the great blue heron and the red tail hawk can be found here.

The geology of the San Diego bay area is also very fascinating. Fossils dating at over 4 million years old have been found under the nearby Natural History Museum.

Some interesting environmental factors make the surrounding environment of Cabrillo National Monument even more unique. Because the Cabrillo experiences a Mediterranean climate zone, it has warm, dry summers, and cool, mild winters – making it ideal to visit the Cabrillo year-round. Certain plant species are allowed to thrive in this rare climate that may not usually thrive side-by-side. For example, the cactus and the evergreen tree are able to grow next to each other because the weather is typically so mild.

Whether visitors want to learn more about nature or history, or simply enjoy a relaxing day in the picturesque outdoors, the Cabrillo National Monument and its nearby treasures provide something for everyone to enjoy. 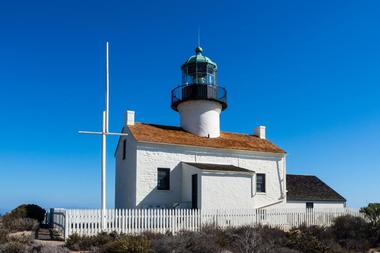 Cabrillo National Monument and its employees recommend planning your visit around the low tide times. This provides the best experience for visitors. It is also a trash-free and smoke-free park. The monument is located in the tourist hot spot, San Diego, California, so there is always plenty to see and do.

There is a visitor center nearby that provides a wealth of information for guests about Cabrillo National Monument and all of its historical and cultural surroundings. Souvenirs are available for purchase, a variety of educational films are available for viewing, and even park rangers are available to help answer any questions that guests might have.

Back to: Best Things to Do in San Diego.