The Lost City of Heracleion, Egypt 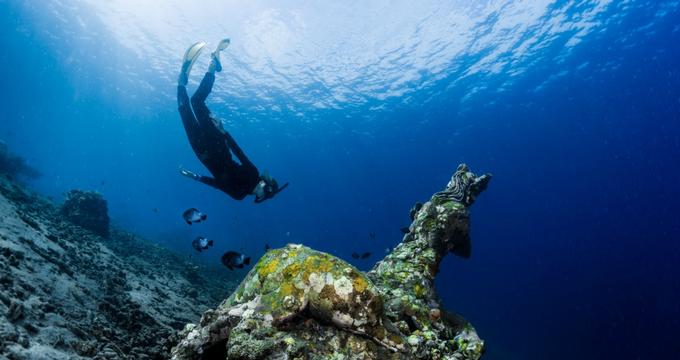 The treasures of ancient Egypt are visited by millions of tourists, either in person or through film or TV, and most people can identify the famous pyramids as the burial places of pharaohs, the ancient Egyptian kings. Thus, the discovery of an almost complete sunken city that had been lost to history, except for a few references in ancient texts, is really causing excitement within archaeological circles. This is like something from an Indiana Jones movie.

About 12 years ago, a French underwater archaeologist chanced upon some amazing, large statues in the bay of Aboukir, off the coast of Egypt opposite the Greek island of Crete. He had been looking for Napoleonic war ships that had been sunk during the 18th-century Battle of the Nile. Once he had uncovered the statues, an exploration team began to find an amazingly well-preserved sunken city about 150 feet below the surface of the Mediterranean. The sediment from the Nile delta had acted as a perfect preserving agent and as more of the city was uncovered, the researchers realized that this had been a major trading port between Egypt and the ancient civilizations based around the Mediterranean.

There were many ancient ships still beside the ancient docks and immediately this sunken city was recognized as one of the treasures of antiquity. They found so many statues dedicated to ancient Egyptian gods that researchers knew that a series of temples had to be located in the city. The biggest temple to be discovered is one dedicated to the god Amun-Gereb, the chief Egyptian deity at the time. There are also vast treasures from the ancient Greeks and the Phoenicians, such as gold and silver coins, ancient weights, and counting stones. This is because the temple would have been the center for import and export tax, and all the wealth from a busy trading port city would have been stored there.

Following vague references from an ancient Greek story about a great city on the Nile delta that was named after Hercules and visited by both Helen of Troy and her lover Paris and which had sunk mysteriously beneath the waves, the archaeologists realized they had in fact found that very city. The ancients had called it Thonis-Heracleion. They are still not completely sure what caused the city to sink so long ago, but the same sediment that has helped to keep it buried and preserved may also have been the cause. It was not a very secure footing to build upon.

Multiple channels were built for the ships to access the city, where many fine examples of trading ships have been found. To date, over 700 well-preserved anchors have been discovered. There are stone tablets with both Greek and Egyptian writing, all helping to make this discovery a feast for archaeologists. All of these finds have helped the researchers to build an amazing 3D image of the city as it was, and to realize the significance of the specific location of the city standing at the mouth of the “Sea of the Greeks,” as the ancient Egyptians referred to it.

They are still working under the sea to discover all they can about the Lost City of Heracleion.