Things to Do in Columbus: Ohio Statehouse 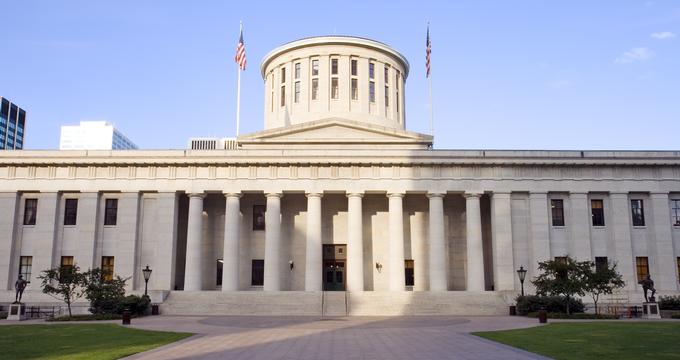 The Ohio Statehouse in Columbus is the seat of the government for the state of Ohio and is located on a 10-acre property on Capitol Square in Columbus. The Ohio General Assembly is housed in a beautiful Greek Revival building, as well as the ceremonial offices of the heads of state, such as the governor, treasurer, and auditor.

One of America's finest examples of Greek Revival architecture and one of the oldest working statehouses in the country, the Ohio Statehouse was completed in 1861 after 22 long years of construction. Restored to its former glory in 1996, the Statehouse features a sweeping grand staircase of modeled after the Paris Opera House and is filled with priceless amazing historical art, including a marble bust of Abraham Lincoln.

Unlike U.S. state capitol buildings, the Ohio Statehouse was designed and built before the U.S. Capitol and thus owes little to the design of the United States Capitol. Constructed out of Columbus limestone on the banks of the Scioto River, the Ohio Statehouse is built on 18-foot deep foundations, partly part by prisoners sentenced to hard labor and features a central recessed porch fronted with a colonnade of Greek Doric columns. Reflecting a definite influence from the Parthenon in Athens, a broad central pediment supports the cupola, also known as a windowed astylar drum, which contains an oculus that lights the interior rotunda, modeled off the Tholos of Delphi, a circular temple built about 360 BC.

Inside the building, the ceremonial offices of the Governor and other staff are located on the first floor, the Ohio General Assembly chambers can be found on the second floor, followed by the Atrium, which connects the Senate building with the Statehouse and hosts government functions, ceremonies and special events.

The Statehouse is home to an impressive collection of large-scale artworks around the property, including portraits that memorialize individuals and landscapes that depict events significant to the state or the nation. Renowned artworks include two magnificent paintings depicting the signing of the Treaty of Greenville by Howard Chandler Christy and a painting that honors Thomas Edison. A large marble bust of President Abraham Lincoln memorializing him and depicting the Union victory at Vicksburg can also be found here and was the only statue the President posed for in his lifetime.

Other artworks and sculptures around the grounds of the Ohio Statehouse a dedicated monument to the Ohio governor and U.S. President William McKinley, as well as almost 5,000 individual pieces of hand cut and fitted marble on the floor of the Statehouse Rotunda, which traces the development of the United States.

The Ohio Statehouse operates both as a working government building and as a museum with free daily tours, unique exhibits and other educational programs and activities for the public to enjoy, while at the same time, equipping them to become better citizens. Located on the ground floor of the Ohio Statehouse, the Ohio Statehouse Museum Education Center features interactive exhibits that challenge visitors' knowledge about the workings of state government and encourages them to take part in the processes of the state government by expressing their opinions, making decisions, comparing viewpoints and voting.

The Introduction Gallery is home to replicas of the original 1802 and 1851 versions of the Ohio Constitution and allows visitors to experience this essential historical document. The Gallery also encourages visitors to take a practical look at how the constitution directly affects the community by seeing how it has changed over time through an interactive process, as well as learning about the judicial branch of state government and Ohio’s state seal. Other prominent galleries within the Ohio Statehouse Museum Education Center include the Legislative Gallery, which is the floor of the Ohio General Assembly, the Executive Gallery, which features the ‘State of the State’ Exhibit, the Elections, and Voting Gallery, and the Making the Laws Gallery.

Back to: Best Things to Do in Columbus

Things to Do in Ohio: Stan Hywet Hall and Gardens