Things to Do in Baltimore, MD: National Aquarium 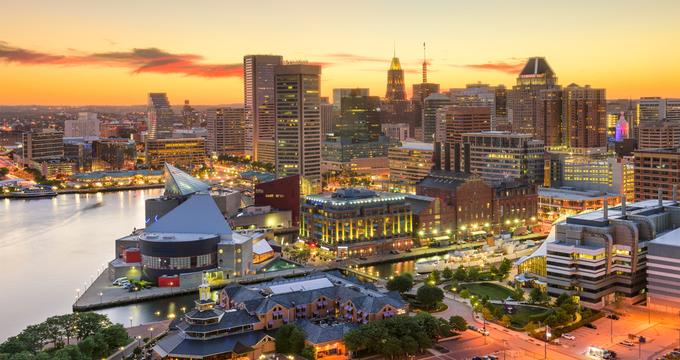 With more than 20,000 creatures that swim in the sea, fly through the air and crawl on the sand, the National Aquarium in Baltimore is teeming with life. Exhibits featured at the Aquarium cover the globe, bringing the World's oceans to downtown Baltimore. With a mission to inspire conservation of the world's aquatic treasures, the organization is a hub for activity for marine life, learning and leadership. Home to more than 600 species of animals, each visit to this vibrant venue is sure to be a unique and enjoyable experience. CDC information for travelers. Hours/availability may have changed. 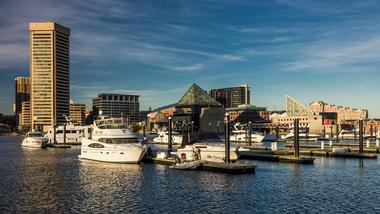 The origins of the National Aquarium date back to 1873, when the first National Aquarium was established. The Aquarium found its home in Washington, DC throughout the twentieth century and into the twenty-first century. During this time, the National Aquarium Baltimore, part of the city's redevelopment in the 1970s, opened in 1981. The two aquariums operated in parallel for many years, and in 2003, came together in an alliance.

This alliance created a working relationship and partnership between the two organizations, enabling them to improve both their collections of animals, as well as their educational impact. As of 2013, however, the National Aquarium DC closed its doors for renovations, and is in planning and fundraising processes. Patrons of the DC location and its animal need not shed a tear; many of the DC creatures were transferred to the nearby Baltimore location. The 20,000 animals that now make up the collection at the National Aquarium Baltimore are available for wonder and amazement throughout the year. 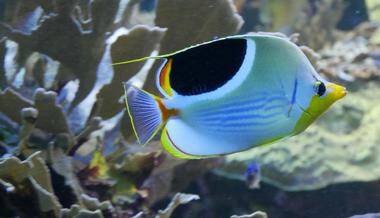 The exhibits that make up the National Aquarium feature a vast array of animal life. Vertebrates, invertebrates, mammals, fish, amphibians and more are all featured in striking and award winning exhibits. From Australia to the Atlantic and the Amazon, these exhibits take visitors on an underwater adventure around the world.

Transporting visitors to the wilds of South America, the Amazon River Forest exhibit features a variety of plant and animal species. The Amazon, home a third of the world's animal species, is a key habitat. The National Aquarium educates and enlightens all who enter about the animal life who live in this river environment. These animals include emerald tree boas, giant waxy tree frogs, white-blotched river stingrays and many more.

The enormous 335,000-gallon enclosure of the Atlantic Coral Reef exhibit is an impressive sight brimming with aquatic life. More than 500 species of fish can be seen in the enveloping encounter. The fabricated reef provides a backdrop for colorful and exotic fish to dart in and out, as if playing hide-and-seek with those who enter their watery world. Divers can be seen feeding these creatures, including the green moray eel and bonnethead shark, creating an even more interactive experience.

Go on a voyage from the one coast of the country to the other in the Atlantic to Pacific exhibit. With a variety of animals, from Atlantic sea-cliff dwelling puffins, to a Pacific coral reef, there is much to see. Visitors can get a preview of the vibrant underwater realm on the Aquarium's website via a live aquarium web cam.

This award winning exhibit takes its guests down under, to a northern Australian river gorge. This enclosure is the home of 1,800 animals representing 120 species, from snakes and turtles to flying foxes. Guests will want to be sure to see the Laughing Kookaburra, Australia's national symbol, and the Grey-headed flying fox, among many other fascinating animals in this exhibit.

You are reading "Things to Do in Baltimore, MD: National Aquarium" Back to Top

Things to do near me today, beaches with kids, romantic parks, unique places to visit in USA, tourist attractions: Weekend Getaways from Seattle, NC day trips, FL, Near Atlanta, AL 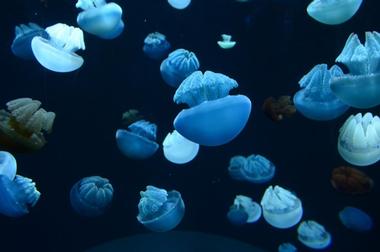 When most people think of reefs, they often imagine the Great Barrier Reef of Australia or the meso-American reef in the Atlantic off the coast of Central America. The world's oceans are home to many more than those, however, and the National Aquarium has a special exhibit devoted to just such a reef. Blacktip Reef, another award winning exhibit, is a recreation of an Indio-Pacific reef. This exhibit also has a live web cam, where aquarium enthusiasts can watch this lively exhibit any time they please. Animals here include clown triggerfish, emperor angelfish, harlequin tuskfish and many more.

The biggest enclosure of the Aquarium is home to some of its most entertaining inhabitants;:a colony of eight bottlenose dolphins. The social group, comprised of six female and two male dolphins, is a social group with complex relationships. Staff can frequently be viewed in the exhibit, caring for the animals, cleaning the area, or playing with the dolphins.

Showcasing an oft-overlooked but ever-present sea-creature, this exhibit is dedicated to jellyfish. Found in every ocean on the globe, and even some freshwater environments, the number, movement and activity of these creatures can be an indication of changing aquatic environments. With many species available for observation and education at the National Aquariums, visitors are sure to walk away with a better appreciation for these gelatinous creatures after gazing upon this illuminating exhibit.

For those who want to do more than gaze at exhibits, then a visit to the Living Seashore is a must during a trip to the National Aquarium. Two touch-pools provide opportunities for guests to reach out and touch the sea-life they have seen behind glass surfaces. With around 150 animals in the exhibit, there is ample opportunity to experience marine life in a new and interactive way. More than just animals, however, this exhibit also includes videos, games, tactile learning activities, and a Conservation Station where visitors can demonstrate their commitment to the coast by pledging to protect its habitats and animal inhabitants.

You are reading "Things to Do in Baltimore, MD: National Aquarium" Back to Top

Long weekend getaways with friends near you, weather, best small towns, what should I do in for couples, cheap, with friends, nearby, open now, tonight, affordable, fun things to do near me today: CO, From San Diego, VA, OH, WI, MI, IL, IL, VA, San Diego, TX 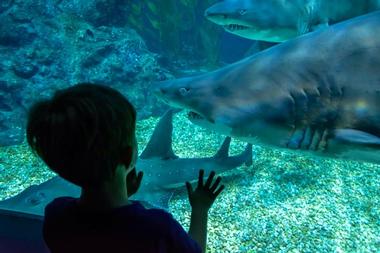 Bringing the learning a bit closer to home, the Maryland Experience exhibit highlights habitats and aquatic life in and around the state. Some animals in this exhibit include the American bullfrog, striped burrfish, diamondback terrapin turtle and many more. Highlighting the biodiversity found right in the Aquarium's own back yard, this exhibit takes visitors from mountain streams all the way to the continental shelf of the Atlantic Ocean.

Mysterious, notorious and ever-captivating, sharks are a favorite of aquarium visitors. With a 225,000 gallon, ring shaped enclosure featuring several species of sharks, the National Aquarium does not disappoint. The unique, circular exhibit design allows the animals to circle the visitors, enhancing the experience of the exhibit and the fascination with these predatory animals.

As the world's oceans feature a sometimes harsh and inhospitable environment, marine life has had to adapt to survive. The Surviving Adaptation exhibit at the National Aquarium pays homage to evolutionary phenomena, highlighting several unique and fascinating animal adaptations. Creatures in this exhibit include the electric eel, giant Pacific octopus, longsnout seahorse, peacock mantis shrimp and more.

This exhibit showcases animals from an endangered and disappearing habitat. More than just aquatic life, this enclosure is also home to number of land animals, as well. Visitors will want to be sure to see the Line's two-toed sloth, golden lion tamarin monkey, and blue poison-dart frog, among many other jungle dwellers.

You are reading "Things to Do in Baltimore, MD: National Aquarium this Weekend with Friends" Back to Top or More places to see near me today, Weekend trips

Nearest romantic getaways today at night, places near me, local wedding venues, best small beach town, restaurants, when you are bored, outside, things to do with kids near me, staycation, how do I plan: NC beaches, Ft Lauderdale, Day trips from NYC, From Chicago, PA, CT, CA, Hilton Head, Castles in Texas, GA beaches

5.The Waterfront Park and Conservation 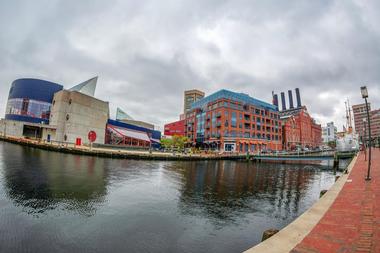 
The National Aquarium is more than just its exhibits, however. The 90,000 square foot Harry and Jeanette Weinberg Waterfront Park is a great way to enhance a visit to the Aquarium. Not just your average park with shrubs, swing-sets and picnic tables, the Waterfront Park is a Certified Wildlife Habitat. As educational as it is inviting, this area, situated along the Chesapeake Bay estuary, helps to promote conservation of this important natural habitat.

Conservation is a key component of the work undertaken by the National Aquarium. These efforts include animal rescue operations, which have returned more than 100 animals to the wild, as well as creating educational resources and opportunities to protect animals and their habitats. These include lecture series, habitat restoration days, and consumer education on smart seafood choices. All of these efforts work to preserve the natural environment for the future.

You are reading "Things to Do in Baltimore, MD: National Aquarium this Weekend" Back to Top or More places of interest in, Things to do near me

Where should I go this weekend for fun, adventurous places to visit near me today, famous for, kid friendly, what can you do in for free, affordable biggest cities, sea vacation, natural wonders: FL, CA, Myrtle Beach, OR, New England weekend, Charlotte, Williamsburg, LA, PA 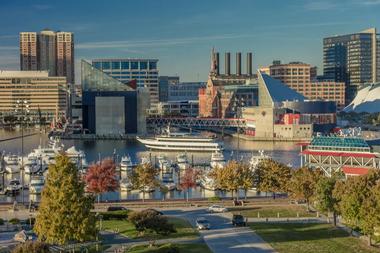 
Education helps to further these conservation efforts, which often start with the youngest among us. The National Aquarium is working to educate tomorrow's leaders on the importance of conservation today through field trips, student programs, volunteer opportunities, the Youth Ocean Conservation Summit and more. In addition, the organization works to educate the educators, with abundance resources for teachers, including workshops, orientations, and outreach programs. These outreach efforts include traveling programs, bringing the Aquarium to the classroom for interactive and engaging learning activities.

In order to have the best and most engaging experience at the National Aquarium, visitors can download the Aquarium App prior to arrival, which includes keeper times, maps and more. The Aquarium advises visiting prior to 11am or after 3pm most days for a more enjoyable experience with fewer crowds. Located in downtown Baltimore, the Aquarium is easily accessible from freeways and public transit. Public parking is available in close proximity, for a fee. For the optimum experience, it is recommended to review the calendar of events on the Aquarium's website prior to planning your visit. Visitor tips, also available online, help to ensure guests make the most of their visit.

In addition to the abundance of permanent exhibits on display to discover and dive into, the National Aquarium also feature a range of events to enhance every visit. From daily offerings like animal feedings and 4D Immersion films, to festivals and glittering gastronomic gatherings, there is something for kids, adults, students, teachers and everyone in between. The Aquarium also offers deals, half price nights, and special programming for special needs guests. For those seeking an even more in-depth aquarium experience, Immersion Tours take guests behind the scenes, get them the inside scoop, and show them the amazing animal care at the aquarium. Visitors can choose one of these three tours available on specific days and times throughout the month, and are advised to book in advance.

Back to: Best Things to Do in Baltimore, Maryland

You are reading "Things to Do in Baltimore, MD: National Aquarium" Back to Top or More must do for couples, places to visit this weekend

Where can I go for top-rated things to see near me, fun things to do today, with toddler, social distancing, places near me, beach and last minute resort ideas for couples: Denver, Sanibel Island, Boca Raton, Louisville, CA, Virginia Beach, San Antonio, AZ

Things to Do in Baltimore, MD: National Aquarium

You are reading "Things to Do in Baltimore, MD: National Aquarium " Back to Top

12 Best Things to Do in Easton, MD

25 Best Baltimore Hotels and Inns for a Romantic Getaway