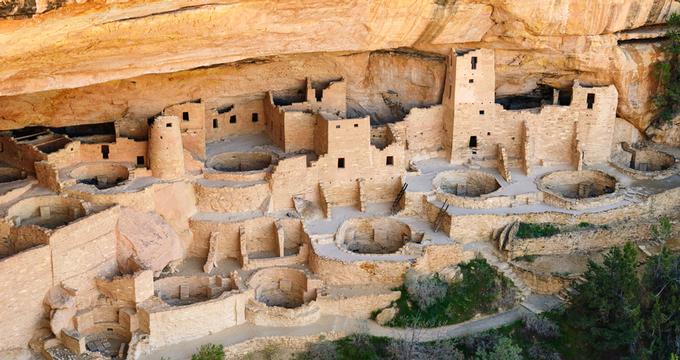 One of America’s richest repositories of archaeological wonders, Mesa Verde National Park was the home of choice for the ancient Pueblo people for some 700 years, from about 550AD. Their culture was sophisticated and their lifestyle replete with mysteries and surprisingly advanced innovations, including sunken living rooms, an air deflector for the fire (an early understanding of the need for a chimney), and beautifully painted pottery. In about 1200 AD, they moved away, and were decimated as they integrated into other cultures, but they left behind them relics of their rich and complicated lives. Mesa Verde, which in Spanish is Green Table, is today a protected National Park, ratified and created as such in 1906. More Fun Things to Do in Colorado 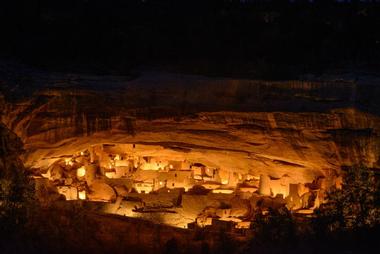 It was in 1765 that explorers from New Mexico first discovered this extraordinary area, but only nearly 100 years later, did the name become formalized. A mesa is an elevated piece of land, with a flat top and sides, much like a vast table made of stone, but it less the green table element of the area than the architectural ruins, built into the sides of the mesa that are a source of much fascination to curious visitors and professional researchers alike. From far, as you approach the park, you will see the thick and verdant forests of juniper and piñon trees which have been growing on the top of the mesa for literally millenia, and you will appreciate how the area’s name was coined.

Nomadic people known collectively as the Pueblo, comprising at least 26 different cultural communities, initially make homes by digging into the cliff walls on the sides of the mesa. These people are understood to have been subsistence farmers and hunters who lived of the spoils of the land and farmed vegetables such as squash, corn and beans. They were also thought to be semi-nomadic, but over time, they digressed from their semi-permanent caves and began to construct the hauntingly beautiful architecture, which still stands today.

The area was first photographed by a pioneer photographer called William Henry Jackson, in 1875, and effectively this made the idiosyncrasies of this area known to the world. Photography was at that time a brand new technology and Jackson arguably become one of the world’s first documentary landscape photographers, as a result of this.

Different aspects of Mesa Verde bear different names, that is about pinpointing sites which explorers have discovered over the years, rather than describing their value or origins. The Two Story house was one of the ones discovered and photographed by Jackson, but there are many more, including Sixteen Window House, Balcony House, Spruce Tree House and Square Tower House, among others.

It was already in 1886, with a rise of vandals in the area that the idea was coined that the place somehow must be protected by the state. People were pillaging the area for the objects that they were able to find there and sell to private individuals. The situation became quite extreme, with parts of walls being demolished for the cave art that was there. Eventually, along those lines, a local ranger by the name of Richard Wetherill began collecting archaeological specimens from the area which he sold to the Colorado Historical Society, for safe-keeping.

But it was not only artifacts that enthralled Wetherill and his brother-in-law Charles Mason, they were both overwhelmed by the exploration possibilities in this magical space. During the 1880s, they meticulously counted and documented 182 cliff dwellings in the region.

In 1891, spurred on by the field work which had been conducted on an informal basis by Wetherill and Mason, the first trained scientist to visit the area was Sweden’s Baron Gustaf E A Nordensköld, who was a trained mineralogist. He spent considerable time drawing, photographing and excavating parts of the area. Some 600 objects which he found there are still, today, housed in the National Museum of Helsinki, in Finland, and the momentum for the push to make Mesa Verde a national monument began. Many researchers have subsequently visited the area, and artifacts originating from it are housed in prestigious museums all over the world. The bid to form a bill to protect the region was rejected in 1901, but in 1906, the bill was passed and it was signed by President Roosevelt.

Effectively what this bill meant was that it became a federal crime to destroy or vandalize any historic or pre-historic architecture or object found in the area. By 1908, the area was being marketed as a park for the public to visit.

And so it developed. In the 1930s, to combat the dire realities of the Depression, Roosevelt instituted Civil Conservation Corps under the aegis of the New Deal Project, and Mesa Verde was one of the areas that benefited from this. Young able-bodied but unemployed men and women were consigned to build trails and roads, set up exhibitions, develop technology and generally make an unsophisticated and hostile area of vast history, pre-history and nature into something that was accessible and user-friendly to society.

In 1978 Mesa Verde National Park was deemed a National Heritage Site by Unesco. Consisting of the massive Wetherill Mesa Archaeological Project, the park brings together all the best elements of research and informal education that any self-respecting national park should. When it celebrated its official centenary in 2006, it did so with the dignified private reburial of the contents of numerous graves that had been upset in the excavation processes. 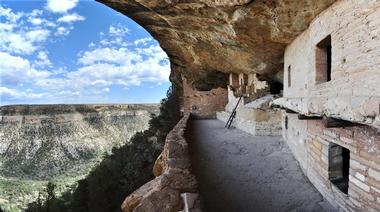 As you enter the park, you will encounter its Visitor and Research Center which was refurbished in 2012. This is the facility where you will find all that you need to make your trip as exciting, safe and informed as possible and it is also here where you can buy tickets to the tours offered in the park, including amazing walking expeditions through Balcony House, Cliff Palace and Long House.

Another must-visit facility in Mesa Verde is the Chapin Mesa Archaeological Museum, where you will see films and explanations about the lives and times of the ancient former inhabitants of this land, as well as display cases containing some of the most extraordinary artifacts found in the area over the years.

But unquestionably the highlight of your trip to this park will be the visits you pay to the cliff dwellings themselves. While some of these visits are handled under the guidance of a ranger, there are self-navigable tours as well, at different times of the year. Spruce Tree House is unfortunately closed at the moment, as it is not safe for public use, due to the danger of rock falls.

Mesa Verde is used as the site of an artists’ residency program and a writers’ retreat. For ordinary members of the public, there are hiking and exploratory trails as well as evening courses, which focus on a variety of activities, from twilight photography to listening to fireside tales.

But winter in Colorado is no small matter, and there are specially designed winter programs, which you can enjoy, which include cross country skiing and snow-shoe trails, each designed to give you a completely different insight into the area when it is under the smooth white and chilly blanket of snow. 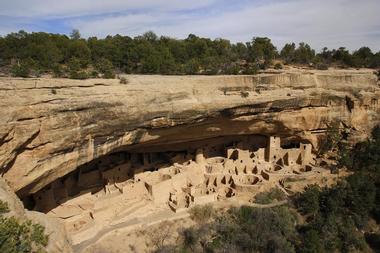 The Mesa Verde is open all year long, but due to changing weather patterns, the times vary, so it’s a wise suggestion that you consult the park’s timetables before you arrive. As an initiative to encourage visitors, the park’s entrance fees are waived on ten days during the year.

There are several different types of accommodation in Mesa Verde including the Far View Lodge, which promises views as its name suggests, and in terms of all amenities, it’s as good as it gets. There are also camping facilities in the area and four conveniently located restaurants.

When you go on a trail that involves an archaeological ruin, your own good judgment with regard to your fitness levels is important to consider. Many of these trails will take you to an altitude of over 7,000 feet, and there is a lot of steep walking involved in reaching all of the most fascinating places. You don’t want to hold up the rest of the group, or hurt yourself in trying to keep up with everyone else.

On your visit, be very careful of the roads in this park. They are often very narrow and with hairpin bends at high altitude, you must ensure that you obey all the rules, including speed. If you’re cycling on these roads, bear in mind that there are no dedicated cycling lanes and that you are forbidden from bringing your bike onto pedestrian lanes.

While all the precautions surrounding being in the natural world apply, with regard to everything from wild animals to remaining safe in extreme weather, keep a strong look out for the potential perils of lightning in this area. The safest place to be in an electric storm is in a building or in your car.

More Things to Do in Colorado

Best Things to Do in Colorado: Local Table Tours

Things to Do in Colorado: Pikes Peak