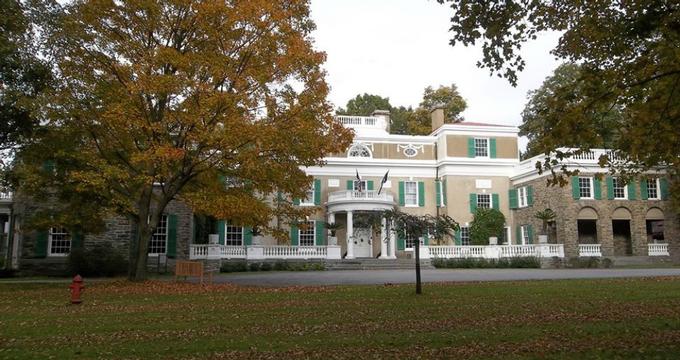 The history of Springwood dates back to 1697 when the English Crown granted nine New York businessmen 220 square miles of land. In order to give each partner an equal amount of land, the entire chunk of land was dived into nine lots. One of these lots was Springwood, and was given to William Creed. Other than the origins of how Springwood was initially purchased, there is little to no information about what was initially built on the lot.

It wasn’t until 1845 when Josiah Wheeler purchased the estate and remodeled it into an Italian-styled tower. Almost twenty years later, the estate only had one square mile. This square mile was purchased by James Roosevelt. One of the reasons why James purchased the property was because it had a stable and track for horses (James was passionate about breeding horses). From 1866 to 1900, James made many renovations to the home that still stand today.

Franklin D. Roosevelt was born in the master bedroom of the home in 1882. Springwood was extremely influential and significant throughout Franklin’s entire career and life. Somehow, Franklin always found a way back home. He even moved back to the estate with his wife Eleanor, in 1905 to accompany his mother Sara.

One last major renovation happened to Springwood in 1915. Franklin and Sara designed a few home additions that would accommodate Franklin’s increasing family and serve as the perfect place for entertaining political acquaintances. In March 1945, Franklin returned to Springwood for the last time. Two weeks after his trip, Franklin passed away. Franklin was buried in the Rose Garden, as well as his wife in 1962 and their two dogs.

Prior to Franklin’s death, he donated Springwood to the public with the sole condition his family could use the property if they wanted to. On November 21, 1945, Franklin’s family relinquished their rights to the estate, and allowed the estate to be owned and controlled by the National Park Service. Currently, Springwood is a National Historic Site and is open to everyone.

· Entrance Hall is the grand entrance where a collection of art work that Franklin collected throughout his lifetime is displayed. Visitors can also view a few artifacts from Franklin’s early life, as well as the trunk elevator.

· Living Room and Library has a comprehensive collection of over 10,000 volumes, thousands of pieces of art, over 500 specimens and models, millions of stamps, and thousands of coins and campaign memorabilia, which are all from Franklin’s private collection.

· Music Room is also often regarded as the Dresden Room. Many of the Chinese porcelain and lacquerware that were collected by Franklin’s mother are displayed here. Other notable elements of this room include the piano and photographs with autographs of various celebrities who visited Springwood.

· Bedrooms include the rooms used by Eleanor, Franklin, and his mother Sara.

If visitors check out the Henry A. Wallace Visitor and Education Center, they can learn a little bit of background information about Springwood, as well as watch an introduction video about Franklin D. Roosevelt titled, A Rendezvous with History. In addition to visiting the Henry A. Wallace Visitor and Education Center, visitors can participate in a guided tour. The guided tours available at the Home of Franklin D. Roosevelt allow visitors to get a behind the scenes look at Springwood and an in-depth lesson about Franklin’s life.

For more information about the educational opportunities at the Home of Franklin D. Roosevelt, check out their official website.

Things to Do in Queens, New York: Queens Zoo

Things to Do in Brooklyn, NY: Prospect Park Zoo