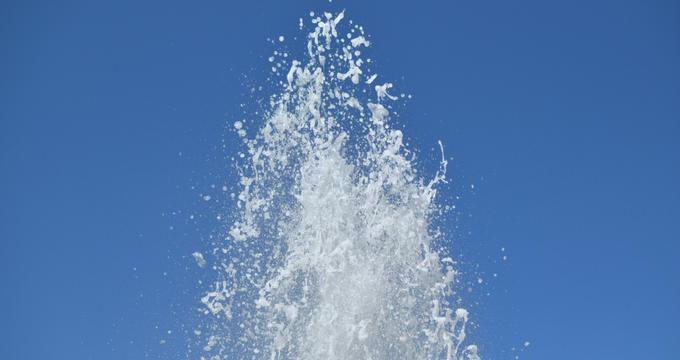 This is definitely one of the least-known, must-see attractions in Nevada. The reason for this could be that it is hidden away on private land in the Hualapai Geothermal Flats, near the Black Rock Desert in Washoe County. There is no direct access to the geyser at the moment, so in order to get a look at the spectacular sight that is the Fly Ranch Geyser (commonly known as the Fly Geyser), stop at a viewpoint on State Route 34. Although it is set back from the road by about a third of a mile, this does nothing to distract the eye from the impact. From this viewpoint, you find yourself staring out over an alien landscape full of pools and rock formations dominated by a multicolored cone.

From the mouth of the cone this spectacular geyser gushes out water up to a height of 5 feet, which can easily be seen from the distance. Just as with other more famous geysers, it may appear to be one of those wonderful displays of natural geothermic activity that occur all over the planet, such as at Yellowstone National Park. However, in this case you would be wrong, as Fly Geyser has not always been there.

This wonderful and unearthly landscape is an accidental phenomenon that happened when ranchers needed to dig a well in the early 1900s. Shortly after the well was drilled, it was noticed that, very slowly, water heated by the Earth’s crust began to seep up through cracks in the well and rise to the surface. Although attempts were made to cap the geyser, these were unsuccessful and soon there was no stopping the super-heated water from spilling out onto the land.

Slowly, over the years the minerals in the water were deposited and have caused a brightly colored mound to form, known as a travertine mound. Seen today, the mound, with bright red and yellow markings and steaming water spewing from the top, look like something you would see in science fiction films set on other planets. Added to the stark surroundings of the nearby reservoir and other nearby geothermic geysers and cones, this area displays an ethereal and visually stimulating vista.

The bright colors on the mound and in the pools are due to the algae that thrive in the heated water. The mound itself forms a funnel from which the hot water spews and, depending on the deposits, the angle can change. The water has then formed pools which eventually overflow and have a terracing effect. All of this geothermic activity has caused further changes to the landscape. This feature now covers an area of about 74 acres.

The terribly cool, or hot, (and secret) attraction is the Fly Geyser.

Best Things to Do in Las Vegas, Nevada: The Mob Museum