Things to Do in Omaha, Nebraska: Durham Museum 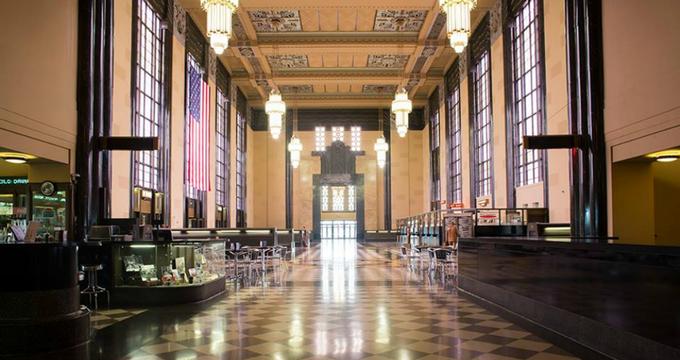 Located in Omaha, Nebraska, the Durham Museum is a social history museum dedicated to preserving the science, industry, and culture of the American Great Plains area through a variety of hands-on exhibits.

The museum is housed inside the historic Union Station building, making it notable both for its collections and its historic architecture. The 124,000-square-foot station was opened on January 15, 1931, after the commission of the Union Pacific Railroad as part of the Pacific Railway Act. At its peak, it served more than 10,000 passengers a day, but the advent of national interstate highway networks in the 1950s and 1960s caused a significant drop in the traffic of commercial railroads like the Union Pacific. As a result, the consolidation of remaining railroad lines into the government-funded National Railroad Passenger Corporation, now known as Amtrak, led to the demise of Union Station in 1971.

Original talk of demolishing the building was overturned by public support for preserving it as a landmark by housing a museum inside it. The Union Pacific Corporation donated the station to the city of Omaha in 1973, and after more volunteer-run community lobbying, it became the permanent home of the Western Heritage Museum two years later. After donations by Charles and Margre Durham allowed major renovations to be completed on the facility in the 1990s, the museum was renamed in their honor. Today, it is a partner institution of the Smithsonian Institution, the National Archives, and the Library of Congress.

The museum’s permanent collection is home to a vast array of historical objects and archival media that showcases the history of the greater Omaha area and the Great Plains and West regions. Areas of collection include the Adah and Leon Miller Foundation Library, which houses thousands of books about the railroad and cultural history of the region, an Archival Materials Collection housing documentation related to important historical events in the region, a Photo Archive with more than one million photographs, and a Historic Objects Collection featuring rare historic lifestyle memorabilia. The Byron Reed Collection, donated by real estate agent Byron Reed, contains more than 10,000 objects compiled in the late 19th century. Highlights of the collection, such as a treasures cabinet that holds Reed’s specimen of the 1804 Dollar, are featured in a gallery at the museum.

Permanent exhibits on Omaha’s history and culture are housed throughout the Union Station building, including several rooms of the station building which serve as exhibits in themselves, such as the Suzanne and Walter Scott Great Hall, the former waiting room of the railway station. The 160-by-72-foot hall has been restored to its original Art Deco style, featuring a plaster ceiling with gold and silver detail, a patterned terrazzo floor, six 13-foot chandeliers, and 10 cathedral-style plate glass windows. Bronze statues by Omaha sculptor John Lajba simulate passengers socializing in the hall while waiting on trains. Nearby, the Mutual of Omaha Theater shows short films on the history and development of the area dating back to the mid-1800s to give visitors an introduction before exploring the museum’s galleries.

True to the museum’s location, railroad history is a focus of several exhibits, including the Concourse Gallery, which details the history of passenger travel in Omaha from the construction of the Transcontinental Railroad through the heyday of the Union Pacific. Visitors young and old alike can enjoy the Model Trains interactive exhibit, featuring an O-scale layout of Union Pacific’s main line in the 1950s. At the Trish and Dick Davidson Gallery, several climb-aboard train cars are docked at Track #1, including a Union Pacific 1202 Pullman car, a Southern Pacific 2986 Lounge Car, and a Pullman Cornhusker Club Observation Car. Other historic exhibits in the gallery include an Omaha and Council Bluffs Railway and Bridge Company Streetcar, a Bekins Moving & Storage 1922 Mack flatbed truck, and replica facades of the Kimmel Orchard and Buffett Grocery Store.

Several exhibits illustrate the lives and culture of historic Nebraskans. The Baright Home and Family Gallery showcases walkthrough reproductions of historic Omaha homes, from the rawhide teepees of the area’s Native Americans to a full-scale turn-of-the-century worker’s cottage. The Bishop Clarkson Community Gallery focuses on the early history of the Omaha community, detailing the stories of Omaha’s first immigrant families and displaying memorabilia from local institutions such as the Bishop Clarkson Hospital, St. Cecilia’s Cathedral, and The Brandeis Building.

The area’s industry and ingenuity is showcased in the Trans-Mississippi Exposition Gallery, chronicling the 1899 Trans-Mississippi and International Exposition, which lasted five months and drew more than 2.6 million international visitors. The Omaha at Work Gallery celebrates modern Nebraskan entrepreneurs and businesspeople of note, and the Lives of Tradition Series highlights Plains ranchers and farmers, showing the traditions of their trades and how they have adapted to new technologies throughout the years.

In addition to guided school tours, the Durham Museum’s digital learning initiative brings Omaha’s history directly to classrooms with themed virtual field trips, including Virtual Vault trips through the museum’s permanent collections. The Adah and Leon Miller Foundation Library is open to students and researchers by appointment, providing further opportunity to explore the permanent collection. For adult visitors, the River City History Tours program offers a variety of themed driving experiences throughout the city aboard Ollie the Trolley, including brewery tours and trips to view the city’s historic mansions.

More Things to Do in Omaha

Things to Do in Charleston, SC: Magnolia Plantation and Gardens