Things to Do in Texas: Dallas World Aquarium 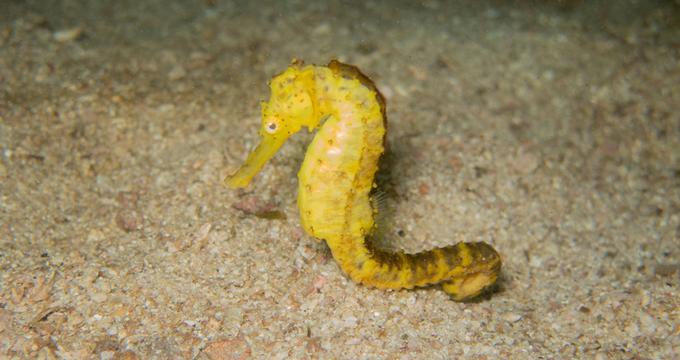 In the heart of downtown Dallas, Texas, in the city’s West End Historic District, one block is dominated by a number of old warehouses made new. Each of these warehouses is home to its own strange and out of place climate. In one, there blooms a tropical rainforest, another is filled with seawater, and yet another with fresh water. This is the Dallas World Aquarium, and there is nothing like it for a thousand miles around.

The aquarium aims to aid conservation efforts by housing a variety of both endangered and threatened animal species and cooperating with other zoos and organizations from all around the world in an effort to rekindle these populations. 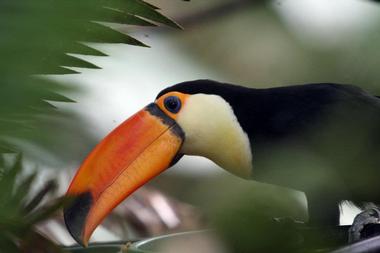 The Dallas World Aquarium first opened in 1992 after purchasing a historic warehouse and completely renovating the large space, with nearly a dozen aquarium tanks and an under aquarium tunnel. Not long after that, in 1997, the aquarium expanded into an adjacent warehouse, which was converted from a defunct rubber mill into a South American rainforest, complete with a canopy filled with bird and monkeys, and marked the occasion with its renowned exhibit, “Orinoco: Secrets of the River.” Then only years later in 2000, the aquarium purchased and developed a neighboring vacant lot, building another giant exhibition space this time filled with plants and animals from Mexico’s Yucatan Peninsula, and installing in it a gargantuan walk-through aquarium tank. The exhibit opened to the public in 2004. 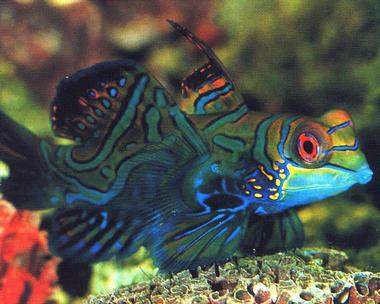 The aquarium’s Borneo exhibit is the first thing visitors see when coming to the facility. Even before they reach the admissions booth, guests can observe a stunning variety of animals form the other side of the world, including the giant beaked Shoebill stork, who with a cement grey coat and paddle bill, looks like an irreverent gargoyle. Blue penguins also feature in this section, along with cockatoos, crowned pigeons, hornbills, and even an animal know as a tree kangaroo. Visitors will be delighted by the odd collection of birds, fish and mammals from throughout Australia and the Asia archipelagos.

Back to Best Things to Do in Dallas, Weekend Getaways from Dallas and Day Trips from Dallas

Once visitors have entered the main area of the Dallas World Aquarium, they will come to one of the centerpiece exhibits. The Mundo Maya exhibit is eight stories of plants, animals and Mayan folklore, all centered on the walk-through aquarium: a 400,000 gallon collection of sea turtles, sharks and rays from the Yucatan Peninsula. Owls, eagles, and even flamingoes roam freely in and around the canopy, while in the lower depths turtles, frogs, snakes, and even crocodiles lurk in the water.

The Orinoco: Secrets of the River exhibit occupies seven full stories of the newest building on the aquarium campus and recreates with impressive and obsessive attention to detail a South American rainforest, specifically that of the Orinoco river basin in Venezuela and Columbia. Parrots, toucans, cuckoos and even a cock-of-the-rock are among the amazing collection of bird that flit about this rainforest canopy above a floor level menagerie of frogs, boas, monkeys and even sloths. 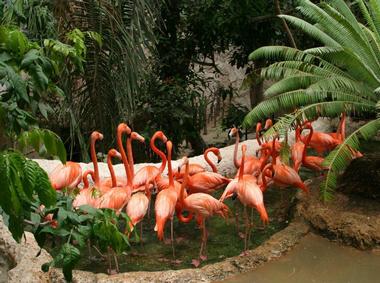 The aquarium gallery aims to recreate the natural habitat and ecosystems that develop around- coral reef and kelp forests. It includes recreations of these environments and a large, 20,000-gallon aquarium with an observation tunnel that features a massive variety of fish, marine life and other creatures from the Indian and Pacific Oceans. Visitors will find on display here a unique array of sea life, including living coral specimens, angelfish, shrimp, seahorses, sea dragons, anglerfish, anemone, and the clownfish made familiar by Pixar Animation’s massively successful movie “Finding Nemo.”

The Dallas World Aquarium features a sprawling outdoor exhibit where it houses its own year round exhibit of wildlife from South Africa. This area offers visitors a unique opportunity to observe animals such as shoebill storks and even black-footed penguins. During the summer months, the aquarium adds to the display a number of amphibians, reptiles, and other creatures from the island of Madagascar. Other unique animals in the exhibit include tomato frogs, turtles, tortoises, geckos, chameleons, with bird species including turacos and pigeons in addition to the penguins. 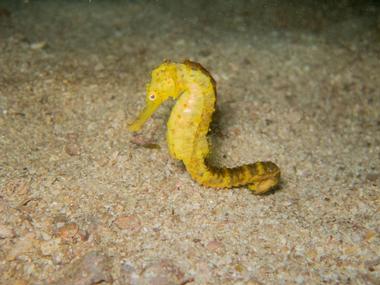 The Dallas World Aquarium offers a number of programming options for guests to learn about the wildlife and ecosystems on display and even have a chance to interact with the animals and staff.

The aquarium offers regularly scheduled feedings for many of the animals on display, which visitors are encouraged to attend. Guests can watch as staff feed otters, sharks, penguins and even the crocodiles in the aquariums collection. Also offered are regular aquarium talks which aim to educate and explore the life cycles and conservation hurdles facing the various animals in the aquarium exhibits and in the original habitats that the aquarium recreates. Topic include “Sloths are for Kids,” and discussions of the difficulties surrounding modern conservation efforts for jaguars.

The Dallas World Aquarium partners with local businesses and companies and the local Dallas Public School District. It employs a number of full time students from the nearby Yvonne A. Ewell Town view Magnet High School’s School of Business and Management, offering students work-study opportunities that teach genuine business techniques and practices of offer a chance to learn about the real life challenges of running and maintaining a zoo and aquarium.

The aquarium also entertains field trips from local schools and organizations, providing orientation and study materials along with preplanning assistance.

The Dallas World Aquarium’s website features two different livestreaming cameras which offer web surfers the chance to see some of the marine life from the comfort of their own homes. Two cameras include the Manatee Cam and the Shark Cam. 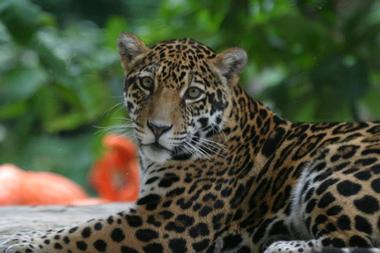 
The Dallas World Aquarium aims to aid conservation effort by partnering with international organizations and zoos and housing threatened and endangered species, which through cooperative breeding programs the aquarium hopes to reverse the alarming and destructive pattern that these animals are witness to in their home environments.

The aquarium’s conservation programs have included a wide variety of efforts and joint initiatives in South American. In 2012 the Aquarium supported the Instituto de Pesquisas Ecológicas (IPÊ)’s study on the population dynamics of the Amazonian Manatee, and in 2014 the aquarium supported a radio satellite tracking program in the El Pantanal region of Brazil designed to track jaguars and offer insights into the jaguars’ range, territory and interactions with local human activities.

The DWA has also partnered with a number of organizations in Peru to support conservation efforts there for a number of species, including a variety of primates, manatees, and birds, including the cock-of-the-rock, Torrent ducks and Andean geese, which sees the aquarium supporting the research efforts of the University of Alaska at Fairbanks.

The aquarium has partnered with the Venezuelan government on initiatives to aid the ecosystems of the Orinoco, reproduced in Dallas in one of the DWA’s centerpiece exhibits. They have allied with numerous government agencies on programs directed toward animals such as the Orinoco crocodiles, river otters, howler monkeys, manatees, and even the world’s largest raptor, the massive Harpy eagle.

Other conservation efforts by the Dallas World Aquarium include programs in Costa Rica, where it obtained three sloths from a rescue and rehabilitation center. It also partners with Mexico’s Miguel Alvarez del Toro Zoo in Chiapas to help the conservation of the native habitat of the quetzal and horned guan. In Panama, the DWA has worked with multiple organizations toward the conservation of three-wattle bellbirds, as well as other local birds including cotingas, xenarthas, and other raptors. 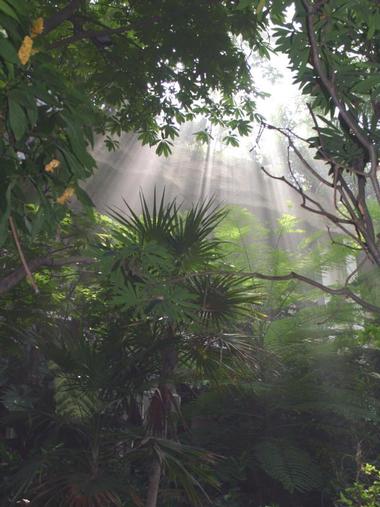 
The Dallas World Aquarium houses a number of cafes and restaurants for its guests as they peruse the massive campus and variety of international ecosystems. Visitors can eat at the Eighteen-O-One, the aquarium’s full service luncheon restaurant, the Café Maya, or the Jungle Café.

The Dallas World Aquarium can accommodate rentals for various private and social functions. A number of its exhibit spaces can be reserved or include event and entertainment spaces that can provide space for rental events. The Tribal Gallery abuts the massive central Orinoco gallery, and can house 250 seated guests or 300 for a cocktail buffet. It includes an immersive window that stretches from floor to ceiling and peers into a tank filled with manatees and smaller marine life including turtles, catfish and rays. The smaller Orinoco Room can accommodate 50 seated or 100 standing guests and include a full bar. The rainforest building also houses the Jungle Café up on its canopy level, which offers guests a snack bar, café, full bar and a kitchen.

The Reef Room offers guests the option to rent a room that is surrounded by reef life including cuttlefish and seadragons, and seats up to 125 or 250 for buffet. The Port Hole accommodates 400 seated or 600 informal and offers views of downtown Dallas. Café Maya is also available and offers its 125 or 250 guests views overlooking the Mundo Maya exhibit and a seasonal outdoor area. 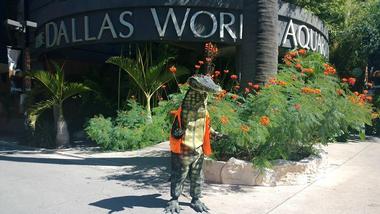 The Dallas World Aquarium is conveniently located in the heart of downtown Dallas and encourages guests to use environmentally sound public transportation, and offer’s a dollar off to those guests who arrive via public transit. Commuting guests can easily find the aquarium from any of the major highways including the I-35, I-30, I-75 I-45 and I-20 by taking Dallas and McKinney exits and following the signs.

Back to: Best Things to Do in Dallas, Texas

Things to Do in Texas: Dallas World Aquarium

Things to Do in Texas: Fort Worth Botanic Garden