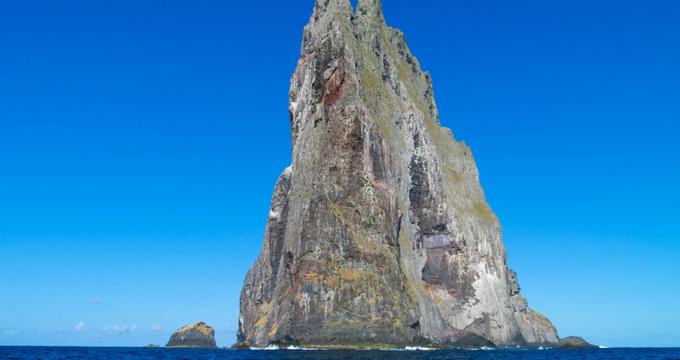 Taking its name from Lieutenant Henry Lidgbird Ball, who on the same trip discovered Lord Howe Island, which lies around 20 kilometers northwest, Balls Pyramid is not technically a pyramid, at least in the sense that it is not manmade. It is in fact an erosional remnant, part of a volcano that is around 6.5 million years old. The formation measures in at 562 meters tall, 1,100 meters long, and 300 meters across, and it is the single tallest volcanic formation or stack on Earth and well worth your interest.

The first attempted ascent of the pyramid was made by a Sydney-based team in 1964. Dick Smith tried to scale the formation with participants from the Scout Movement; unfortunately, they had to give it up on day five when supplies ran short. The first documented successful ascent was made by climbers of the Sydney Rock Climbing Club in 1965. Consisting of Jack Pettiegrew, Bryden Allen, David Witham, and John Davis, they now hold the prestigious claim of quite likely being the first humans to stand atop the peak. In 1979 Dick Smith went back to successfully crest the summit and place the New South Wales flag atop the peak to officially claim the island as Australian territory.

In 1982 climbing was forbidden on the pyramid after changes in the Lord Howe Island Act. In 1986 even visitation was banned. These policies were relaxed in 1990 and you can now apply to visit or climb the pyramid under strict supervision. This didn’t stop two eager climbers, however, who back in 2014 decided to yacht to the island and attempt a one-day race to the peak without the proper authorization.

The reason the pyramid is so fiercely protected is that it is believed to be the last existing place you can find the Lord Howe Island stick insect. The species was thought to be extinct after its last sighting in 1920 on Lord Howe Island. It wasn’t until the 1964 ascent unearthed a deceased specimen that scientists reasoned that there may still be a surviving colony on Balls Pyramid. Subsequent trips to the pyramid continued to provide more carcasses, but it wasn’t until 2001 when a team of conservationists and entomologists visited the site that they discovered living examples of the species. They were found to inhabit the area underneath a Melaleuca howeana shrub about 100 meters up the pyramid, which was only roughly 6 by 30 meters in size. It was an incredibly small population of only 24 insects, 2 of which were removed and taken back to Australia. They have now been bred successfully with the aim of reintroducing the species to Lord Howe Island. Another population of the insects was spotted at a higher location amongst a sedge thicket during the unauthorized ascent in 2014. This confirms that the insects are a little less confined than first believed.

Whilst you will need to apply for permission to climb the pyramid, there are tours operating regularly that take tourists to see the breathtaking sight up close and personal. It rises from the water so severely that it is quite daunting as it towers into the sky. It is an ancient formation with a rich and important scientific and geological history and well worth the boat trip.

Best Aquariums in the World: The Aquarium of Western Australia