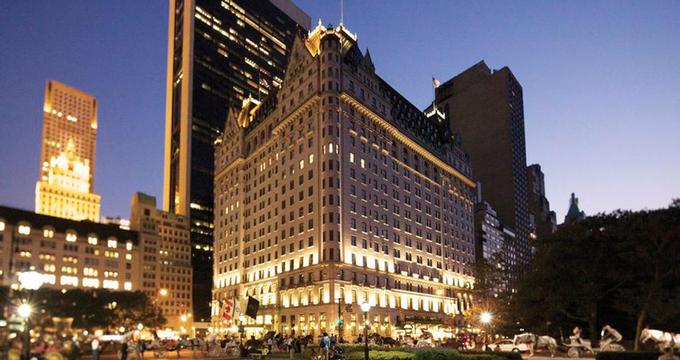 The Plaza has been featured in numerous movies and is one of the most famous hotels in the world. The hotel has recently been renovated, preserving its historic ambiance. The renovation has added several specialty suites such as the Fitzgerald Suite inspired by the "The Great Gatsby."

If you are planning a honeymoon, this is one of the top romantic hotels in the city.

There are 282 guest rooms and suites, a new Champagne Bar and Rose Club.

For the ultimate indulgence, book one of the 102 luxury suites which offer spacious layouts and 24-hour butler service. Families receive special perks and amenities. Try the Eloise suite for your little girl.

Check into the Fitzgerald Suite at the Plaza

Check into The Fitzgerald Suite at The Plaza, a uniquely designed and decorated luxury suite which was launched in honor of the hotel's role in Baz Luhrmann's film adaptation of F. Scott Fitzgerald's "The Great Gatsby."

The inspiration for the design of the suite was the Jazz Age and the 1920s. The idea was to make you feel like you are a guest in a hotel described in one of Fitzgerald's novels. The suite includes photos of F. Scott and his wife who often stayed at the hotel. You will also find F. Scott Fitzgerald's complete works, documentaries and movies that have been made about either him or his work.

A series of coffee-table books in the suite evoke summers on Long Island's Gold Coast and the fabulous New York of the Roaring Twenties. The suite also includes artifacts from the movie, including Tom Buchanan's sporting trophies. Take a long luxurious bath and relax with a book or a movie.

Attend a business conference in one of the hotel's elegant meeting rooms.

25 Best Things to Do in Manhattan on a Date