Things to Do in Hot Springs: Magic Springs Theme and Water Park 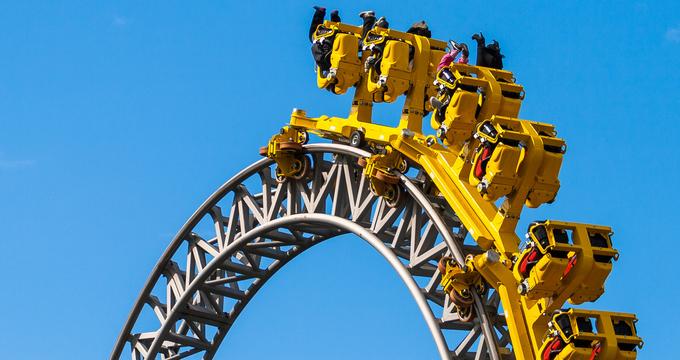 Located in Hot Springs, Arkansas, Magic Springs Theme and Water Park is an amusement park featuring five roller coasters, including the X-Coaster, the only SkyLoop coaster in operation in North America, along with nearly two dozen family, thrill, and water rides. The first incarnation of Magic Springs Theme and Water Park was opened in July 1978. The park was plagued by investor debt in its early years, and as a result, was sold to businessman Melvyn Bell in the early 1980s. Bell soon ran into his own financial troubles with the venture, and in 1995, the park was closed and put up for foreclosure auction.

Belgian company Fitraco purchased the park at the auction and approached Ed Hart, CEO of Themeparks, LLC, with a proposal for improvements and reopening.

The park was reopened for the 2000 season, after a bond issue to finance the park’s operation was approved by local voters. While initial season attendance exceeded projections, declining attendance the following seasons prompted expansions, including the addition of the park’s Timberwood Amphitheater concert venue. Throughout the 2000s and 2010s, the park changed ownership several times, eventually being sold as part of a bundle sale to Kansas City company EPR Properties in 2016. As part of the sale, management for the park was handed to Premier Parks, LLC.

Today, the park boasts five roller coasters, along with a variety of rides for all ages, including a full water park area. The park’s most notable roller coaster is its X-Coaster, manufactured by German engineering company Maurer Söhne. The SkyLoop XT-150 roller coaster, the only of its kind in North America, features a 150-foot vertical entry ascent before completing a 360-degree corkscrew roll while suspended in midair. Though talk of removing the coaster to make way for water park expansions was publicized in 2012, plans were cancelled and the coaster remains in operation today.

Other park coasters include the classic wooden Arkansas Twister, which contains a 92-foot drop overlooking the park’s amphitheater, and The Gauntlet, a Vekoma-designed suspended steel coaster with five inversions. Two smaller mine train coasters are also offered, the Big Bad John, which formerly operated at Dollywood under the name “Thunder Express,” and the kids’ coaster Diamond Mine Run. Thrill rides at the park include The Hawk, a Zamperla-designed ride that loops riders upside down in clockwise and counterclockwise rotation, reaching speeds of 13 rotations per minute. Plummet Summit, a splashdown-style flat boat ride, features a 50-foot final plunge. For an additional fee, the SkyShark skydiving ride raises riders 115 feet in the air before dropping at speeds of up to 50 miles per hour.

In addition to the park’s rides, the Timberwood Amphitheater offers concerts on Saturdays throughout the park’s operating season. Daily entertainment is also offered at the Lakeside Theater and Pinecone Theater. A small game area includes opportunities to win prizes at games such as plinko, darts, and a ladder climb, and several gift shops offer souvenirs, apparel, and accessories. Onsite dining options for individual visitors offer burgers, pizza, fries, and other American fare.

Group packages are available for schools, businesses, and religious organizations, including picnic options for large groups. Special events hosted at the park throughout the year include the Education in Motion school days, which tie ride experiences into classroom curriculum, and the annual Magic Screams Halloween festival.

21 Best Things to Do in Fort Smith, Arkansas

21 Best Things to Do in Hot Springs, AR

16 Best Things to Do in Fayetteville, Arkansas