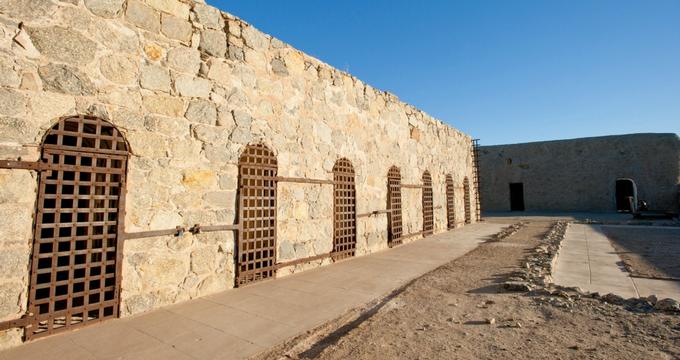 During Yuma Prison’s thirty-three years of operation, the jail saw a total of 3,069 prisoners live within its walls. The Yuma Territorial Prison State Historic Park is a great way for visitors to see a part of history while at the same time experiencing the same cells that some of the country’s most hardened criminals call home.

The city of Yuma experienced an influx of immigrants as they rushed their way to the gold fields of California in 1849, and when gold was found on the Colorado River in 1858, the town experienced a population boom. Fourteen years later Yuma was incorporated and became the county seat of Yuma County.

In 1875, a territorial prison project was authorized by Legislature, and given a $25,000 budget. Groundbreaking took place April 28, 1876, with some of the prison’s first inmates help build their own cells. On July 1, 1876, the first seven inmates of the Yuma Territorial Prison moved in.

Less than two years later, the prison saw its first female convict, Lizzie Gallagher, move in. Around that same time in 1878, J. Lewis became the first inmate to successfully escape the prison. A water reservoir was constructed for the prison in 1881, while another improvement, a guard tower, was built the following year.

The late 1800s saw several other events brought to the penitentiary, with electricity being provided in 1884, and the Sally Port Hospital completed in 1885. Additionally, during the 1890s, women’s cells were built as was a library.

During the first decade of the 1900s, the prison completed a new yard, and built maximum security cells. Then, just thirty-three short years after it opened, the Yuma Territorial Prison closed its doors in 1909, moving its inmates to Florence.

In the following years, the prison served the state of Arizona in a variety of ways, one of which was as a guard tower used for WWII spotting. Finally, in 1961, the Yuma Territorial Prison, became Arizona’s third state park.

Yuma Territorial Prison State Historic Park provides many points of interest for visitors. Most notably, the View Deck, Guard Tower, Sally Port, Museum, and Cell Block, all offer a fantastic view of what life might have been like as an inmate at the prison.

View Deck- The View Deck offers panoramic observations of the Colorado River and granite outcroppings that formed the Yuma Crossing. It also provides a excellent views of many other historic locations including the Quechan Indian Nation St. Thomas Mission and two historic bridges.

Guard Tower- Explore the guard tower that was once the prison’s original water supply. The tower provides a commanding view, overlooking the prison to guard against would be escapees. A great view of the Yuma East Wetlands Environment Restoration project is also seen from this historic tower.

Sally Port- The Sally Port is one of the few remaining adobe structures from the Yuma Prison circa 1876. The gateway was a checkpoint for prisoners that were entering or leaving the facility. Sally Port has been restored to its original structure.

Museum- The museum, built into what was once used as the prison mess hall, was designed using 60,000 bricks that were made during the Great Depression of the 1930’s by “Yumans”. The facility operated as a city museum until 1941, at which time the Arizona State Park took over management. A complete overhaul of the museum and its exhibits were completed in 2010.

Cell Block- This area, also authentic to the original Yuma Prison, offers a sense of what life was life as an inmate. Visitors experience the confinement of the infamous “Dark Cell” which was used for troublesome prisoners.

Prison in Hollywood- While the most famous reference to the prison in film is “3:10 to Yuma”, many other films have been shot on location. These films include:

· To Kill a Memory

· Life in a Western Penitentiary

· Gathering of the Gunfighters – January

In addition to these events, the Yuma Quartermaster Depot State Historic Park offers a self-guided tour that provides exhibits such as the Corral House, Storehouse, Quartermaster’s Office, Water Reservoir, and Quartermaster’s House and Kitchen

More Things to Do in Yuma

12 Best Things to Do in Globe, Arizona