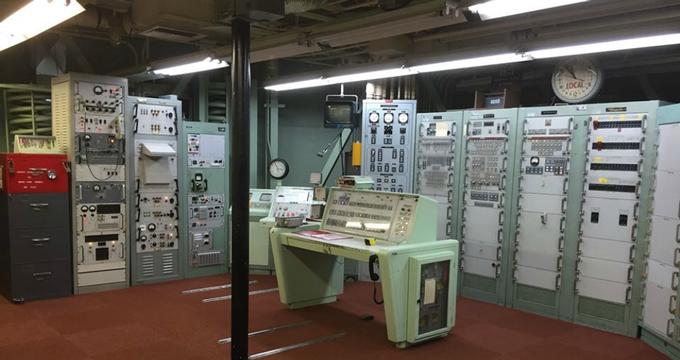 The facility teaches visitors about the history of the Cold War in America and the threat of nuclear war. For over 20 years, 54 Titan II facilities across America were on alert. Each missile was capable of launching from its underground silo in less than 58 seconds to deliver a thermonuclear warhead of nine megatons to destinations as far as 6,000 miles away in under 30 minutes. Visitors to the Titan Missile Museum can see the missile, its launch site, and the associated facility that housed crew members.

History: When the missile site named “launch complex 571-7” was deactivated in 1982, plans immediately began to convert the site into a museum. By 1985 interested parties had convinced the Air Force, Tucson Air Museum Foundation Board (now the Arizona Aerospace Foundation) and Tucson community that a museum was worthwhile, and permission to convert the site was granted. Several modifications were made to the site to ensure safety, and to demonstrate that the missile was no longer operational. First, the missile was stored on the surface of the site for 30 days to allow satellites to photograph it and confirm it was no longer operational. Then, prior to lowering it into the launch site, holes were cut in each of the propellant tanks as well as the re-entry vehicle’s heat shield.

A large window atop the launch site, with the door partially open, allows for continued viewing by visitors and satellites. In 1986, the museum opened to the public. Close to ten years later, in 1994, the site was declared a National Historic Landmark. Although the launch complex was just 31 years old when it received its landmark status, a rarity, it is one of only two intercontinental ballistic missiles sites in the world to have been preserved for public viewing. The museum receives no government funding and relies entirely on private donations and admissions fees. It is currently managed by the non-profit Arizona Aerospace Foundation whose mission is to promote aerospace education through the preservation of the history of flight. In addition to the Titan Missile Museum, the foundation manages the Arizona Aviation Hall of Fame and the Pima Air and Space Museum, both in Tucson.

Ongoing Programs and Education: Guided tours are the only way visitors can see the missile site, and there are several tours to choose from. One-hour guided tours take guests 35 feet underground into the missile complex, and to level 2 of the missile silo. Tours finish above ground, looking down at the missile from the top of the launch duct. The 90-minute Director’s Tour takes guests through the same areas, but under the direction of the museum director, Yvonne Morris. Ms. Morris is a veteran Titan II Missile Combat Crew Commander, and speaks to the realities of living as a crew commander during the Cold War Era. Beyond the Blast Door tours are 1 hour and 45 minutes. These tours cover the same areas, with the addition of a look inside the crew’s sleeping quarters, and the opportunity to stand directly below the missile at 100 feet below ground. Titan Top to Bottom Tours showcase the entire missile complex. Top to Bottom tours run approximately 5 hours. The museum offers overnight experiences for those who wish for an immersive experience.

Visitors should be advised that some tours are not handicap accessible; many require guests to climb ladders, or fit though 2-foot wide spaces. All tours require closed-toed, rubber-soled shoes. A Junior Missiliers program for youth gives young visitors a booklet with games to complete during their tour. Children who complete the booklet receive a badge and certificate. School and youth group tours for children in grades 5 through 12 are available free of charge. School and scout group tours teach the principles of rocket flight through hands on activities and experiments. The museum also offers pre-visit activities. The 90-minute pre-visit programs vary in complexity and approach and are available for download from the museum’s website. Ham radio operators are invited to broadcast and listen on the historic discone antenna at the museum. The 80-foot tall antenna was built in 1963 by the Collins Radio Company.