Things to Do in Arizona: Havasu Falls 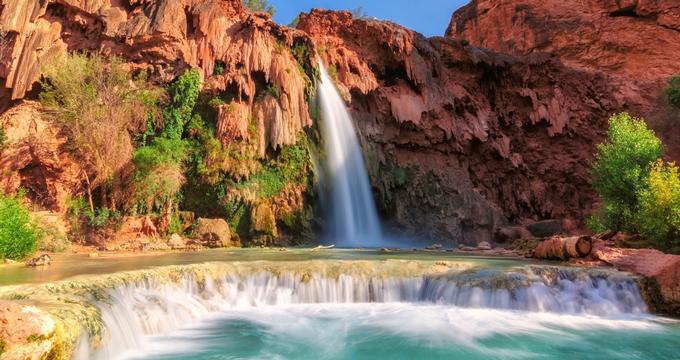 Located inside the Grand Canyon in Arizona, Havasu Falls is a waterfall located along Havasu Creek, a tributary of the Colorado River. As part of the indigenous Havasupai tribal lands, it is a major natural and recreational tourist destination in the southwestern United States. Arizona’s 277-mile-long Grand Canyon has been slowly carved by the Colorado River over the past several million years of Earth’s history, with the river’s waters cutting through many layers of rock as the Colorado Plateau’s land has been continually uplifted by geologic activity.

The Canyon has traditionally been inhabited by various indigenous American tribes, including the Navajo, Paiute, Yuma, and several modern tribes of Pueblo people, who consider the canyon a notable holy site. The primary inhabitants of the Havasu Canyon area are the Havasupai people, a Yuman-speaking tribe that once occupied a sect of land in the Canyon roughly equal to the size of the state of Delaware. As a result of European settlement in the American West and the eventual development of the Grand Canyon National Park, the Havasupai’s land has diminished considerably, now limited to an approximately 185,000-acre reservation in Coconino County, Arizona.

The Havasupai people are closely associated with the waters of Havasu Creek, a 50-mile tributary of the Colorado River which flows into Havasu Springs and through the village of Supai. The creek’s waters are well known for their unique blue-green coloring, which serves as a naming source for both the creek itself and its indigenous people, as havasu translates to “blue-green water” in Yuman. The coloring of the water is due to the calcium carbonate that lines the creek’s limestone banks, which also contribute to the creek’s constantly-changing landscape, as rapid mineralization of substances within the water causes new diversions to form quickly within the course of the year.

Today, the Havasupai’s primary means of subsistence is tourism to the waterfalls and natural sites of the Havasu Creek area. Several major waterfalls flow along Havasu Creek, including Upper and Lower Navajo Falls, Mooney Falls, and Beaver Falls. The third waterfall along the creek, Havasu Falls, which is located approximately a mile and a half north of Supai, is its most notable tourist site, attracting thousands of hikers and visitors annually. Prior to the flood of 1910, the falls was known as Bridal Veil Falls, which flowed in a near-continuous sheet over the area’s 100-foot cliffs, but floodwaters changed the falls’ flow into the single stream falling from the notch it traverses today. Natural pools created by mineralization are located at the bottom of the falls, although the pools have greatly diminished in number due to flooding in the 1990s, and as such, a man-made dam has been constructed to preserve the remaining pools.

The hike to the falls is a 10-mile hike from the Hualapai Hilltop parking lot area and is not recommended for beginner hikers. The falls is accessible via a small side trail off of the area’s main hiking trail, which opens into a plateau area for viewing. A small rock shelter behind the falls is accessible via swimming and allows for views of the falls’ water from behind. A large picnic table area is also available on the opposite side of the creek from the falls, and a nearby Havasupai Falls Campground is provided for overnight accommodations. As the falls are on reservation land, visitors are asked to leave no litter and to bring no drugs, liquor, weapons, or pets along on their hikes.

In order to hike to the falls, visitors must request permits from the Havasupai Indian Reservation. Reservations may be made by phone or online via the Reservation’s website, but permit space is often limited. Multi-day hiking and camping tour packages are offered through Wildland Trekking, which provides tour guides elaborating on the area’s natural and cultural history. Three, four, and five day tours are offered, including backpacking options, family spring break tours, and a Premier Tour that includes a night of lodging with a group dinner on the Grand Canyon’s rim.

The Havasupai Reservation may be reached from Highway 66, near the community of Peach Springs, Arizona, which provides access to Indian Route 18 and Hualapai Hilltop. The Hilltop provides access to the village of Supai via an eight-mile trail that may only be traveled on foot or horseback. As the most remote extant community within the contiguous United States, Supai is known as a thriving cultural and artisan community, showcasing traditional indigenous lifestyles. A lodge within the village provides accommodations for visitors, and a small store offers travel goods and convenience foods. A visitors cafe offers American fare such as burgers and fries.

More Things to Do in Arizona

11 Best Things to Do in Benson, Arizona

7 Best Things to Do in Elgin, Arizona