Things to Do in Arizona: Canyon de Chelly National Monument 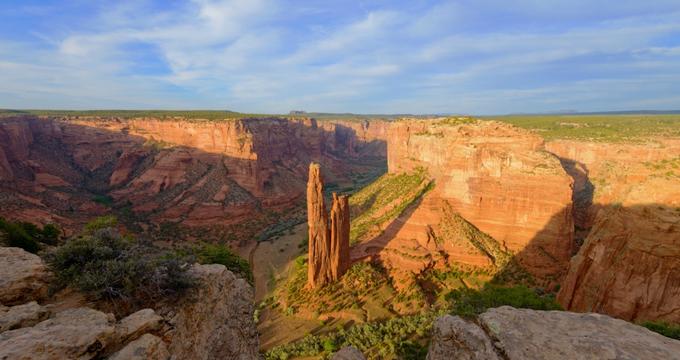 Located in Apache County in northeastern Arizona inside the Navajo Nation Native American territory, Canyon de Chelly National Monument is one of the United States’ most-visited national monuments, commemorating the ruins of several indigenous tribes that historically populated the area. The colorful cliff walls of the Canyon de Chelly area were carved by streams over the course of millions of years, combining with the force of land uplifts pushing the ground away from the headwaters of the Chuska mountains.

Prior to the arrival of Europeans in North America, the Canyon de Chelly area was home to a number of indigenous tribes, including the Ancient Pueblo people, the Hopi tribe, and the modern-day Navajo, descendants of the Athabaskan peoples of Northern Canada. The area’s rich natural resources, including its prevalent water sources and fertile soil, provided a habitable environment for many generations of agricultural dwellers. The name for the region comes from a Spanish translation of the Navajo tséyi, which means “inside the rock.”

In 1805, the Canyon was invaded by pioneer forces, led by Lieutenant Antonio Narbona, who would later become the governor of New Mexico. The Navajo remained in conflict with the pioneers through 1864, when the Battle of Canyon de Chelly resulted in 23 Navajo deaths and more than 230 captures, along with the widespread seizure and destruction of homes, sheep, and crop lands. As a result of the battle and its ensuing demoralization among the Navajo people, the tribe surrendered their lands and were relocated to Bosque Redondo, New Mexico, a period now referred to as the Long Walk of the Navajo.

In 1931, the Canyon de Chelly area was declared a National Monument by President Herbert Hoover in order to preserve the area’s rich cultural and archaeological history, and was added to the National Register of Historic Places in 1970. Today, the monument encompasses more than 84,000 acres of Navajo Nation land, and the National Park Service works in cooperation with the Nation’s Navajo Tribal Trust to preserve the resources and legacy of the monument’s area, the only NPS facility to be managed in such a joint manner.

The park is accessible via the town of Chinle, which provides lodging and camping accommodations as well as restaurants, grocery stores, and other services for tourists. A Visitor Center with a bookstore, informational exhibits, and a picnic area is located three miles inside the park along Route 7, and the nearby Cottonwood Campground, managed by the Navajo Parks and Recreation Department, provides grills, tables, restrooms, and space for RVs. Route 7 then splits into the North and South Rim Drives, which provide automobile access to major sites and scenic overlooks within the park.

The 34-mile roundtrip North Rim Drive includes the Antelope House, Mummy Cave, and Massacre Cave Overlooks, providing views of cliff dwellings and historic indigenous sites. Dating back to at least the 1300s, the Antelope House Ruin was excavated in the 1970s, featuring a circular plaza area and decorated with antelope illustrations by Navajo artist Dibe Yazhi. The Mummy Cave Ruin area showcases one of the largest Pueblo village remains in the area, featuring a tower complex and east and west ceremonial and living alcoves, and Massacre Cave commemorates the 1805 massacre of 115 Navajo on the run from Lieutenant Narbona’s forces, all of whom were killed while hiding in the cave area.

Along South Rim Drive is the park’s most notable geologic attraction, Spider Rock. Rising 750 feet above the canyon floor, the sandstone spire is frequently used in advertising and television commercials. Views of ancient Navajo farmlands can be seen from Tsegi Overlook, while the confluence of Canyons de Chelly and del Muerto can be observed at Junction Overlook. The White House Ruin area, built nearly 1,000 years ago, provides access to the White House Trail, the only area of the canyon that may be hiked without a permit. The 2.5-mile roundtrip trail allows visitors to descend 600 feet into the canyon to view Chinle Wash and the White House dwellings, named for their white plaster walls.

In addition to self-guided tour information provided at the Visitor Center, a number of Navajo Nation companies offer horseback, hiking, and vehicle tours of the Canyon. Organized hikes are presented periodically, embarking from the Visitor Center as a trailhead, often in conjunction with special events and observance months throughout the year. During the summer months, ranger-led hikes, talks, and other free public programs are offered on a regular basis, and several annual special events are held, including a Halloween costume contest and a birthday celebration for the park in April.

More Things to Do in Arizona

Things to Do in Flagstaff, Arizona: Walnut Canyon National Monument